I firest leanred about Skylanders Spyro’s Adventure at the Time to Play Holiday Showcase that I went to last month. I didn’t get to play and that is probably a good thing because I would have spent my entire time there playing this game. I was sent a copy of Skylanders Spyro’s Adventure for the Wii. It arrived today and I’ve spent about 4 hours playing the game, playing online and leveling up “my” character, Trigger Happy. I haven’t had this much fun playing a Wii game in a very long time. In fact, I haven’t played my Wii in months. I unpacked it only a couple of weeks ago so that Eva could play a kids game. Well, I’ll probably be playing a lot more now because of Skylanders.

Skylanders is a game from Activision that brings a whole new way to play to video games. It is one of the most innovative and fun games I have ever played. The game comes with a Portal of Power upon which you place your Skylanders. Skylanders are protectors of Skylands who were banished to Earth by Kaos. On Earth the Skylanders are small plastic statues but when placed on the Portal of Power they are transported back to Skylands. Sounds a bit corny but it is freaking awesome when you see it in action. 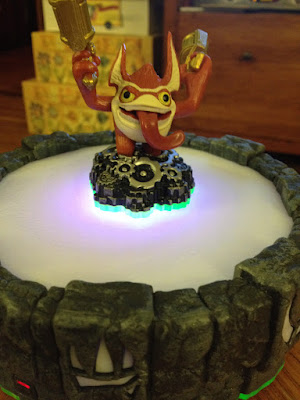 My Boy Trigger Happy on the Portal of Power

The started pack includes three Skylanders, a Portal of Power and the Skylanders Game. I received the Wii version. There are versions for the Wii, XBox 360, PS3, PC and Nintendo 3DS. The very, very cool thing is that you can use your Skylander on any one of those platforms. When you bring your physical Skylander figure to your friend’s house and place it on the Portal of Power your character is there with all of their power ups, experience and special items. So as you play and level up you don’t have to restart when you play with your friends. 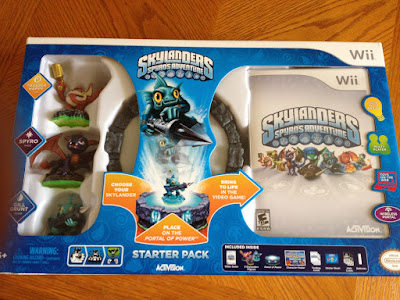 The Starter package also contains Trading cards for each character. The characters included are Spyro the Dragon, the main character of this game, Trigger Happy and Gill Grunt. Each character is associated with an element like Fire, Water, Air but then also Magic, Tech and Undead. Throughout the game there are special sections that only characters of specific elemental alignments can access. The great thing is that you can swap out characters at whim. It is so easy and it was really really quick to see this happen. I was impressed with the speed that the characters swap in and out. 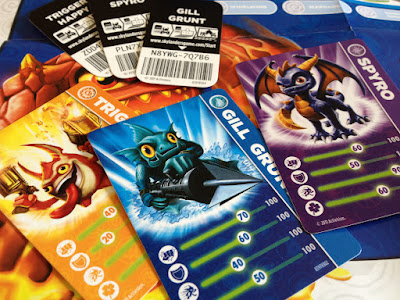 In addition to the Trading cards there are online game code cards, stickers and also a poster showing all of the available Skylanders that you can purchase. Each Skylander has their own abilities, strengths and weaknesses. With the online game code cards players can register their individual Skylanders into their online Lair. There they can play additional games and level up their characters online. There are tons of mini games for the characters to play. One is very reminiscent of some perturbed avians but it is cool and different enough to be quite enjoyable. There is a social aspect to this game play as well. Players can invite friends to their online lairs, go on adventures on the mainland (a place within the online universe). The game can not only be played on your game console, but these social aspects extend the game play even more. Also, the portal of power connected to my PC with no problem and I could use that to port my characters into the online world. 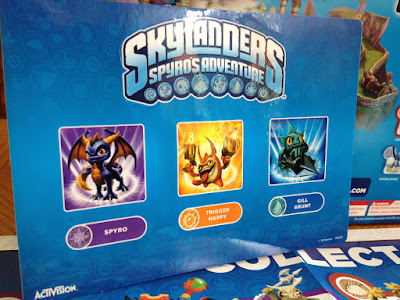 To acccess the online game players can go to http://universe.skylanders.com/ and the best thing is that you don’t have to own the game to play the online part. So if you are the kid in your circle of friends who does not have the game you can either buy one of the physical Skylanders characters at your local store for about $8.00 or you can get a 3 pack of characters for $20. There are even adventure packs that have power up figures and figures that unlock new playable worlds like the Pirate Seas adventure pack. I’m buying that one as soon as I can find it. So, if you get a character you get a game code and can create an online account and play with that character. You can even create and account if you have nothing at all and Eon, the spirit guide from the game will give you a starter online character.

The nice thing about having a physical character is that you can store all the stats, achievements and more on the character because of the “Brain” that is found in each Skylanders figure. This “brain” allows the character to cross platforms, level up and retain everything so that your character is always at peak levels when you want to play with them. 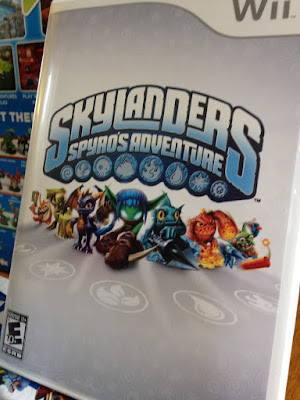 Eva, Allison and I each played the game on the Wii. It was easy enough for Eva to play except she hasn’t gotten the hang of moving with the nunchuk but that will come in time. Two players can explore at once. You have to stick close because if you get to far away from each other a “tether” gives each player a little force feedback to say, “stick together”. The Skyland world is huge and very colorful and funny. There are characters like Flynn, Voiced by Patrick Warburton who are there to help and entertain. I was very pleased to hear his voice in the game because he is very funny. Flynn is a balloonist who helps take your characters to different places in the world. You’d work with him a lot. There are other great characters too that you meet along the way and who come back to your home base and help. Some can help you get powered up weapons and others can help train and power up abilities. 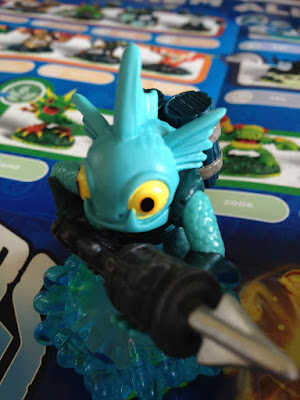 As you go through the world you can swap out your character quickly through the portal. The portal is a round plastic pedestal that can fit two Skylanders or two Skylanders and a power item or two Skylanders and an adventure pack that opens a new world within the game. Swapping is so quick too. I primarily played with Trigger Happy but when I needed a water element type I could quickly swap in Gill Grunt and if I needed a magic element type I could swap in Spyro. Basically swapping takes as long as it takes you to physically move your character on and off the Portal of Power because, BAM, the character is there and playing as soon as it hits the Portal.

As you can tell I am super impressed with this game and am even staying up pretty late to review it (because I played with it for about 5 hours now). I can’t wait to play more, buy more characters and explore this world. Skylanders has brought me back to my Wii. 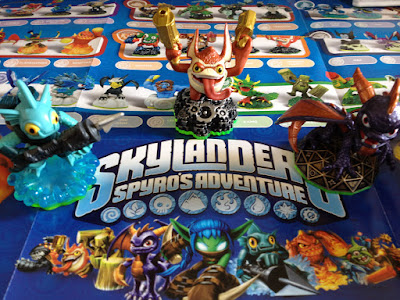 I know of another Activision property that would benefit from this play engine and that would be the Transformers. Can you imagine how collectible Transformers character at Skylanders sizes that you could take with you and play with friends would be? They would fly off the shelves and I think that this is what will happen with Skylanders figures especially when very special figures are made and released like powered up figures or something like that, chased or short packed figures. This game can easily become one of the most collectible physical, online and console games ever. The characters are so detailed and fun. The uniqueness of their abilities is also great and the opportunity to expand this universe is endless. I predict more versions of the game to come that will work with new waves of characters as well as with “classic” first wave characters. Yeah this will be a big hit. A must for your Holiday shopping.

Here is a video that explains the concept.

Here is a fact sheet of the game that dives into more details that I might not have touched upon in my review.

PRODUCT DESCRIPTION:
In Skylanders Spyro’s Adventure, you can ‘Bring Your Toys to Life’ in a boldly innovative adventure game where players collect real-world interaction figures and teleport them directly into the game using a mystical Portal of Power™.

Propelled by a story-driven adventure, penned by Academy Award-nominated Toy Story feature film writers, Joel Cohen and Alec Sokolow, players take on the role of a powerful Portal Master who can control over 30 different characters, including the beloved fire-breathing dragon Spyro. Players will embark on a fantastical journey into an amazing world, where they will explore mysterious, mythical lands, battle menacing outlandish creatures, collect gold and treasures, and solve interesting puzzles while on a quest to save their world from Kaos, an evil Portal Master.

Skylanders Spyro’s Adventure changes the way we look at toys and videogames, as well as how we interact with them by introducing action figures that become interaction figures and remember all of their dynamic experiences created in the game. For the first time ever, players can personally customize and power-up their toys, as well as bring them to life on a friend’s Portal of Power for co-op play and player-versus-player arena battles. Additionally, with the freedom to change characters whenever they like, Skylanders Spyro’s Adventure allows kids to utilize different interaction figures and strategies each time they play.

Exploration – As the tale unfolds, players will encounter a variety of vivid environments, each with its own unique look and feel, and each providing different challenges, puzzles, and the discovery of secret areas, rewards and mini-games.

* Note: The 3DS is a totally new adventure within the same universe and thus, Co-Op, PVP and mini-gamers are not available on 3DS *

Disclosure: I was provided with a Skylanders Spyro’s Adventure Starter pack for the Wii. I love the heck out of this game. That is my opinion and mine alone. Allison and Eva also liked it but not to the extent that I was taken with it. I think that is because I hogged the game all day. I play to purchase more figures and adventure packs because the game is so much fun.