I brought my talking Star-Lord action figure downstairs to play with the kids. They were delighted by the sound clips. They pretty much wore out the button, too. Eva bought some mini erasers that were shaped like ice cream and popsicles. Eva took the erasers and put them into the hands of Star-Lord. It cracked me up because instead of his blasters he had these two silly ice cream treats. Made me think of a post saving the Galaxy celebration treat. I got this toy when I attended the #GuardiansOfTheGalaxyEvent. Keep reading to download some fun activity sheets from the movie.

I got a great download file of fun Guardians of the Galaxy activity sheets. There are 12 coloring pages, a memory game and even some fun cut out controls for the Milano. How fun to make a cardboard spaceship for the kids to play in and outfit it with the flight controls for The Milano, Peter Quill’s ship. Just click on the image of Rocket below to download the .pdf file. 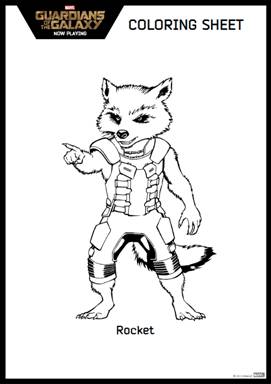