Today I received a box of Green Lantern stuff. I got two power rings, a DVD called Green Lantern: First Flight, a Hardcover Secret Origin: Green Lantern Graphic Novel, a Colossal Cannon Blaster and a Hal Jordan action figure with a Battle Shifters: Blade Attack toy. Green Lantern is one of those characters that got his start in the 1940s and then was revived and revamped in the 1950s. Most people probably know the 1950s Green Lantern, Hal Jordan more than any other Green Lantern before or since. Hal Jordan was a second generation test pilot and was a man who was utterly honest and born without fear. That is the man who was sought by a dying alien named Abin Sir when Sir crash landed on earth. Between what I knew already about the character and what I learned by watching the First Flight DVD and Brightest Day Graphic Novel I am now pretty well versed in Green Lantern Lore. I’m also very excited for the upcoming Green Lantern Movie. 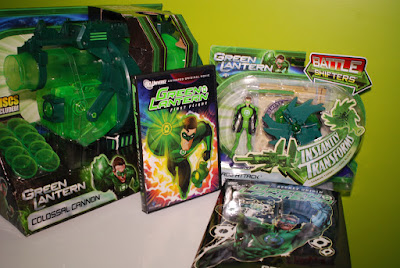 The movie Stars Ryan Reynolds as Hal Jordan, the man who will become Green Lantern. I like Ryan Reynolds. He has an everyman sort of quality about him that I enjoy. I’ve liked his work since Two Guys, a Girl and a Pizza Place. Although another person who was on that show is also someone I enjoyed very much. That would be Nathan Fillion. Nathan Fillion will be the the voice of Hal Jordan in the DVD Green Lantern: Emerald Nights. The fan community was divided over who should play the live action Green Lantern. Fillion would have been great back when he was filming Firefly and was in fighting trim. Fans cut together a bunch of his stuff to make an “Official” trailer for Green Lantern with Fillion as the star. While it was a good trailer I’m happy with the decision to have Reynolds in the role. Here is an actual trailer for the movie.

The DVD movie was awesome. I watched that today and enjoyed the whole backstory of this character. From what I’ve seen of the trailer of the upcoming Live Action Movie I think that many of the characters and their likenesses will be represented well in the movie. I also think that this will be a a good origin story of the character of Green Lantern.

Reading the Secret Origin: Green Lantern Graphic Novel was also useful in learning more about Green Lantern. Imagine being given the power to create anything that you would like from your imagination. Being able of Interstellar Travel and meeting beings from all over the galaxy. Such an amazing story of a character that I only sort of had an inkling about before today.

Along with the DVD and the Comic book there was the Ring that lights up when you click a button. Eva liked that very much. She was not a fan of the Colossal Cannon Blaster because it made noise. She is very sensitive to loud noise and the noise from this cannon she did not like. I liked it very much. It fit my hand easily and it fires small plastic (easy to lose, I started with 10 and have 5 left) discs. The canon lights and sounds are pretty cool and the discs fire pretty far. Definitely a toy for older kids. I watched my friend’s kids for an hour last night. Once the son’s Nintendo DS ran out of batteries he was receptive to playing with some physical toys. He liked the Blaster very much. He was shooting it all over the place. He wanted to take it home too. I gave him the second ring. 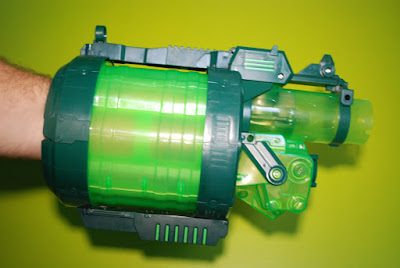 The Blaster was fun but I am more a fan of action figures. The Green Lantern figure is pretty simplistic. The arms and legs move and the head turns. The arms don’t bend and the legs don’t either so figure isn’t too playable. It comes with a transformable weapon called the Blade Attack. When it is coiled up it looks like a giant buzzsaw blade. Green Lantern can create these constructs with his mind and so a pretty destructive weapon would be a good weapon to have in his epic fights. If you push on the coiled up buzzaw it becomes a giant cannon instantly. The action figure’s hands fit this toy perfectly. It can stand up and hold the cannon or your can put the Buzzsaw in his hand as well. He can’t hold it up because it outweighs the figure 2 to 1. But your kids can pretend that Green Lantern is flying around and holding the buzsaw out in front of him. 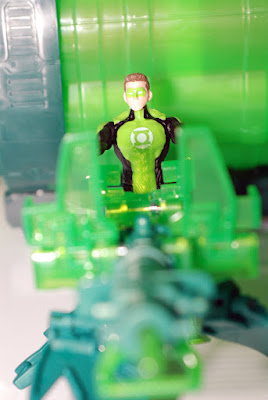 The transforming toy also fires a missile. It fires pretty far too. I removed that so that Eva didn’t accidentally shoot herself with it, or more likely lose it. She did like playing with the action figure. She kept asking me to transform the buzzsaw into canon again and again. When you press on it it bounced up pretty high and if done right will land to look like the canon. That doesn’t often happen but happens enough. 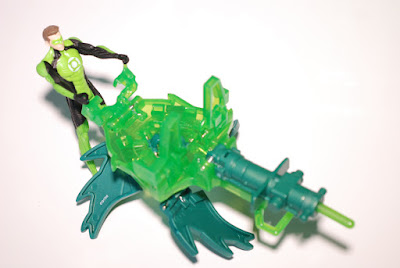 The Toys, Cartoon Movie and Comic book have certainly gotten me more in the mood to learn about Green Lantern and made me eager to check out the movie on June 17, 2011. 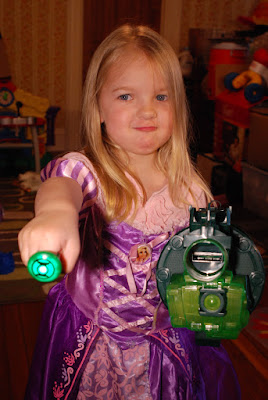 Even Princesses can Kick a little butt

Disclosure: In celebration of the upcoming Green Lantern movie from Warner Bros, Mom Select and Mattel shipped me a box load of Green Lantern swag for review.

2 thoughts on “In Brightest Day, in Blackest Night”