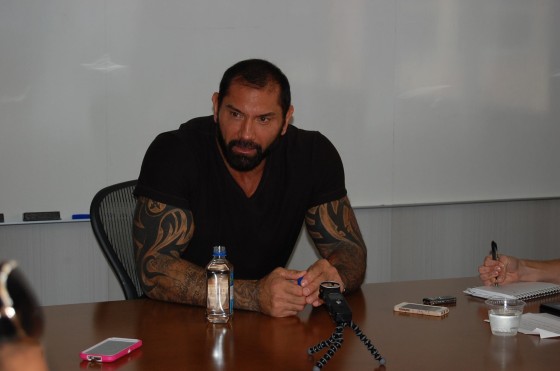 By now I certainly hope that you have seen the movie Guardians of the Galaxy. I saw it a few weeks ago at the #GuardiansOfTheGalaxyEvent and cannot wait till Wednesday night to see it again in IMAX. I was privileged to get to interview many of the actors from the movie including Vin Diesel, Chris Pratt and Zoe Saldana. One of the cast members I was looking forward to meeting and interviewing was Dave Bautista. Not because I was a wrestling or MMA fan, but rather, because I found the character of Drax so appealing. I wanted to know the motivations behind Dave’s choices while playing this role.

Dave Bautista is not what you think. He’s not pursuing acting to do purely action movies. He would love to do more character driven work, he would even be interested in doing some theater. While he was being interviewed Dave was very soft spoken and introspective. He spoke about the things that he loved about wrestling which were the un-televised stuff like helping out with charities like Make-A-Wish and other organizations. Being able to make a difference was the important thing. He took a big risk in leaving wrestling to pursue acting, but I think that once people see him portraying Drax in Guardians of the Galaxy they’ll realize that he made a solid decision. Dave was gracious and humble and is looking to do more character driven roles. He took the role because Drax isn’t simply a one note character, there is depth to Drax and certainly there is depth to Dave Bautista.

When asked how much of Dave’s wrestling and MMA training helped prepare him for the movie he replied, “None at all.” Making this movie was like nothing he had ever done before but being athletic did help him in the role. He picked up on things easily but was always looking to learn more from the stunt guys on the crew. “When they’d show me how to do stuff and I’d do stuff and I’d mess it up they’s say ‘Well, try it this way if it’s easier’ and I’d say, ‘No I like the way you did it because it looks cool that way so lets just show me how to do it that way.’ And I’d do it and do it until I picked up on it.” 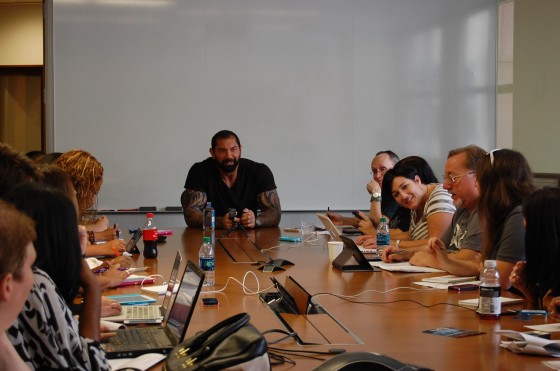 What attracted Dave most to Drax. Dave expressed how he wanted to do a character with an emotional range. He stated, “Which is something I needed for my career really bad because I think people had a certain perception of me leaving wrestling. They just saw me as that guy and I’m really not that guy at all.”

Being a Marvel Super Hero is something that is just starting to hit Dave. He talked about doing press in Singapore and how the support of fans for something they haven’t even seen yet has been overwhelming.

I asked the question, what were Dave’s comic book heroes growing up. Despite being a Marvel Super Hero the characters that were his favorites as a kid were Batman and Aquaman. We won’t hold that against him.

When asked what Dave’s favorite moment from the filming he told us about a giant dance party. He came alive when he was talking about that event and he loosened up much more. We continued to ask him more about his upcoming projects and he hasn’t ruled out doing more wrestling or MMA, but he’s very excited to be involved in more character driven work. As far as action he’s getting his action fix through the Marvel movies. He did mention that he’ll be in a Kickboxer remake, too.

Regarding Drax. “I think when people see Drax they automatically think that he’s going to be a kind of a one noted character. The type of character that all he’s good for is fighting.” Dave went on to say, “The way I approached Drax was not looking at him as a warrior but always as a father and a husband. I hope that people see that is basically who he is and all his rage really comes from heartbreak.” 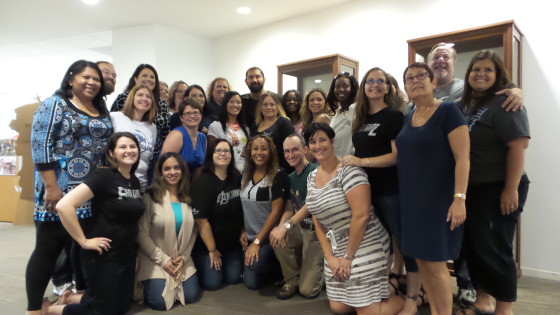 I thoroughly enjoyed our interview with Dave Bautista and I hope that you see and appreciate his range within his role as Drax in Guardians of the Galaxy. I also took a moment to thank him for his work and shake his hand. I was so impressed with him and it was a thrill to meet him.

33 thoughts on “Interview with Dave Bautista at the #GuardiansOfTheGalaxyEvent”