“You can be the King, you don’t have to be someone’s princess.” Zoe Saldana

During the #GuardiansOfTheGalaxyEvent that I attended a coupe of weeks ago I had the pleasure to be part of a group interview with Zoe Saldana who plays Gamora in the movie. Zoe has played many strong female roles in sci-fi movies including Lt. Uhura in the Star Trek reboots and Neytiri in the Avatar series. When speaking to Zoe you can’t help but notice the quiet grace of this fiercely intelligent and intense woman. Zoe told us about her motivations for taking the role and her input to make Gamora more than simply eye candy. Plus she likes the Thundercats so that makes her awesome in my book. 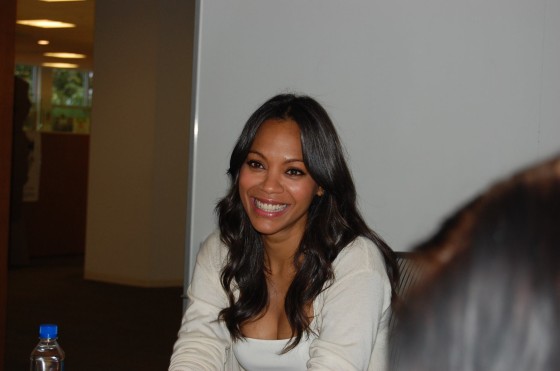 Zoe takes her role as a role model for young girls very seriously. Taking these roles that she takes is a selfish thing, it is for her but Zoe goes on to say, “To know that it will have an impact on young women is the selfless part.” Zoe fights very hard to make sure that her character is real and is relevant to the context of the story. “My character needs to feel relevant.” Zoe also explained that she (her character) needs to be involved in solving the problems within the context of the movie. Her character has to be more than eye candy, she has to have an active role as part of the team. For Gamora, she is so much more than a beautiful assassin. She has depth to her and she is also the person who ties the whole team together. Because of that Gamora couldn’t sit idly by while the men on the team made decisions, she has to participate.

When asked how she prepared for her role the main decisions for taking the role had to do with James Gunn. Regarding James Gunn Zoe says, “There’s just something about him that… He’s special. He knows what he’s doing, there’s a confidence in his word that you know he’s going to keep his word.” With that said Zoe then went on to say, “how am I going to make this character different than all the other action characters I’ve done before.”

Zoe pulls from real life when she prepares for her roles. She told us a story about a woman who created an artistic piece on a Spanish bullfighter that was shot on 65 frames per second of in all slow motion. The bull fighter does this dance to make the bull run to his death. She said to herself, “That’s Gamora, she is a bullfighter… She’s going to be a very graceful sword fighter.” Zoe’s Gamora is not going to be like any other Marvel female superhero.

Gamora is also an orphan who was taken from her home and forced to do bad things. To get into the mindset of the character zoe was reminded of the Lost boys of the Sudan. These are boys taken from their homes and forced into a life crime and violence. “Deep, deep down they’re good people. They were meant for greatness but their path was completely erased before it’s even begun. That’s Gamora and she’s just trying to give herself a last chance at life, to get out.” Zoe stated that she needs to approach this character from a very real place and approach it as if Gamora was a very real person who has had these experiences. Gamora is so interesting because she is conflicted. She is a good person but was raised to be a bad person.

While she did not read comic books she was a fan of cartoons. She enjoyed seeing the completed work instead of reading the books. Zoe is a fan of He-Man and She-Ra and Thundercats. I was so excited to hear this. Zoe went on to tell us that she would fight with her sisters over who would be Cheetara. I think she would be a perfect choice for Cheetara. So, if a live-action Thundercats movie ever gets made then we should all lobby for Zoe to be Cheetara.

Because she does not read comics and wasn’t as familiar with the character of Gamora to begin with she turned to her nephew. Her nephew was her teacher about Gamora. He schooled her all about the character. When Zoe said that Gamora was a “Badass” he corrected her that Gamora was an assassin with a strong sense of justice. He even gave his approval of Chris as Star-Lord when he met him on set.

Her favorite scene comes in a very critical part of the movie and I can’t tell you about it but it is powerful and involves the whole team but focuses on Groot.

As far as stunts go Zoe did about 50% of the stunts but her stunt woman Chloe did the real crazy stuff. Chloe is an award winning martial artist. 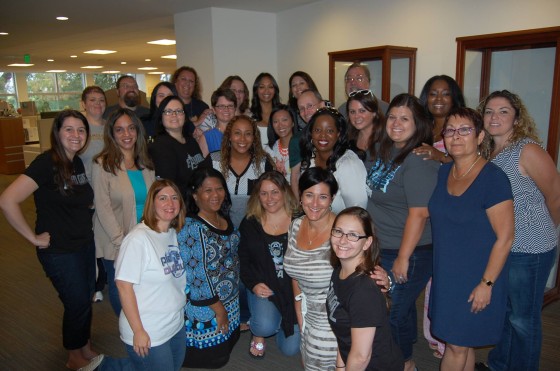 From the interview you get a sense that Zoe had a lot of influence on her character and she took her role very seriously. She worked with director, James Gunn to flesh out the character more and give her a more substantial and worthwhile role on the team. James was a great advocate for the ideas that Zoe had and worked to incorporate those ideas and suggestions into the character. You can clearly see the care taken to make Gamora an amazing character when you see Zoe’s performance in the Guardians of the Galaxy.