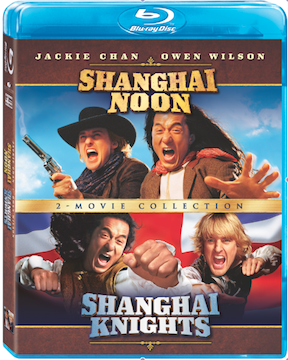 On May 7th a Blu-ray movie double feature was released. Jackie Chan and Owen Wilson as Chon Wang and Roy O’Bannon team up for the first time in Shanghai Noon and reprise their roles in the hilarious sequel Shanghai Knights. I received a copy of this Blu-ray disc to watch and review. Opinions are 100% my own. I am a fan of Jackie Chan ever since watching Rumble int he Bronx years ago. His amazing style of martial arts combines quickness and power with humor and incredible stunts. Where Jackie disarms with his fists, feet and anything he can get his hands on including his hair. Owen Wilson disarms with his quick wit and puckish charm. Put the two men in one movie and you have a recipe for movie success.

The Blu-ray set is also packed with fun extras like multiple featurettes on the making of the movie to one called Action Overload that showcases the best action scenes from the movie. One of my favorite scenes is when Jackie is on the run from some of the Native American warriors. They throw two tomahawks at Jackie and they each hit the trees on either side of him. Jackie pulls each out of the trees and spins them expertly in his hands and throws them back at the warriors. One warrior catches the tomahawk in mid air tosses it to the other warrior and proceeds to catch the other one as if they weren’t even tossed at them at all. Jackie’s reaction to this is pure Jackie and so worth watching. Here’s that clip.

Jackie’s character Chon Wang is part of the imperial guard sent to retrieve the princess Pei Pei (Lucy Liu) who has been kidnapped. He gets separated from the other guards and he ends up getting married to a Native American girl, teaming up with an outlaw and feels that he has disgraced his post and will not restores his honor until he saves the princess. A princess that he is in love with.

In Shanghai Knights Jackie and Owen team up once again but this time they go to London to restore Chon’s family honor after his father is murdered and the imperial seal that he was guarding is stolen. Chon must find O’Bannon and get to London where Chon’s sister Lin (Fann Wong) has traveled to get revenge on the man who murdered their father. The action is non stop, the humor is both physical and joke driven. So much comes from Jackie’s reactions to the world around him as well as his reactions while fighting.

Here’s a clip from Shanghai Knights

The disc is loaded with tons of extras including the trailers for each movie and also the music video for “Yeah, Yeah, Yeah” by Uncle Kracker featuring Kid Rock as well as Jackie Chan and Owen Wilson. There are also multiple commentary tracks including the track on shanghai Noon with Jackie and Owen.

Certainly a Must have for and Jackie Chan fan.

Here is the official press release

Chinese Imperial Guard Chon Wang is in for a real kick when he travels to the rough and tumble Old West to rescue the beautiful kidnapped princess Pei Pei (Lucy Liu). Teamed with laid-back cowboy outlaw Roy O’Bannon, the two mismatched partners face jail, brawls and the vilest villains this side of the Great Wall. Then jump in the saddle for the wild and wooly sequel as the two unlikely heroes make their way to London on a daring quest for honor and revenge. These two uproarious comic adventures are even better on Blu-ray!