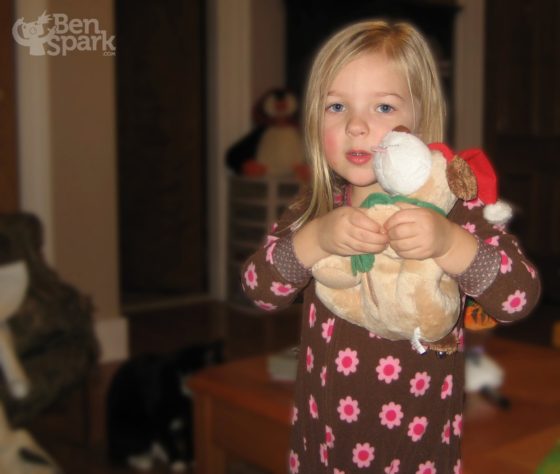 Eva was in rare form and hilarious today. She fell into the toilet doing the potty all by herself. Later she had a cup of water and let it spill on the floor then got a roll of toilet paper from the bathroom and put pieces down all over the place to “clean it up”. A few of them even covered over the water.

She also really loves this doggy. Although the batteries are dying and the song sounds all messed up, she still loves it. When the dog comes out for Christmas she plays with it all over the house.

I’ve been helping my Dad on the annual Christmas letter. The great thing about doing this every year is that I can always count on some piece of technology going kaflooey. I’ve gotten the formatting down and the paper that we got doesn’t seem to be recognized by the printer as printable. I have never seen that before. I swear that the universe just comes up with weird stuff to annoy me. But the letter got written on Google Docs, edited on Google Docs and then I pasted it into Photoshop Elements with the photos. It looks pretty good and formatting didn’t take forever. I’m still using Adobe Photoshop Elements 7.0 but just got Adobe Photoshop Elements 9.0 and need to load that up into the computer.

Tonight I had some cool stuff happen. I got invited to the North American International Auto Show. It happens to be the same time as Affiliate Summit West 2011. I’m part of a great panel at Affiliate Summit West 2011 called Affiliate Improv and that will go on Sunday, January 9, 2011 from 11-12. So I could technically go to Vegas do the session and fly to Detroit for the Auto Show. I’ve never been asked to go to a big press event like this before and although I can’t do anything to get back the money I spent on my flights and hotels for Vegas it would still be worth it for the additional contacts I could make at the Auto Show.

If the time conflicted so much that I couldn’t make it to my session at ASW11 I wouldn’t even consider going but it looks like I can do both so I’m thinking of going for it. I’ll be part of the press and there as a blogger for GM. This is huge and I’m pretty psyched! How could I pass up being there as part of the preview of the show. Getting the inside scoop on the hottest new cars. So cool!