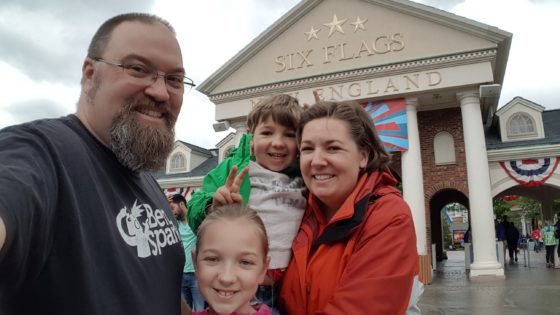 Today’s adventure was sponsored by Kia. We were provided compensation and tickets to attend the Kia Ride and Drive Experience at Six Flags New England. Opinions and experiences are 100% our own.

After having worked all weekend overnight I came home and we immediately set off for Agawam, MA to Six Flags New England. I have not been there since I was right out of college. The place was called Riverside at the time and it was so different. The Six Flags park is really nice but I will get to that later. First I had better get myself into a Kia and take a test drive. Upon arrival that was the first thing that we did. The family hung out at the Kia lounge area and I went out for a ride in a Kia Soul. I’ll tell you more about that below, after the video that I made of our day.

I chose the Soul because it is a fun looking vehicle. The one that I got to drive was dark grey with red and black accents and it looked sharp. The seats were very comfortable and inside there are funky features like tons of speakers that have special lighting that can plse to the music or the mood. There was also an in dash infotainment unit that had navigation, satellite radio and more. There were safety features like lane departure and blind spot warning. There are a ton of other features to this vehicle which you can check out on the Kia website. 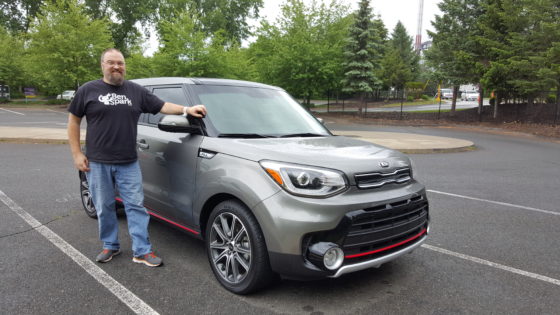 Once my ride was finished I was presented with some Bugs Bunny dollars to use in the park and also some passes to get through the ride lines faster. We went into the park so that Allison and the kids could start having fun on the rides. I went back to the Kia Lounge to test drive another vehicle. 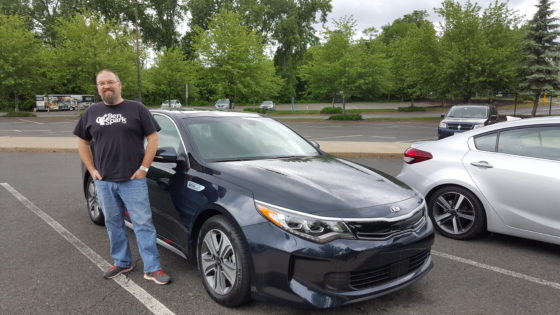 the second Vehicle that I test drove was the Kia Optima Hybrid. This was a smooth riding, very quiet car. It has a ton of great tech inside. The way that the vehicle recovers battery power while braking and how it switches to electric at certain speeds and also how the air flow system changes to get more airflow but reduce cabin noise. It is way more than I fully understand but I can explore the Kia site to learn more about all the great features of the vehicle. I know that I really liked driving it and the cabin felt very comfortable. 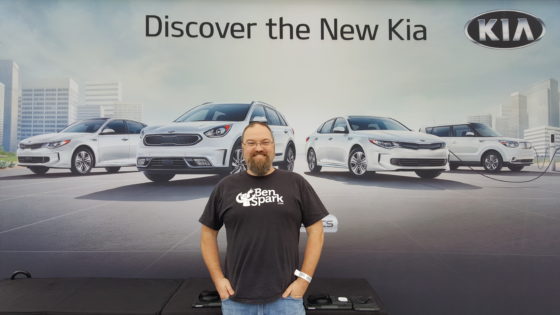 I returned to the Kia Lounge and took some video and photos of the vehicles before heading into the park myself.

I caught up with the family in the Looney Toons MovieTown. The kids had already gone on a bunch of rides but were eager to do them all again with me. The weather was grey and dreary and it did rain bt it did not diminish the fun and excitement that we had while at the park. We went on a mini roller coaster, a jeep ride, a movie tour bus ride and then I took the kids onto the Scrambler. That was the most exciting ride that we did. The kids aren’t quite old enough or tall enough for all the crazy fun roller coasters that they have at the park. Andrew wasn’t tall enough for bumper cars either. I would have liked to have done that but Eva, out of kindness and thoughtfulness to her brother opted not to go on that ride. The kids were really good together on this trip. They were so well behaved.

I think that the best part of the day was meeting the characters in the park. We got a family photo with Bugs Bunny and Daffy Duck and also Porky Pig. Then there were some DC Super Heroes around the park including Robin, Batman and The Flash. The Joker was also around because of the new Joker 4D Roller Coaster. We found Robin first and I have to tell you, I was so impressed with how well Robin interacted with each kid. He didn’t overplay the character but rather got a great conversation going with each of the kids. He met Andrew first and asked him who his favorite Super Hero was. Andrew said Superman, but would quickly change his tune later. 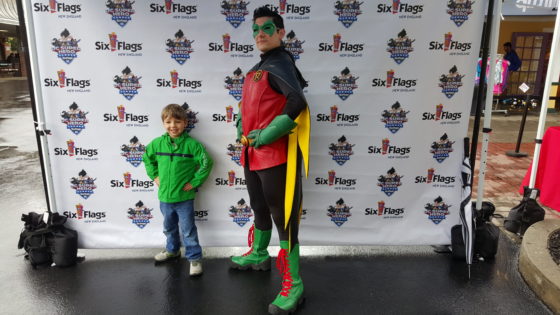 Robin had Andrew give his best Superman pose for the photo.

The Robin met Eva and they talked about Wonder Woman. He had her give a good pose as well. I loved that the crowds were not huge because that meant that the characters could really give time to the kids and the kids enjoyed that immensely. 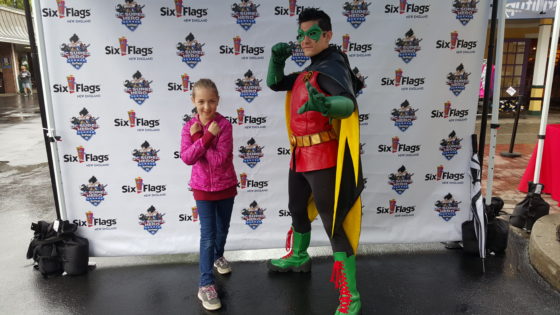 Robin told us that Batman and The Flash were at the Hall of Justice and so we made our way there. Along the way we saw that the gift shop had capes for $6 or 2 for $10. I put that bit of info into the back of my mind for later. 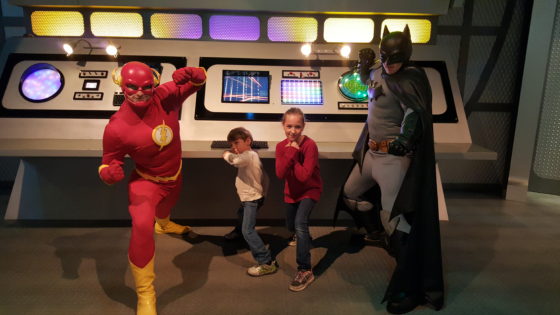 In the Hall of Justice we learned that Andrew’s actual favorite Super Hero is The Flash. He and Eva asked Batman and The Flash a bunch of questions. The kids also asked me a bunch more questions on the ride home, like origins of the characters and more. The Flash and Batman gave the kids a personal tour of the Hall of Justice. We even had a family photo with the two heroes. 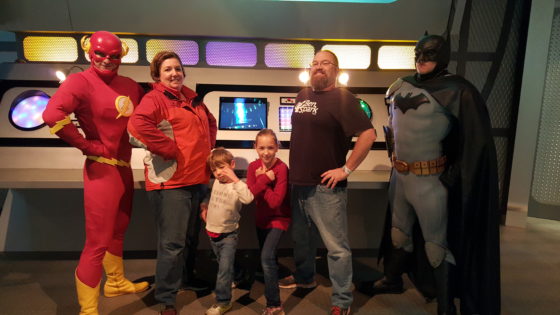 Again, I was impressed with how the chracters interacted with the kids. You can see in the video above how much fun they had.

As we exited through the gift shop the kids wanted to get some superhero things. Andrew was taken with a Flash cube character and wanted a big one but we settled on a smaller on and also a Flash cape. Eva went with a cube Batman and a Batman cape. Both capes had a steampunk look to them and the kids immediately wanted to wear them. They also wanted to go right back into the Hall of Justice to show Batman and The Flash what they got. 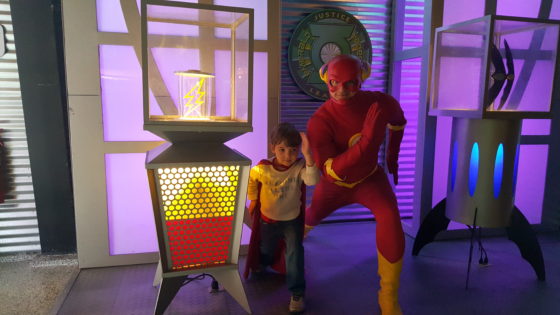 The kid were very excited about their new capes and they even got them signed by Batman and The Flash. 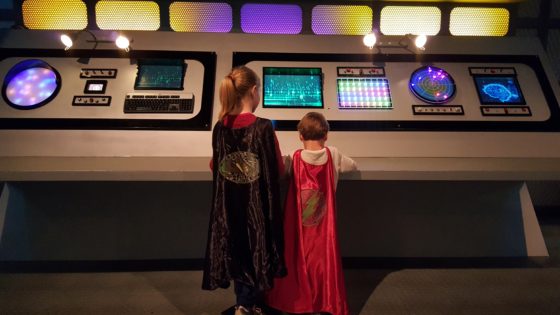 After that they ran around the park pretending to be Super Heroes. 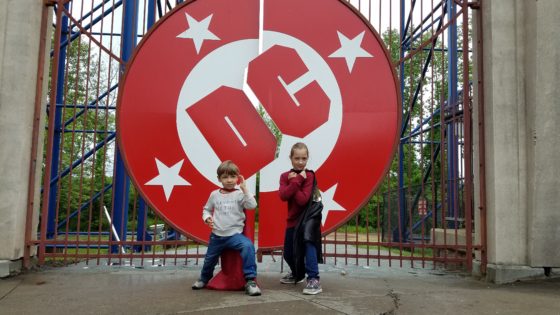 We also ran into Scooby Doo and Scrappy Doo. 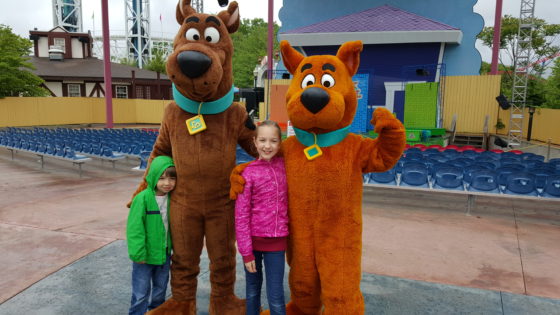 Then we went back to the Movie Town so the kids could do all the rides one more time. They ended with their favorite ride which was Taz’s Delivery ride. 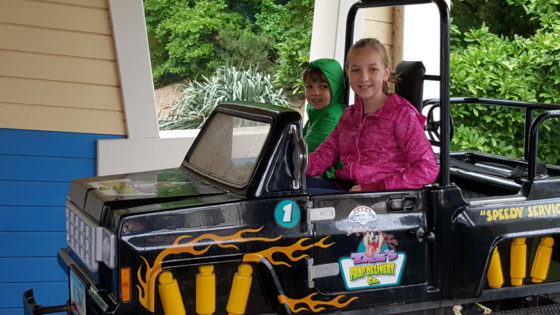 We went home after that. Eva had created a survey for everyone to answer. One question before we went to the park and then seven for when we left the park. I think that she is going to be in charge of our reviews in the future. She had a knack for it.