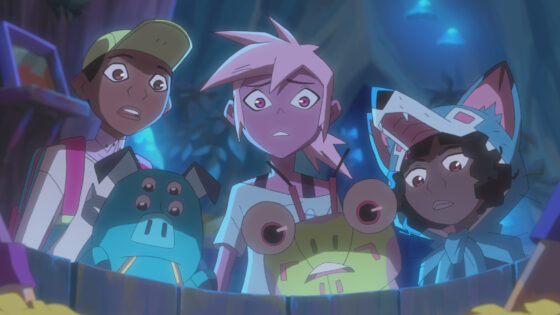 The kids and I loved watching Kipo and the Age of Wonderbeasts season 1 when it launched on Netflix. It was so different and fun. We enjoyed all of the interesting characters, the mystery and the overall story. By the end of the season we could not wait for more episodes. But we had to wait. Luckily, the wait is nearly over.

First we were met with this teaser back in April

And then a new poster 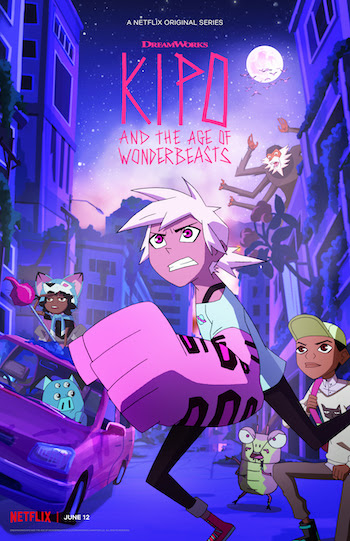 And then more recently a full trailer for season 2 launched.

I am so excited to learn more about Kipo’s powers and how she is a mute (mutant). It seems like her father knew but as we know from the end of season 1 , he’s been captured and is being mind-controlled by Scarlamagne. So what will happen this season? A full description is below but so many mysteries yet to learn.

DreamWorks Kipo and The Age of Wonderbeasts will return to Netflix June 12, for a second season filled with adventures through the whimsical, weird post-apocalyptic world of Las Vistas. To announce the highly-anticipated second season, DreamWorks has released a teaser and poster that can be found below.

After spending her entire life living in an underground burrow, a young girl named Kipo (Karen Fukuhara) is thrust into an adventure on the surface of a fantastical post-apocalyptic Earth. She joins a ragtag group of survivors as they embark on a journey through a vibrant wonderland where everything trying to kill them is downright adorable.

Following the season one finale, all is not well on the surface. With the burrow people under Scarlemagne’s mind control and her father his prisoner, Kipo must quickly learn to master her newly-discovered mute abilities in order to save them. As she and her friends split up on a dangerous rescue mission, Kipo’s journey of self discovery unearths mysteries of the past that change everything she thought she knew.

The cast features Karen Fukuhara (She-Ra and the Princesses of Power) as the enthusiastic and curious “Kipo;” Sydney Mikayla (General Hospital) as “Wolf,” a weapon-wielding survivor who knows the ins and outs of the surface; Coy Stewart (The Blacklist) as the happy-go-lucky “Benson;” Deon Cole (black-ish) as “Dave,” a talking insect who has the jarring ability to suddenly age a full life cycle without warning; and Dee Bradley Baker (Star Wars: The Clone Wars) as the adorable mutant pig “Mandu”. Sterling K. Brown (Frozen 2) returns as Kipo’s father “Lio Oak;” Dan Stevens (Legion) as the power-hungry “Scarlemagne;” Jake Green (The Boss Baby: Back in Business) as mod frog “Jamack;” and Lea DeLaria (Orange is the New Black) as Timbercat “Molly Yarnchopper.” Amy Landecker (Transparent) joins as the mysterious “Dr. Emilia.”

All 10 half-hour episodes of the second season of DreamWorks Kipo and the Age of Wonderbeasts premiere on Netflix worldwide on June 12, 2020.

ABOUT DREAMWORKS ANIMATION:
DreamWorks Animation is one of the world’s leading producers of high-quality, animated family programming, reaching consumers in more than 190 countries. Creating a diverse array of original content in a variety of formats and delivering deep, fully immersive worlds served up with compelling characters, the prolific studio has garnered 25 Emmy® Awards since inception in 2013 and is home to such beloved series as Trollhunters, Spirit Riding Free, She-Ra and the Princesses of Power, Trolls: The Beat Goes On!, The Boss Baby: Back in Business, Kung Fu Panda: The Paws of Destiny, The Epic Tales of Captain Underpants, Dragons: Race to the Edge, All Hail King Julien, 3Below and the recently released Archibald’s Next Big Thing. DreamWorks is a division of the Universal Filmed Entertainment Group within NBCUniversal, a subsidiary of Comcast Corporation.