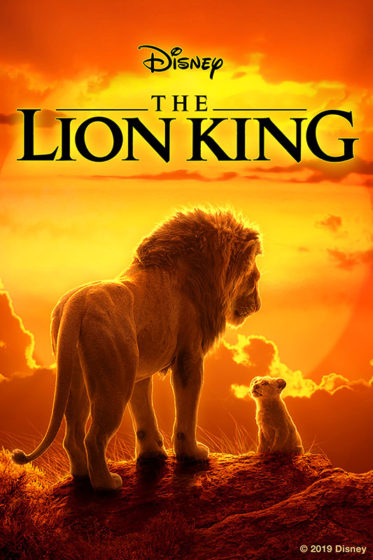 I was provided a digital copy of Disney’s The Lion King (The Live Action One) for free to give away. They also gave me one to use so I could watch the movie myself and give you my thoughts. Opinions are my own.

The Lion King is one of my all time favorite animated movies. I was interested to see the take on the movie in a live action format. With lifelike lions and animals and an almost entirely new cast. Some folks are reprising their roles and we have some new people in iconic roles. Namely Timon and Pumba. Those guys were the funniest characters and Nathan Lane is amazing. Billy Eichner does his level best to bring that role to life as his own and I think he did an amazing job. The movie is visually beautiful and the photrealistic animals are spectacular. I enjoyed the movie very much and am happy to be able to give a copy to you. Please enter below through the Rafflecopter app.

Use the Rafflecopter widget below and make sure that you leave a comment on the bottom of this post in order to qualify for the giveaway.

a Rafflecopter giveaway
More about the movie below.

The Global Phenomenon Comes to Life Like Never Before Disney’s “The Lion King” Releases on Digital 4K Ultra HD™ and Movies Anywhere Oct. 11 and on 4K Ultra HD and Blu-ray™ Oct. 22

BURBANK, Calif. (Sept. 16, 2019) — Be prepared: Disney’s “The Lion King,” the worldwide phenomenon that brought the Pride Lands’ iconic characters to life in a whole new way, arrives on Digital in HD and 4K Ultra HD™ and Movies Anywhere Oct.11 and physically on 4K Ultra HD, Blu-ray™ and DVD Oct. 22. Directed by Jon Favreau, the summer blockbuster, which reigned supreme with audiences worldwide — earning over $1 billion at the global box office and an A CinemaScore — journeys home with all-new bonus features, music videos and an exclusive extra for Digital consumers.

In-home audiences will feel the love as they trek behind the scenes and to the African savanna through “The Journey to ‘The Lion King,’” a three-part documentary that explores the film’s creation. It features visits to the Playa Vista production facility where talent, including Donald Glover (voice of Simba) honor and elevate the animated classic’s iconic music; discussions with Favreau and team who used cutting-edge technology to create photorealistic animals and environments; and filmmaker and cast reflections on the timeless tale that has moved generations.

Extras also include “More to Be Scene,” layer-by-layer progressions of some of the film’s most iconic moments; lyric video for “Never Too Late” by Elton John and music video for “Spirit” by Beyoncé; sing-alongs to the film’s unforgettable songs; and a feature on the “Protect the Pride” campaign, which focuses on protecting and revitalizing the lion population.

Consumers who pre-purchase digitally, “The Lion King” will gain access to “Perfecting the Pride,” a feature highlighting the filmmakers’ research trip to Africa.

The digital version includes an extra that playfully conveys the importance of the dung beetle both in the film and the African savanna.

In “The Lion King,” pioneering filmmaking techniques bring treasured characters to life in a whole new way. Simba idolizes his father, King Mufasa, and takes to heart his own royal destiny. But not everyone in the kingdom celebrates the new cub’s arrival. Scar, Mufasa’s brother — and former heir to the throne — has plans of his own. The battle for Pride Rock is ravaged with betrayal, tragedy and drama, ultimately resulting in Simba’s exile. With help from a curious pair of newfound friends, Simba will have to figure out how to grow up and take back what is rightfully his. The all-star cast includes Donald Glover as Simba, Beyoncé Knowles-Carter as Nala, James Earl Jones as Mufasa, Chiwetel Ejiofor as Scar, Seth Rogen as Pumbaa and Billy Eichner as Timon.

“The Lion King” will be packaged and released in several different formats, ensuring each member of your family can view the film on a variety of different devices with no worries. Viewers can watch the film in Digital 4K Ultra HD, HD and SD, and bring home a physical copy of the film which will be released as an Ultimate Collector’s Edition (4K Ultra HD, Blu-ray and Digital Code), a Multi-Screen Edition (Blu-ray, DVD and Digital Code) and a single DVD.

“The Lion King” is directed by Jon Favreau (“The Jungle Book,” Marvel Studios’ “Iron Man”) and produced by Jon Favreau, Jeffrey Silver (“Beauty and the Beast,” “Edge of Tomorrow”) and Karen Gilchrist (“The Jungle Book,” “Chef”). Jeff Nathanson (“Catch Me If You Can,” “Pirates of the Caribbean: Dead Men Tell No Tales”) penned the screenplay based on the 1994 screenplay by Irene Mecchi, Jonathan Roberts and Linda Woolverton. Tom Peitzman (co-producer “Kong: Skull Island,” “Alice in Wonderland”), Julie Taymor (director “A Midsummer Night’s Dream,” Broadway’s “The Lion King”) and Thomas Schumacher (“The Lion King,” “Beauty and the Beast”) are executive producers, and John Bartnicki (“The Jungle Book,” “Chef”) is co-producer. The award-winning team of artists tapped to bring the African savanna and its animal inhabitants to life includes visual effects supervisor Robert Legato, who conceived the virtual production on “Avatar,” won Academy Awards for his work on “The Jungle Book,” “Hugo” and “Titanic,” and was nominated for an Oscar for his work on “Apollo 13,” and Oscar-winning animation supervisor Andrew R. Jones (“The Jungle Book,” “Avatar,” “World War Z”). MPC Film’s VFX supervisors are Adam Valdez (“The Lord of the Rings: The Fellowship of the Ring,” “The Lord of the Rings: The Two Towers”), who won an Oscar for his work on “The Jungle Book,” and Elliot Newman (“The Jungle Book,” “Fast & Furious: Supercharged”). MPC Film was instrumental in bringing each character to life and building the movie’s full CG environments, as well as working with filmmakers to develop the virtual production technology.

ABOUT THE WALT DISNEY STUDIOS:
For over 90 years, The Walt Disney Studios has been the foundation on which The Walt Disney Company was built. Today, the Studio brings quality movies, music and stage plays to consumers throughout the world. Feature films are released under the following banners: Disney, including Walt Disney Animation Studios and Pixar Animation Studios; Disneynature; Marvel Studios; and Lucasfilm. The Disney Music Group encompasses the Walt Disney Records and Hollywood Records labels, as well as Disney Music Publishing. The Disney Theatrical Group produces and licenses live events, including Disney on Broadway, Disney On Ice and Disney Live!