I’ve been waiting for this day for a long, long time. You see, I meat Rob Merlino, aka, The Hot Dog Man, back in 2008. I learned that he was on a quest for National Hot Dog Month. That quest was to eat a hot dog a day for the month of July at a different venue each day. He’s gone 29 days with no repeats and even then can’t get to all of the joints around, there are so many great places. I asked Rob if I could go with him to one place, but which one… Oh yeah and Rob wanted me to get him a Camaro for his birthday.

We discussed maybe going to Tex Barry’s, which is now up the street from us at our new home. We discussed going to New York system in Rhode Island because it is iconic but instead Rob introduced me to something very special and totally new to me, Larry Joe’s New England Firepit.

I pulled up to the parking lot of Larry’s Liquor Store in BumbleBee and waited for Rob. He showed up a few minutes later in his convertible with his daughter (and reluctant camera operator) in tow. He was ecstatic about the car and immediately wanted to get in and drive. What can you say, I came through and got him a Camaro Convertible for his birthday. We drove up the street a ways and then Rob took us on the highway to Open ‘er up a bit. Let’s just say the car can fly. 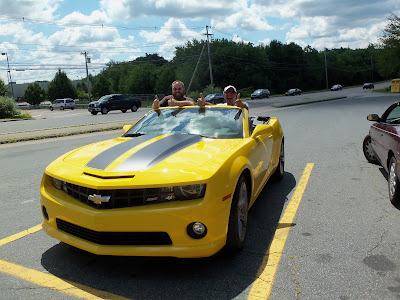 We got back to the parking lot and shot some video and photos before Larry Joe showed up. We walked inside the liquor store to find that they also sold hot dogs. Rob chatted with a guy there and they started talking about a place in Natick called Casey’s. I find that whenever you go to a good hot dog place you meet people who have been to many others and you start talking about your favorite places. Hot Dog joints tend to bring people together and break down barriers. Hot dogs are unpretentious food and attract unpretentious people.

We went back outside and that is when the real experience began. Larry Joe pulled up in his van and trailer. Larry cooks his dogs on a hickory smoker grill that is also propane powered and can pump out 20,000 BTUs. The dogs get smoked and basted and brined and all sorts of goodness happens to the dogs. Larry also has 7 different condiments, all of them he makes himself. You can get a Big Dog with everything and it is pretty damn delicious.

Larry Joe did not stop talking for one solid hour. He got out of the car talking and told us stories and jokes and history as he set up the truck for the day. He talked to everyone who came to get a dog and joked with them and taught them a thing or two. Larry Joe was one of the best story tellers that I’ve ever heard and I was hanging on every word.

Customers lined up to get their hands on the 1/2lb Pearl Hot Dogs. These are monster sized dogs and if you can eat two you’re gonna be full for the next couple of meals, they are that big. There were a few people, veterans who came up and bought the Fire Dog. This is a very hot dog that you cannot order on your first trip. Larry Joe will not allow you to have it on your first time out. It was fun watching him engage new customers who wanted to order one.

Engaging customers, putting people at ease, giving them a show and a unique dining experience, that was the magic of Larry Joe’s. Larry Joe even has a keyboard in his truck and he will sing for the crowd. Hot Dog Man got in the truck with Larry Joe and debuted the Hot Dog Man song.

Finally it was my turn to get a dog. I watched patron after patron get amazing dogs and I finally got a chance. I ordered mine with Mustard, Chili, Spicy Pepper Relish, and Onions. It was so delicious. Fresh bread, a fresh dog and great fresh condiments. It was a taste experience like no other. I appreciate that Rob took me along for this Hot Dog adventure and also appreciative to Larry Joe for such a great experience. 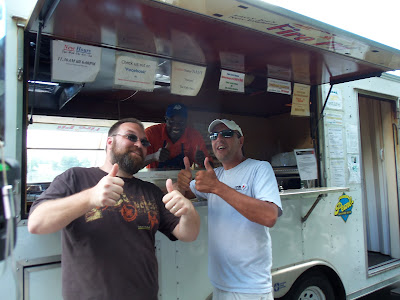 I took a bunch of video but haven’t had a chance to process it. A lot of work on the house. But Rob made a great video of our experience and I’m even in it quite a bit.

You can see all of rob’s videos on his Hot Dog Man YouTube channel. And You can read about his exploits on The Hot Dog Truck.