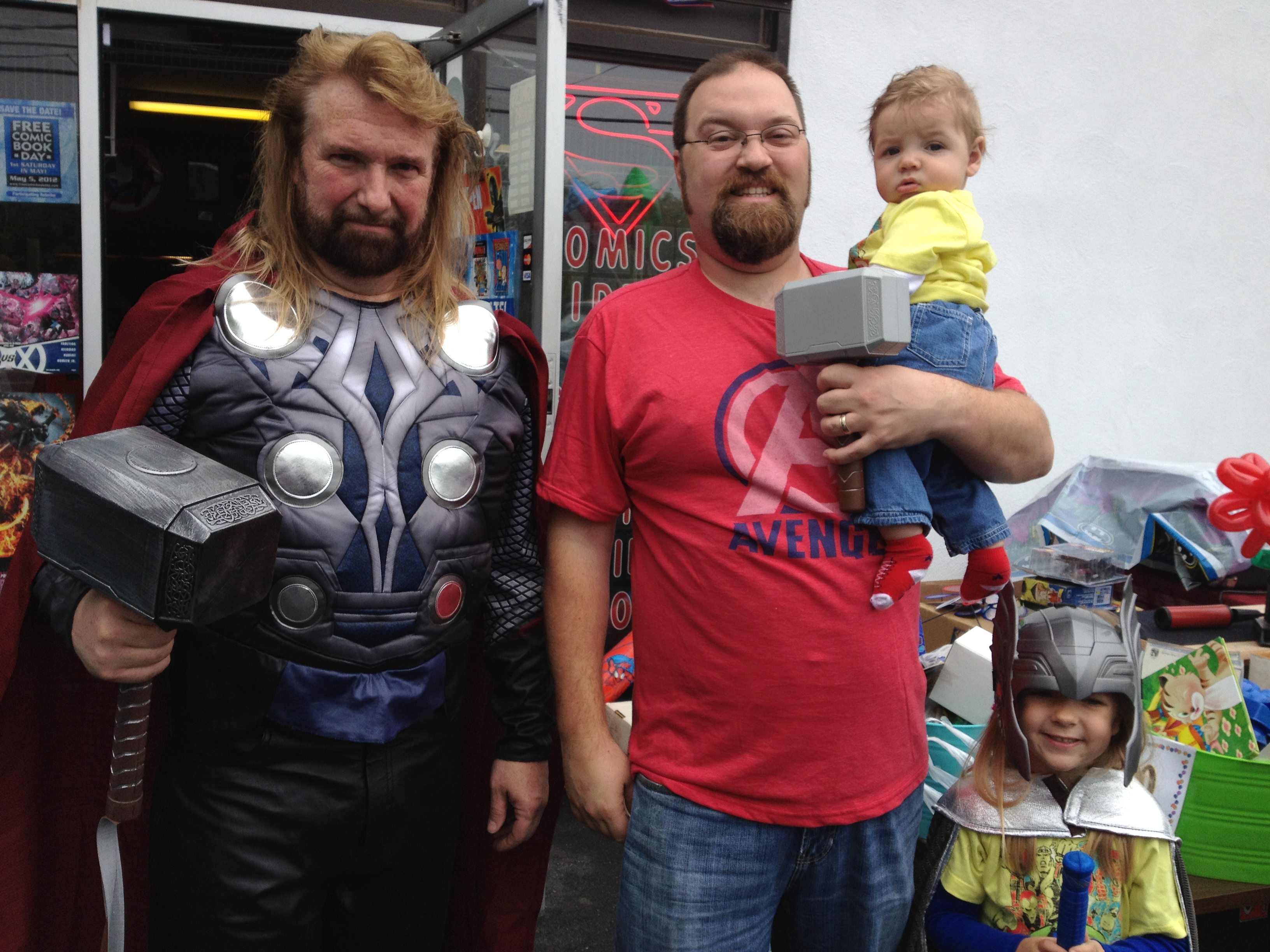 Today was Free Comic Book Day. It is an annual event that I look forward to celebrating with the kids. The first one I every took Eva to was Free Comic Book Day 2010 and then I missed last year but made sure that we went this year even if sleep was shuffled around a bit. Totally worth it. Free Comic Book Day is getting bigger and bigger each year too. In 2010 the traffic was pretty light but today it was super busy at Wild Time Comics. There were a ton of people there getting the free comics. 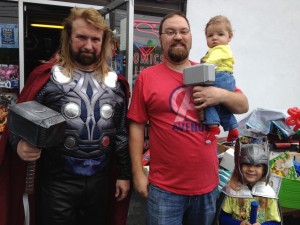 Leading up to Free Comic Book Day I went and got some retro style Avengers T-shirts for the kids and also got one for myself. The kids’ shirts are matching ones with Thor, Iron Man, Captain America, Hulk and Spider-Man on them. Mine has the Avenger’s Logo. Eva also had her Torunn helmet, cape and sword. I picked up a small Thor’s hammer for Andrew. He would hold it for a bit and then drop it. Carry him, the comics and the hammer was a juggling act. The only free comic book that I was really excited to get was the Transformers Regeneration One met the fate of Andrew’s powerful grip and rip action. Not a huge deal, a small rip but it was the only one he got his hands close enough to grab. But he sure is cute. 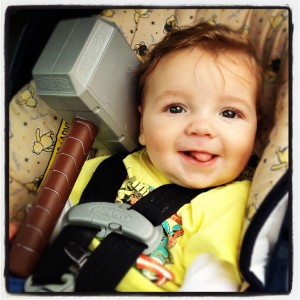 We got to the comic shop and there were a ton of people there already. We only had 20 minutes to spend because Eva had dance class so we went in and selected a bunch of books. I didn’t look too closely at a few and grabbed some from past years but Eva will enjoy reading them. She was all about The Avengers as well as some cartoon stuff. She now likes to watch Young Justice with me, too. She did not want to pick up the Smurfs though, she did pick up Yo Gabba Gabba and she’s never seen that show before. It is up to her. She also picked up an older Barbie comic for me to buy. We took a bunch of photos and got a bunch of goodies including a bag with temporary tattoos, a mask and more. Eva even got a cookie and a balloon animal. She took a Photo with Batman and Wonder Woman as she has in the past. 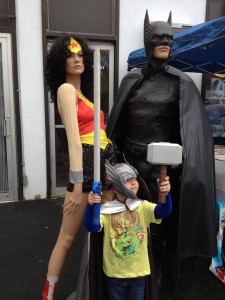 I like how she is not looking at me but with a heroic stance off into the distance.

Eva had fun and all the way to dance she asked me if Randy had a Thor helmet, where was the helmet and why Spider-Man is called Spidey. I love that she is so excited about these things that I enjoy. Andrew had fun too. He was all smiles as he played with the Thor Hammer. 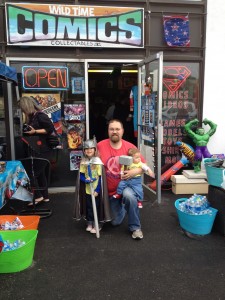 I wish we had had a little more time to explore all the great deals. Also, I won a variant cover for Avengers versus X-Men from the AvX party last month. Sweet! Randy and his team at Wild Time Comics were great, they really did a nice job this year for Free Comic Book Day. We can’t wait for next year!