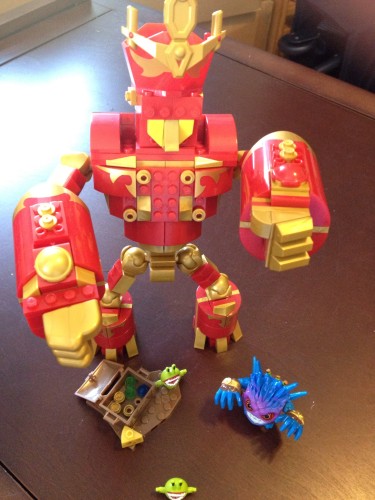 We received the MEGA Bloks Skylanders Giants Arkeyan Robot King with Pop Fizz to play with and review. Opinions are 100% our own.

Pop Fizz was one of those characters that I was very excited to play when I learned about him prior to the release of Skylanders Giants. He’s bright blue, a little crazy and can completely morph into another mode. He’s also voiced by Bobcat Goldthwait, an actor I enjoyed very much in the 80’s. So, Pop Fizz has the voice, the skills and can let loose in a beast mode. He’s just the sort of character needed to take on the Arkeyan Robot King.

The set is a very nice one with a ton of bloks, nearly 300 of them. You probably noticed that the build video took over 10 minutes and that was with me speeding up huge chunks of assembly time. I hope you didn’t get too bored with the music. I’m new to Garage Band. 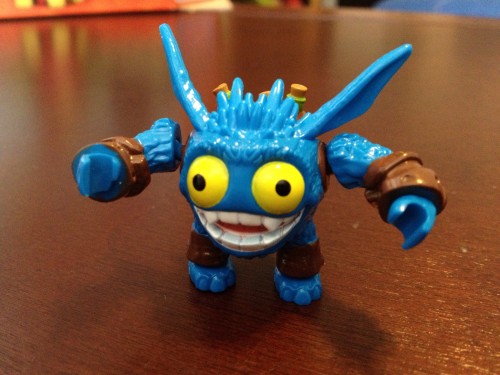 The Pop Fizz figure has terrific detail. From the giant yellow eyes to the removable backpack full of potions and elixirs. Pop Fizz even comes with a green beaker full of elixir. I somehow knocked that onto the floor and couldn’t find it for the photo shoot or the video. Eva found it two days later. She has eagle eyes. 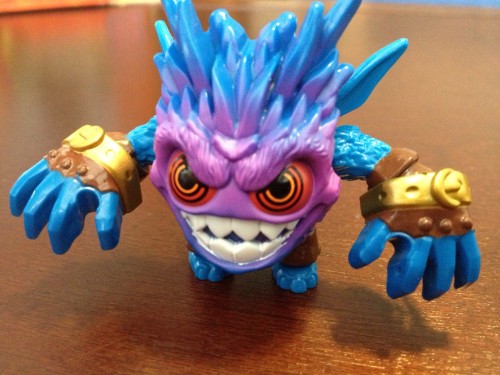 The Beast Mode for Pop Fizz was done very well. A flexible plastic overlay goes on top of Pop Fizz and transforms him into the very powerful beast. The backpack still fits on him even with the additional accessory. You also snap on some powerful claws to complete the beast mode look. It is a very accurate portrayal of this character.

Pop Fizz is very short so only his feet move and not his legs, he stands like a furry golf ball on to sticks. Hi arms move and his hands move as well but everything else is pretty well staying int he same place. This works for a character with this shape and size. 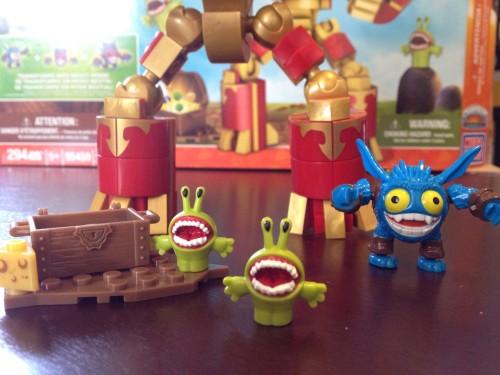 Speaking of size, the Arkeyan Robot King is huge. Pop Fizz only comes to this guy’s ankle. The Robot King looks very good. It moves like a clanky old robot like the counterpart in the video game. In the game you occasionally get to ride in these massive hulking bots as you lumber along through challenges. You definitely get the sense of a lumbering hulk from this figure. 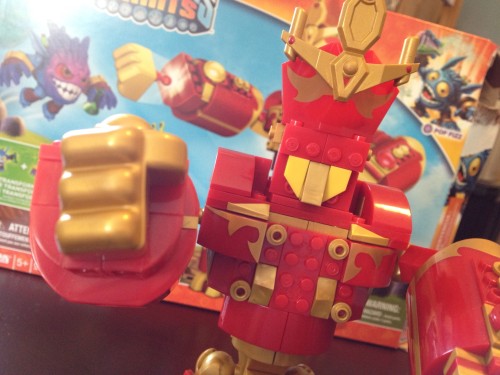 There is excellent detail in the Robot King which is achieved primarily through standard bloks. there are some specialty bloks but for the most part the detail is built from non specialized bloks. The arms and legs are on ball and socket joints so the Robot can be posed various ways. There is a a fist that can be shot from the robots arm. This, I’m assuming, is the Fist of Argus which is the source of Kaos’ power in this episode of the game. Also, the head is like a big platform for the figures so that they can ride the robot similar to what they can do in the game, however they are not firing projectiles from the top of the Robot’s head this time around.

the set is a very good one and a welcome addition to my existing MEGA Bloks Skylanders Giants Sets.