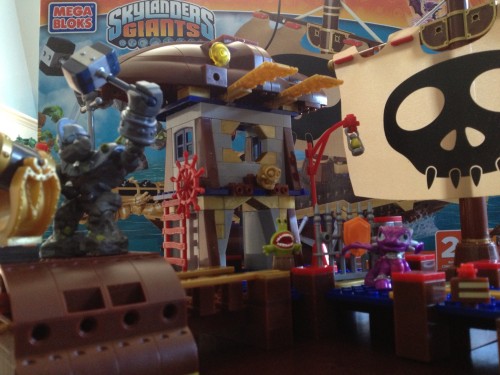 I received two sets of the MEGA Bloks Skylanders Giants Crusher’s Pirate Quest because it is a 2 in 1 build type of set and my contact at MEGA Bloks wanted me to be able to build both versions of this set at the same time. We received both sets in order to try them out and review them, as always opinions expressed are 100% our own. About a week ago I posted part one of this review which was building out the Pirate Ship and Pirate hideout. In that review and video I took you up close and personal with the figures included and you can check out that review in order to refresh your memory MEGA Bloks Skylanders Giants: Crusher’s Pirate Quest Part 1: Ship Build.

This time around we build what I have dubbed, “Shipwreck Shores” because it looks like the structure was built from a wrecked ship. Which makes sense because the parts are the same ones used for the pirate ship build and so this structure is something that someone might build to shelter themselves if they were shipwrecked. Eva and I made another video all about this second build and she gets to continue her story.

One of the things that I’m so proud of her for is that she came up with the concept of Crusher and Cynder being minions of Kaos in this build. This easily explains why we have two Crushers and two Cynders. This helped her craft the story that we tell in the video. We worked together on getting the story set up, we may have tread back over the previous story a bit but I think we had fun with the next installment. 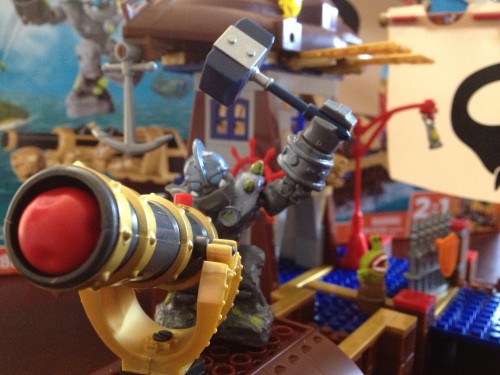 The build itself was something that I enjoyed because I loved seeing how the pieces were used differently than they had in building the pirate ship and hideout. I enjoyed the fun little touches like putting T-Bone’s head above the door on the main structure. Also, using half of the ship as the roof and half as part of the dock/cannon station was well done. I like the aspect of this being a dock with a structure on it. 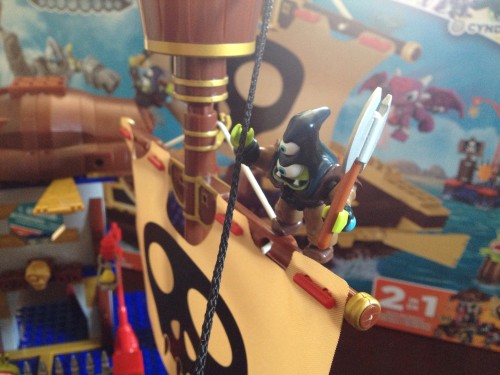 The play-ability factor is certainly enhanced by making this set a 2 in 1 build. This gives kids more options when it comes to creating stories like the one that Eva came up with. It would be fun to see the Skylanders crash land on an island (in the video game) and have to build a structure to shield themselves from the elements and from the bad guys. Of course this is probably something I enjoy because I love games that give you tons of little missions to complete an overall quest. How much fun would it be to have a side quest for Crusher where he dreams of being a pirate.

Disclosure: As I stated in the beginning paragraph we were sent this product to try out and review, we were actually sent two of them. Opinions stated in this review are 100% my own.