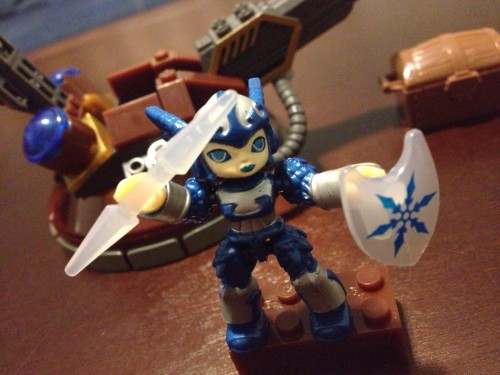 Now with the Battle Portal reviews completed I am working on reviewing all the playsets that I have from MEGA Bloks. The latest one is the Sky Turret Defense with Chill. I received this from MEGA Bloks to try out and review. Here is what I thought of it.

The Sky Turret Defense looks like it came right out of the Skylanders Giants game. There is a Heroic Challenge where the player has to jump into four or five different turrets and shoot down toxic barrels. At first I thought this was an impossible level but once I figured out the timing I was all over it. This playset recreates that turret defense system perfectly. I love the detail of the hoses and the canisters on the back of the turret as well as the opening and closing hatch. In the game the hatch pops open so that the player can jump into the turret and shoot down various targets.

The Chill figure is decent. She has a movable head, arms and hands as well as legs and ankles. I would have liked to have seen her knees and elbows bend like other figures so that she was more poseable but it works so I can’t complain too much. The instructions show her standing on the 2X4 blok and her legs are on the two outer pegs. I tried that and it just wasn’t happening, her legs would not stretch that far. So I had her positioned on the 1 and 3 peg of that blok. The 2X4 blok is where the figure stands and can easily slip into the opening of the turret. If the figure is not standing on the blok then they are too deep into the turret.

The Chill figure does look good though and her weapons, the ice javelin and ice shield are spot on. I was impressed when I took this figure out of the package. 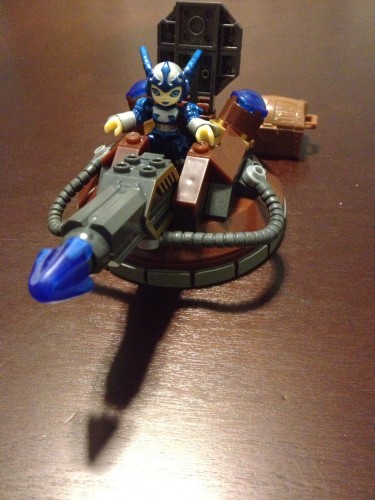 The set has 74 pieces and there are some unique and useful pieces in the set. The turret base is all one piece and that is okay but I would have liked to have built that from other pieces. The pieces that make up the two canisters on the back of the turret are cool because they take triangle bloks and assemble them so that the canisters are out on angles rather than just sitting there straight up and down. Just by changing the angle of the bloks makes it more interesting and dynamic. I certainly learned soem interesting assembly techniques while building this set. 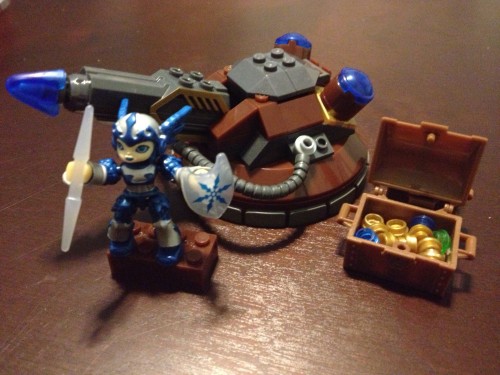 I am going to have a huge glut of treasure chests though because so many sets come with treasure chests and treasure. I did notice that the chest only has one lock instead of the three that the chests in the game have, small detail but I noticed it. There weren’t any baddies in this set and I would have liked to have seen that but the one thing that I thought definitely should have been in the set was the elemental symbol of water for Chill. I guess I got used to getting an elemental symbol for each figure in the battle portal sets. It is a single piece and should be included.

The missile in the turret shoots pretty far. It also pivots up and down for more precise aim. It works great when you are having battles against the bad guys. I can’t wait to set this up against Kaos’ castle.

Disclosure: As I stated in the beginning I received this MEGA Bloks Skylanders Giants Sky Turret Defense set to try out and review. Opinions are 100% my own.