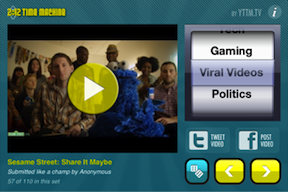 I’ve always thought of Shout Factory as the people who put out great DVDs of things that I really enjoy like Transformers. They also do apps. The latest one is called 2012 Time Machine. The app is a curated list of over 1,000 YouTube videos that show many popular culture stories from 2012. Going through the app took me back to some of the funnier viral videos, music from the year and movie trailers. There are also sports, news and political moments. If you missed out on the biggest stories of the past year then this app is a fun one to pour through.

I would have liked to be able to search the app for things that I liked. Also the ability to suggest additional videos for curation would be great. I do like the ability to tweet or share videos on Facebook being built in to the app. Being able to mark or star videos that you could pull up quickly to show friends would also be a good thing to add to the app.

I was pleasantly surprised to see some videos from Devin Supertramp and Lindsey Stirling in the app. The app is $0.99 and has hours of great content to check out. Here is some more information on the app and the trailer for it as well.

From the developers of the popular Video Time Machine, 2012 Time Machine is a special year-in-review edition app that enables users to look back at more than 1,000 curated moments that defined the year, from the hottest music, movies, TV shows and games, to the most talked about news events, sports moments and scandals. By popular user demand, the app also contains a viral video category to capture the best and most watched user generated content of 2012.

The clean, easy to use interface of 2012 Time Machine allows users to seamlessly navigate the year’s video content by category and share to their social networks.

“As individuals and the media reflect on the seminal moments that defined the past year, we are pleased to give users a fun way to relive their favorite memories in one application,” said Garson Foos, Shout! Factory’s president. “2012 Time Machine joins our stable of existing video-based apps including Video Time Machine, Political Time Machine and Holiday Time Machine. We look forward to releasing more in the very near future.”

“We’ve conquered the distant past, now it’s time to conquer the RECENT past!” said Justin Johnson, one of Video Time Machine’s original creators. “This is the only app that will make you realize how much time you’ve wasted in 2012 … and add to the problem by making you waste it all over again.”

2012 Time Machine is a universal iOS app that runs on the iPad, iPod Touch and iPhone mobile devices and is airplay enabled.

Disclosure: I was provided a download code to check out this app. Opinions are 100% my own.

One thought on “Missing 2012 Already? There’s an App for That”