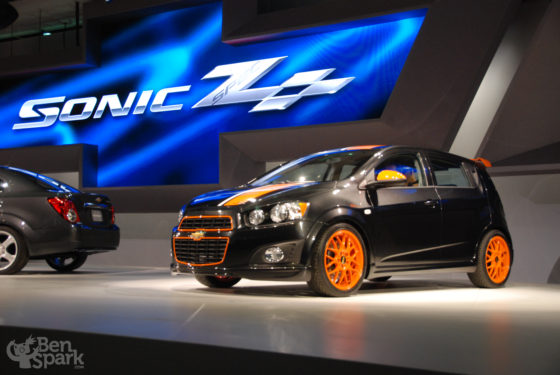 My Entire #ChevyNAIAS Set of Photos is now up on Flickr

Today was the first day of the North American International Auto Show. Talk about the big time. I have never in my life been a full on member of the media with media credentials and everything. I was able to get into everything and meet with so many high level executives from GM that I was astounded at the accessibility that I had. I was at NAIAS as a guest of GM and as such my transportation, accomodations and meals were provided for by GM. the opinions I express in this post are 100% mine. I was not limited in any way to just the GM line of products and as such will mention all that I saw and experienced. Today was a great day and I will try and recount it through my post, video and photos. So much happened that it is hard to get it all into one post but I will try. So pull up your coffe because I’m gonna take you on a ride. The morning started with some room service which is significant because I was one of the only people who actually got room service this moring. I guess the hotel screwed up or something. Mine was late but it arrived so I was good. I ate my breakfast and packed up my gear for a long day ahead.

Down in the lobby I met a bunch of the other bloggers as well as the superfans. There was a Chevy Superfan, a GMC Superfan, a Cadillac Superfan and a Buick superfan. They folks were so passionate about there cars. I sat next Chris on the people mover on the way to the COBO Areana for the opening press conference of the NAIAS (North American International Auto Show). Chris has a Camaro and he is also a big time Transformers fan. He even built his own Bumblebee costume! Also he presented a plague to Tom Stephens (Vice Chairman, Global Product Operations) during lunch later in the day and he had many people involved in making the Camaro sign the visor from his Camaro. He took the visor off his Camaro and wrapped it in bubble wrap and brought it to be signed. Chris is a super fan, and he is a super nice guy.

Each person was assigned to a representative from Chevy. I was assigned to the awesome Lisa Gilpin. Lisa and I met at Modern Media Man back in Atlanta. We’ve formed a good relationship ever since, again she is awesome and really made the event something special. So Lisa made sure that I was at the different interviews that I was supposed to be at. The first thing I was to be at was the opening ceremonies.

During the Opening ceremonies where they award the car and truck of the year I was able to use my Xshot to get above the crowd and take a good video. Unfortunately I thought I was recording the begining of the opening ceremony but hadn’t pushed record. ‘Doh. I did however get footage of the annoucement of the 2011 Car of the Year which was the Chevy Volt. I so want to drive one for a week or forever. This would be a perfect car for me and my daily commute.

After the opening ceremonies we went up to the show floor and it was incredible. The diplays that are put on by the car companies dwarfed those of the tech companies at CES. The full line of each of the manufactures were there including some companies I had never heard of and also there were tons of concept vehicles as well.

I stopped first at the SMART Car booth. I’ve been enamored with the SMART car for a while. It just looks like it would be fun to drive. After seeing the tricked out one at CES I would just love to have one and make it a Social Media vehicle for me to drive around and show people some great things. Instead of speakers and things like that I’d put a 42 inch (if it fit) monitor on the back of the car with some speakers so that I could play fun and interesting videos and record people coming to see the car. Something cool like that. I’m sure that the car could be tricked out to be a social media vehicle.

At the display there was the SMART Electric Bike. this was very cool because not only was it an electric bike but it integrates with the iPhone. No need for a bike computer there is an app for that. I got some information and took a bunch of shots of the SMART cars. Very fun booth.

I went over to the GM displays, there was Cadillac, Chevy, GMC and Buick. I was blown away by all the cool things that they had at the booth. There was a Camaro Convertible that was on a Hot Wheels track and visitors could take a time slice video of them jumping or doing something cool. A large row of DSLR cameras was there to capture your movements and then you could tweet out the finished picture or post it to facebook. so cool. I did one with EvaBear. Wish I wasn’t in Dress up clothes while I did it though.

I attended the Buick press conference where they unveiled the 2012 Buick Verano. This was a pretty decent reveal. The car appeared through smoke and it is a pretty nice looking vehicle. I took some shots during the press conference and also used my Xshot a bit to record some of it.

Then it was time for interviews with key people from the GM lines. I first sat down with John Fitzpatrick the Marketing Manager of Performance Cars for Chevy. He talked to us about a great many things all of which I captured on video. So you can take a look.

Kicking off with John was great. He had some good information for us and was very personable. I had a second interview with two designers of the Buick Line. They sat down with me and Tino (another blogger). I recorded that conversation as well.

It was then time for lunch. We went up to one of the Chevy Work Rooms in the COBO center. There we met with Tom Stephens and he gave a great talk about the company and then listed for us the huge collection of cars that he has. Wow, this is a guy knows his cars, loves his cars and loves working for an American car company. I mean from childhood he wanted to work on cars and seeing someone who has that passion to innovate and create really made me feel good about the brand. Tom was a personable speaker and it was nice to share our lunch with him.

We all went back down to the show floor and I explored a bit. I met with Clay Dean, Director of Design for Cadillac. Another video made and another interview where Tino and I tag teamed. Tino swears once in this video so don’t get too offended. I gave him shit about how I’d have to edit that out. Clay had some great answers to our questions.

I next interviewed Tony Disalle, Product Marketing Director of Chevy. This was another group interview and Tony had some cool things to say.

I basically had those interviews and tons of time to spend exploring all the booths. I walked all around taking photos of the cars and meeting up with some of my blogging friends like Adam Cohen of Dada Rocks and DadsTalking. Adam and I had a really great conversation. Adam was there through Ford’s Blogger outreach program. We didn’t see each other much but it was good that we did. Adam always gives me pause to think about what I could be doing better to actually promote myself and this blog.

One of the other bloggers, Jewel of Jewel’s Fab Life, was sitting next to me at the Buick Press conference and she has a hot wheels package that contained a green Tesla. I thought that was very cool because the back of the package shows the Tesla and a link to the media materials, this was one of the best press kits I saw at the show. So I went and got one for myself.

I visited a ton of the booths and there were so many beautiful cars to see. Later in the afternoon I had the opportunity to sit down amongst a group of bloggers to talk with chris Perry, the VP of Chevy Marketing. Chris was awesome and the interview was perfectly timed because John P. and Cali Lewis arrived just in time for the internview. Cali is in the video below of our conversation with Chris.

After that interview I went and got myself a close seat for the Chevy Press Conference. This was a great press conference and everyone was packed in looking forward to see Chevy’s newest car the Sonic. The Sonic replaces the Aveo line and it looks really sweet. There is a 5 door and a 4 door sedan. I like the look of the 5 door very much and when the Tricked out one came rooling onto the stage I pretty excited becuase it ad the exact color stylings of the Chevy Spark, which will be featured in the upcoming Transformers Movie. That and it looked darn cool.

After the press conference Chevy served sliders and beer. Man did those sliders taste great and they went down like nothing. So tasty. A perfect finish to the day at the Auto show. But while the day was over the night was about to begin.

The team met up by the Joe Louis statue in the COBO Center and we walked down to a shuttle but that took us to Mosaic. This was to be a very fantastic meal. While there I ate with Miss Motormouth and had a great conversation with her and Tony (didn’t get a card or his full name beut he was very cool) I had glass after glass of wine so I was very lose and animated but not in a bad way. I spoke with them about affiliate marketing and how they could tie more products and services into a blog. I was in Affiliate Improv mode I guess. If I could just turn that lens on this blog maybe I’d be able to do this full time.

Dinner was delicious, the conversation was awesome and then it was time for bed. Another long day awaits