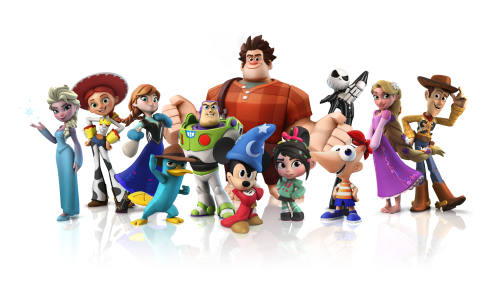 I was watching news out of D23 for e past few days, specifically the Disney Infinity news. I jkept seeing teasers that Sorcerer’s Apprentice Mickey was coming to Disney Infinity but now I finally have confirmation of that figure and much, much more. Disney Infinity just keeps growing and growing with so many characters. I’m most excited about the Wreck-It Ralph and Vanellope figures because I can’t wait to play with Eva as those characters. I’ve mentioned it before that I found their relationship almost like a father to a daughter and so that movie holds a special place in my heart.

There are even characters coming from the movie Frozen which will be released later this year. Rapunzel will be the first Disney Princess to make it into the game and so that must mean that more will follow. Hopefully Medrida will be added and other as well. Here’s the full release after the jump.

BURBANK, Calif. – August 11, 2013 – Today at the D23 Expo, Disney Interactive unveiled the latest additions to its all-star line-up of Disney Infinity, the company’s largest and most ambitious gaming initiative to date, set to hit stores on August 18. The newly announced Toy Story in Space Play Set, featuring Buzz, Jessie and Woody, will become the sixth play set for Disney Infinity and is scheduled to be released in October. The company also announced the next wave of playable characters for the Disney Infinity Toy Box mode, including Sorcerer’s Apprentice Mickey, and characters from Wreck-It Ralph, Frozen and Phineas and Ferb. These new character figures will be rolled out beginning this October, through 2014.

Toy Story in Space Play Set
Toy Story in Space will be the sixth play set to be released in October and features Buzz and Jessie in the play set pack, with Woody sold separately. Players can go on a new space adventure with the Toy Story gang as they help to relocate the Pizza Planet Aliens to a new world. Explore and discover the secrets that lay below the surface of this new planet and unlock Space Ranger equipment to help defend the new colony and friends. The Toy Story in Space play set introduces hoverpacks, jetpacks, laser blasters, goo blasters, new mounts and more into the Toy Box mode. In Toy Box, players can build and customize worlds, and incorporate these new items into their interactions with other Disney and Pixar characters.

Toy Box Characters
The newest character figures announced today will be playable in the Toy Box mode and will also come with their own “Adventure.” Each Adventure is unique to that character and allows them to play a short game. Players can invite friends to play through Adventures with them, with two players on split-screen or four players online.
· Just in time for Halloween: Jack Skellington from Tim Burton’s “The Nightmare Before Christmas”
· The first Disney Princess to be introduced into the Disney Infinity line-up: Rapunzel, from Walt Disney Animation Studios’ “Tangled”
· Video game characters from a movie within a video game: Wreck-It Ralph and Vanellope from Walt Disney Animation Studios’ “Wreck-It Ralph”
· The first Disney Channel characters to be showcased in the Toy Box: Phineas and Agent P from the Disney Channel’s “Phineas and Ferb”
· Keeping it cool: Anna and Elsa from the upcoming Walt Disney Animation Studios’ “Frozen”
· Leader of the pack: Sorcerer’s Apprentice Mickey

About Disney Infinity
Disney Infinity is an all-new video game initiative starring the beloved characters from Walt Disney and Pixar Studios’ most popular franchises. Players can place real-world toy versions of their favorite Disney characters onto a device called the Infinity Base and transport them into the virtual game worlds of Monsters University, the Incredibles, Cars, Pirates of the Caribbean and The Lone Ranger, as well as into a giant Toy Box.

About Disney Interactive
Disney Interactive is one of the world’s largest creators of high-quality interactive entertainment across all current and emerging digital media platforms. Products and content released and operated by Disney Interactive include blockbuster mobile and console games, online virtual worlds, and No. 1-ranked web destinations Disney.com and the Moms and Family network of websites.

About D23
The name “D23” pays homage to the exciting journey that began in 1923 when Walt Disney opened his fledgling studio in Hollywood. D23 is the first official club for fans in Disney’s nearly 90-year history. D23 gives its members a greater connection to the entire world of Disney by placing them in the middle of the magic through its quarterly publication Disney twenty-three; a rich website with members-only content at D23.com; and member-exclusive discounts and special events for D23 Members throughout the year, highlighted by the D23 Expo in Anaheim, California, August 9–11, 2013.