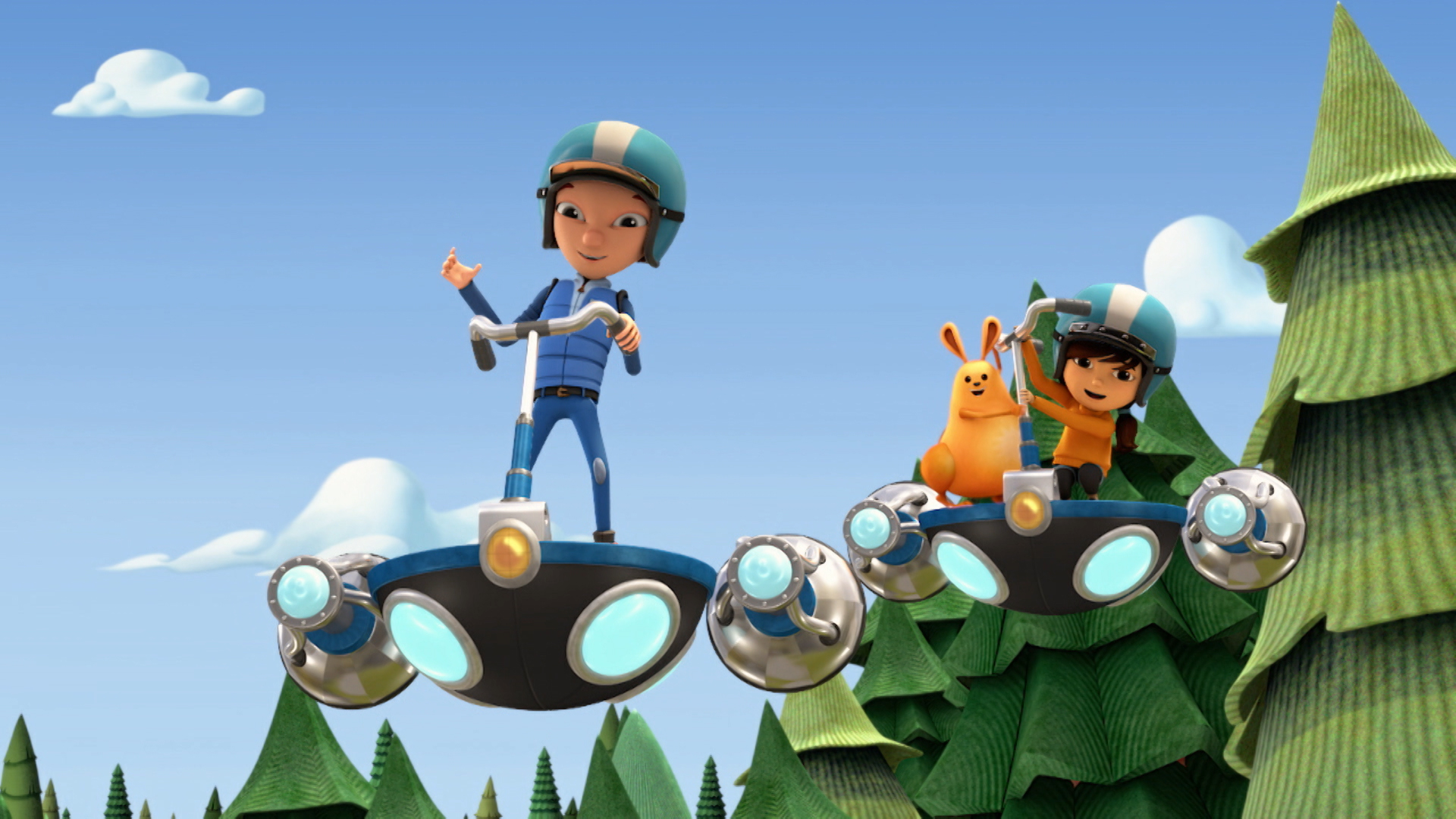 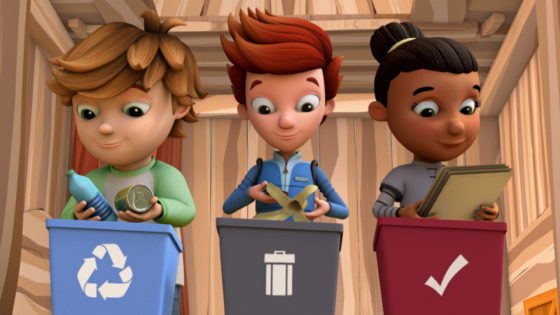 Today begins a week of all new episodes of the exciting PBS Kids show, Ready Jet Go!. I was fortunate to meet the creators of this show at the PBS Annual Meeting a few years ago and fell in love with the show and also astronomer Dr. Amy Mainzer. She is an utter delight and such a role model for kids. I enjoy her live-action interstitials during the show. I really wish that Eva could meet her. 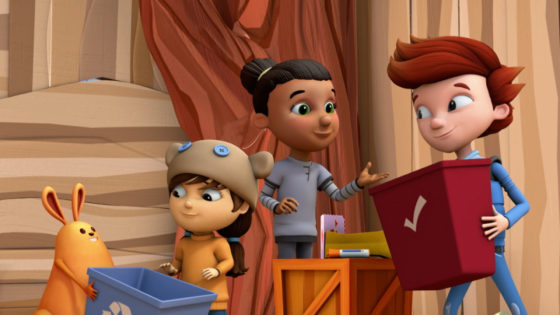 Mindy has finally turned five and is super excited that she is now old enough to go to space. But she’s planned a tea party in the back yard. The kids convince Mindy to move her tea party to the Moon! In her first trip to space ever, Mindy gets to board the Propulsion family saucer and experience space travel, rounding out their Moon tea party with a quick trip out to Pluto and back. 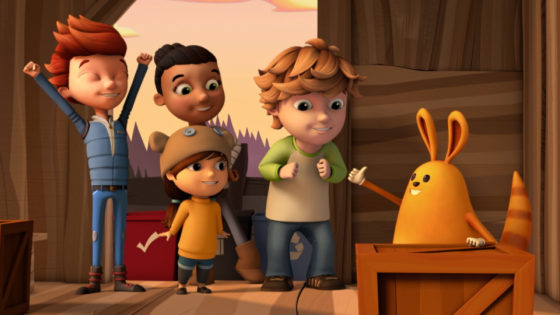 Jet is amazed to find out that the entire Earth doesn’t have the same season at the same time. So he flies with Sydney and Sean from the northern hemisphere to the southern hemisphere to compare and experience holidays in winter and summer…all in one day!

Mindy feels bad that she’s the smallest kid in the group, so sympathetic Jet and friends use a shrink-ray and become her size. The plan goes awry, and Jet, Sean, Sydney, and Sunspot become the size of mice. Mindy has to follow intricate diagrams to reverse the shrink-ray! 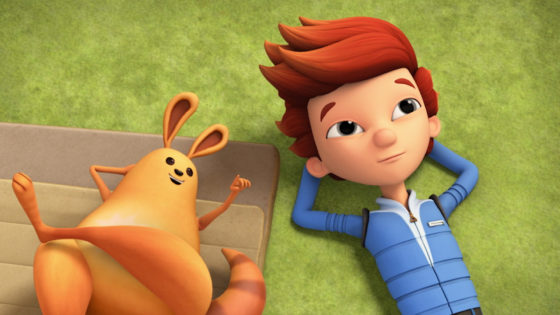 Mindy is impatient for winter, because she wants to ice skate. So Jet, Sean, Sydney, and Celery fly to Saturn’s icy rings to gather ice from them and return to build a Saturn-ringed skating rink around Jet’s house.

Jet, Sydney, Sean, Mindy, and Sunspot decide to make a scaled replica of the solar system using found items in their own neighborhood and in doing so learn that an Astronomical Unit is the distance from the Earth to the Sun. 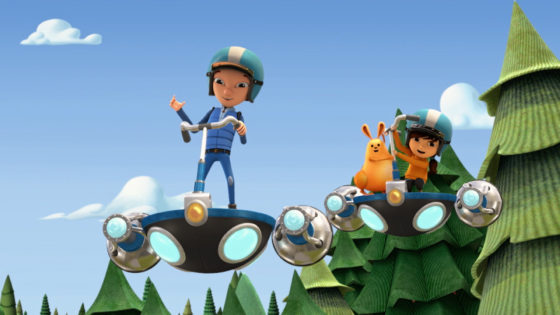 While making a cake, Carrot and Mindy find they are one are short one ingredient, so they head to the store. But Carrot accidentally pushes a wrong button on the wagon’s newly-updated control panel, and they take off into outer space! Using a diagram, methodical experimentation, and record keeping, Mindy and Carrot figure out how to properly fly the saucer back home, where they finally finish the cake.

Mindy has a problem: now that she’s been to space with the bigger kids, she realizes how much there is out there to see! How can she decide where to explore next? Sydney asks her mom, Dr. Skelley, who presents them with the very first edition of Commander Cressida comics! In reading the comic book, Mindy comes to appreciate that she, like Commander Cressida, can explore space “one adventure at a time.” 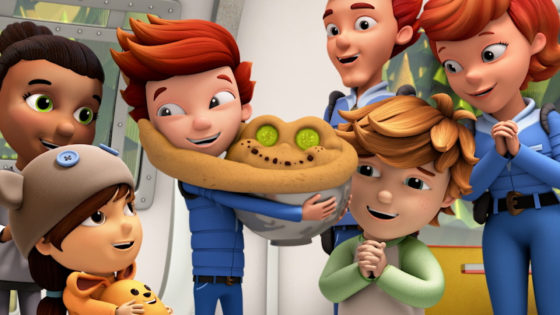 Mindy has to go to bed when the Sun goes down, but she’s having such a fun day with her friends. She asks Jet and the others to help her keep the Sun from going down. The older kids humor Mindy and try to help “slow down the Sun.” All their efforts make Mindy so sleepy that she decides to go home and sleep.

Sydney and Jet are having a hard time explaining to Mindy that the Sun doesn’t move – the Earth is moving around the Sun, so the Sun seems to move. Then Sean comes over dressed as his science hero Galileo, getting ready to do a school report. Mindy asks “Galileo” to explain why the Sun seems to move, and Sean practices for his report by explaining how the planets move, in character as Galileo!