Today I picked up two new Skylanders figures which are actually repaints of existing figures, sorta. First I stopped over at Walmart and picked up my pre-ordered Ship to Store Molten Hot Dog which is an exclusive to Walmart. Molten Hot Dog is a bright yellow version of the already released Hot Dog figure that I picked up back in January. 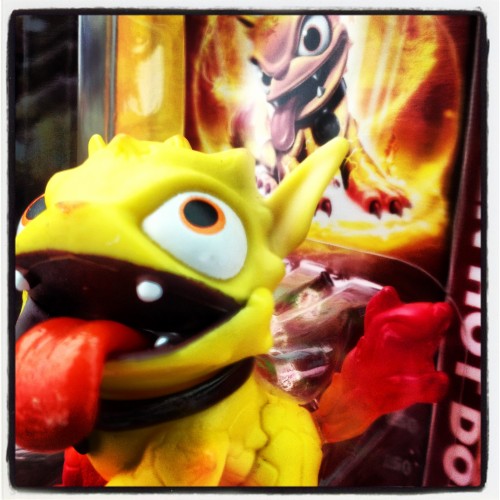 The other figure that I picked up was released today. This is actually a repaint of a figure that hasn’t yet been released. I don’t think I’ve seen a repaint released before the actual figure before but in this case it happened. Toys R Us has exclusives that they call Legendary figures. There were four from the Skylanders: Spyro’s Adventure and for Skylanders Giants there are 4 regular sized figures as Legendary and one giant as legendary plus this brand new legendary figure which is also a Lightcore figure. That one is Chill. I like the figure a lot. I just wish that her powers were better. Maybe I’ll try the other upgrade trail and that might be better.

In all it was a good day hunting for Skylanders. We’ve got 10 left to go in the Giants Series and then time to gear up for Skylanders Swap Force.