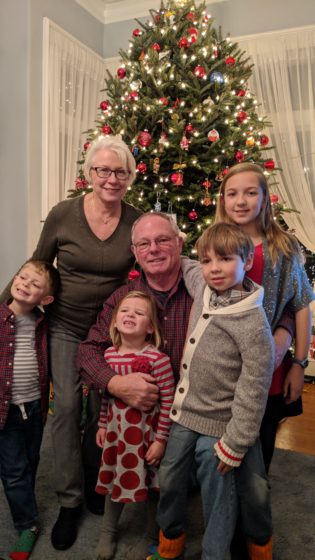 Our Christmas morning was a magical one this year. We got up around 6 before the kids. The one day a year where they are not dragging us out of bed. I thought that we were going to be waking Andrew up, but he wandered down. We had our cinnamon buns and opened gifts. the kids were very excited to give us the gifts that they picked up during Christmas Shoppe. We gave their their gifts and they were so excited. Neither kid said anything about how few gifts were under the tree. It was alight year this year because we are doing something very special that we will reveal below.

We also had FaceTime Christmas with Allison’s parents. They send up a box of gifts for everyone before Christmas and then we open them while we do FaceTime together.

I had a call scheduled for Mickey and Minnie to talk to Eva and Andrew and tell them that they were going to be going on a Disney Cruise. You see, I was invited to go to Disney Social Media Moms Celebration in February. It is a conference where I can take the family along and it is in Walt Disney World and also on the Disney Cruise. We’ll be sailing on the Disney Dream for 3 days. I also set up three cameras to record the kids’ reactions. However, the GoPro on my head wasn’t pointed the right way so I didn’t get much footage out of that one. I had better learn how to use that before we go on the trip. The phone call did not come in when scheduled so I tried to make the call come immediately. It still didn’t come so I had the kids come in to the kitchen where I had something very special set up. You can see it in the video below.

In the afternoon we went over to my parents’ house to have lunch, open gifts and celebrate the holiday. My parents got the kids new suitcases. They were American Tourister ones with Mickey and Minnie suitcases. Their cousins also got some suitcases and they were all wheeled ones. Next thing you know the kids are pushing and pulling the suitcases all around the house like they were new toys. It was great to see the kids be so excited about these gifts. Eva and Andrew were still riding pretty high over the Disney Vacation surprise. Exchanging gifts was chaos as usual but it was a lot of fun. Andrew and Eva couldn’t wait to give everyone the gifts that they got from the Christmas Shoppe. They were so proud of their choices for everyone. It was nice to see them so proud of what they chose and seeing how happy they made everyone. It was a nice afternoon and we had a lot of fun. The kids had so much fun.

After our visit we went over to Brian’s House for a Yankee Swap and some dessert. We had some dessert at my parents’ house as well because Eva made her very first cheesecake and it was very good. At Brian’s house we had fun at the Yankee Swap and also got to see Brian give his brother a crazy birthday gift. this year it was 1500 tootsie rolls with $50 in one dollar bills wrapped up inside some of them. He folded the bill in thirds and then rolled it up and re-wrapped it into tootsie roll wrapper. Luckily there were some kids on hand and they helped find the money. Andrew was very good at finding. We had a nice evening and then it was home to get the kids to bed. Another successful Christmas.