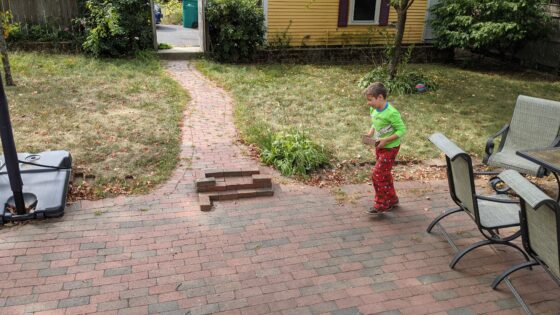 The kids were home today. They go to school every other day and when they are home they have projects to work on for school. Most of the time Andy has worksheets and things like that. Not today. Today he had to build a working dam. He did not tell me that this was his assignment. I found out because I heard brick hitting brick in the backyard. Andy was out there removing the bricks around the yard and making a dam. He was out there in his pajamas and bare feet. I had to gain my composure before I went downstairs so that I did not start screaming at him for being so careless.

I asked him what he was doing and he explained that he had to build a dam for school. Most kids made them out of LEGO and other things, not Andy. I had him put on clothes that he could work in and also shoes. It was okay if he used these bricks because I’ve never actually liked them in the backyard anyway but I did tell him that he could not throw them because the actual bricks of the patio could break. He spent a couple of hours making the dam and then filled up a big jug to see if it would hold the water. It did not. I suggested that he patch up the holes with mud to prevent the water from escaping. This held the water a little better.

His teacher loved his dam. 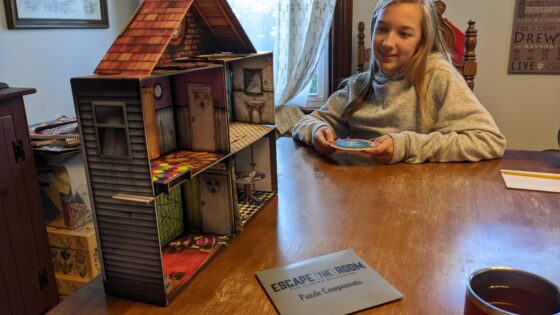 Think Fun provided us with an advanced copy of their newest game: Escape The Room The Cursed Dollhouse for free to play and review. Opinions are our own.

I love solving puzzles and figuring out clues in games. while I have never been to an actual escape room I have played a few home versions of escape rooms. Back in 2017 we reviewed the Think Fun escape room, Mystery at StarGazer Manor. We loved that game and even though it was for recommended ages 10 and up Andy who was 6 or so at the time could still actively participate and he enjoyed it. With this newest game it promises to be the scariest one yet. Think fun is not playing about that at all. This escape room is creepy and is recommended for ages 13 and up. If your child gets easily freaked out over creepy things then please take my advice and wait till they are older. Andy was really creeped out by the game. Eva was fine and wants to keep playing. I think Andy had his fill as we tried to go through 2 of the rooms.