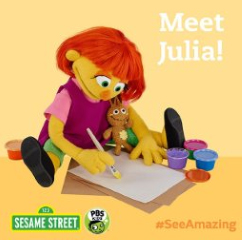 April is Autism Month. PBS KIDS will be airing special shows featuring autistic characters throughout the month. PBS will also have some great online resources for parents and teachers to learn more.

The full list of Autism-focused episodes airing in April can be found below.

The PBS Parents website has articles from doctors, disability experts and special education teachers on everything from identifying autism to educational needs, creating inclusive environments for autistic children and more.

Lastly, PBS Learning Media has great teacher resources and activities for children with autism that can be found here.

Junior Conductor’s Academy (Part II)
Now that Buddy and Dennis are friends, they have to work together (with the other kids) in order to pass a series of tests. If they succeed, they’ll receive their Junior Conductors First Class pins! But standing in the way of their success is the most challenging instructor of all… Thurston Troodon!

4/10 Arthur “When Carl Met George/D.W. Swims with the Fishes”
George is excited about spending time with his new friend, Carl, who seems to know all kind of cool facts about trains and about… well lots of things! Then George learns that Carl has Asperger’s Syndrome – a form of autism that makes Carl see the world differently than most people. Can George and Carl remain good friends – and perhaps even learn from each other? / D.W. and James enter the pre-school swim meet and recruit their big siblings to coach them. All goes swimmingly until Arthur and Molly start taking their jobs a little too seriously. Who’s this race about, anyway?

4/11 Arthur “Pets and Pests/Go Fly a Kite”
There’s a mouse loose in the Read home! And D.W. wants it gone…NOW! When traps fail, Arthur enlists the help of an expert mouse catcher…a fearless hunter who laughs in the face of danger: Nemo?? / While playing in the park, Binky, Muffy, and Ladonna stumble upon an abandoned kite. After failing to find the owner, the trio decides to take joint custody of the toy. But sharing it is easier said than done…

4/12 Arthur “Carl’s Concerto/Too Much of a Good Thing”
Carl has agreed to play the accordion for George’s puppet show. But his routines are getting in the way of rehearsals. Now George must decide: keep Carl and risk the show, or replace Carl and risk his friendship? / Buster enlists Binky’s help to keep him from gorging on delicious Tuvaluna cookies. Will Buster’s self-control hold…or crumble?

4/13 Arthur “He Said, He Said/Bunny Trouble”
A special episode of Bionic Bunny is interrupted, and Arthur, Buster, and George try to remember what comes next. But Carl is the only one who can straighten out the story. / D.W. is excited to be taking care of the class bunny, Larry. But when Larry is feeling adventurous and wanders off, it’s up to Ladonna the “Bunny Whisperer” to help get him back.