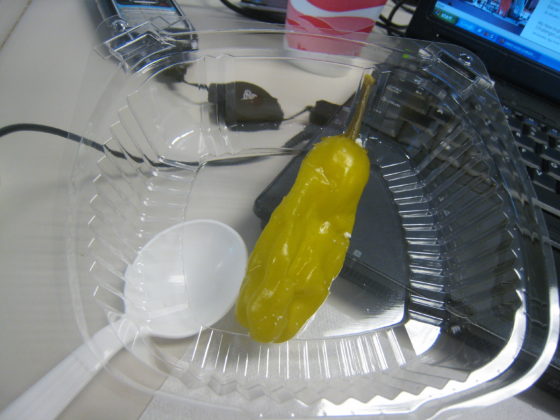 So, I’ve been on a huge Pepperoncini kick lately. I think it started at T.R.’s wedding. there was a fancy plate of Hors D’Oeuvres and on it were some Pepperoncini and fancy olives. I was munching away on them and realized that I really like them: hot, not so hot and mild I enjoy the pepperoncini. Then I realized that we had a jar of them in the fridge so I’ve been taking them to work instead of olives.

My kick for hot and spicy flavorful peppers may also have been sparked by Mr. Ducke. Mr. Ducke is a local photographer who also like the Capron Park Zoo. He shot a photo of a recent pizza that he had with pepperoni (not to be confused with pepperoni (wikipedia actually says this)) and banana peppers. Normally I steer clear of all things banana related, seats clips and splits. However, I found my self wanting to have a pizza of this very same combination. So I got myself some Red Baron pizzas and a jar of hot pepper slices. Sure it is not the same as getting it fresh from a pizza shop but it did okay in a pinch. Besides I wanted the $5.00 coupon for the newest Teenage Mutant Ninja Turtles (aff link) game. But I threw out the sales slip and it got grossed up in the trash so that was a bit of a waste. The pizza wasn’t terrible either so I might buy some more, it is on sale at our local stop and shop so why not.

Okay so back to the pepperoncinis (aff link). I overslept today and had to get to a different building for work and also bring my car to the shop so I didn’t get to take my lunch (I had planned to get up and make lunch right before I left the house). I was late so I got lunch at work and while I was deciding what to do for lunch I saw a bowl of pepperoncinis and that made the decision for me, I was getting a small salad. I got back to the desk and took a big bite of this pepperoncini and suddenly my pants were soaked. It was as if I bit into a spicy water balloon. The pepperoncini was full of the pickling liquid. That is okay it dried quickly and I still like them. Does anyone know if Papa John’s still gives you a couple of them with each pizza? I can’t eat Papa John’s as it wreaks terrible havoc with my insides. It is no fun for anyone.

Switching Gears altogether I am working on some projects for the coming year. One thing that I am going to focus more on is my photography and my Photo-A-Day project. I want to try many more products out including the Eye-Fi Wireless SD card. There are several different versions of this card but the ones I am most interested in are the ones that automatically geotag your photos. I want to make sure that my photos from 2010 are all geotagged, properly tagged and labeled and posted in many more places.

* Working in any way with ShutterCal was a mistake. They closed down and screwed over so many people. I ended up losing all my photos that were linked on this blog using their code.*

For now my two main places to post are Flickr and ShutterCal with ShutterCal becoming the official home of Photo-A-Day for 2010. I’ll soon be working very closely with them on many endeavors. You may have noticed that I’ve started using ShutterCal to host my Photo-A-Day images and display them here on BenSpark.com. The Eye-Fi doesn’t work with ShutterCal at this time but I wish it did because that would make all of my uploading at one time great. I’d also love to see geotagging and tags supported at ShutterCal. Just makes for easy searches. Although it is really simple to see the photos that people post because ShutterCal has a fantastic interface in place already. Stay tuned for more about my relationship with ShutterCal.

* Working in any way with ShutterCal was a mistake. They closed down and screwed over so many people. I ended up losing all my photos that were linked on this blog using their code.*

Also I changed up the amazon sidebar, I noticed today that it put up an “interesting” video choice based of what I titled yesterday’s post. I can only imagine what would have been chosen to display based on today’s post title. So now I have the most popular point and shoot cameras over int eh sidebar.