I have two photos with groups of people in them that are bonus pictures from today. Since I couldn’t decide between the lunch and dinner photos of the groups of fellow diners I choose a picture of my tasty lunch at Isaac’s Deli today. Isaac’s is a great little deli in and around PA that has a funky theme. Each of the sandwiches are named for birds. The mascot is a pink flamingo and they use Pretzel Rolls. Great big soft pretzels baked as rolls for your sandwich. Fantastic. I got the Texas Wren. Don’t think that if your favorite sandwich is not on the Pretzel Roll page that it means you can’t get it on a pretzel roll, no sir. You can get any sandwich on the pretzel roll, it is up to you.

We went to Issac’s with Elise and Charles and Elise’s sister Amy. Amy just got back from camp and she had a great time. We are looking forward to our next vacation up to Elise’s parent’s place in Maine when we can see Amy again. We had a great meal and a great afternoon. Here’s Bonus Photo #1. 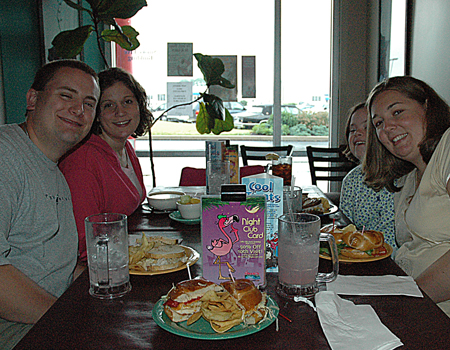 After we dropped Amy back with Elise’s parent’s we went back to Elise and Charles’ place, I caught a quick nap before Justin and Vicki arrived at the house. We were going to go mini golfing or something out of doors but it was pouring so we opted for dinner and a movie. For dinner we went to Gullifty’s for dinner and it was really tasty. They had a huge selection of meals and they had great fruit flavored lemonades and Iced Teas. I’m a huge lemonade fan myself and 9 times out of 10 I choose it as my dining drink. I did have a Lager Lite and then switched to Strawberry Lemonade. Such a good strawberry lemonade, not as good as the ones I had in Oregon at a place I can’t remember the name of. I need to go back there again and have another meal. Someday I’ll get back to Ashland, OR.

After dinner we went to the West Shore Theatre, a second run theater where movies are $3.00 each and they have a reasonable snack bar too. It is a good historical theatre and I hope the doors stay open. We lost the zeotrope in Franklin, MA and that was a big loss to history as well as small independent theatres in America. If there is a small independent theatre near you, go support it. We ended up seeing The Break-Up. I liked it, I liked it for many reasons, 1. Peter Billingsley is all grown up and producing and acted in this movie, 2. Vince Vaughn’s delivery of lines, and 3. The ending, which I won’t give away but it was good and realistic. Elise did not like the ending.

It was very nice to see Vicki and Justin and get to talk. We found out that Charles, Justin and myself are all very in tune with the finances of our households, to a similarly scary degree. 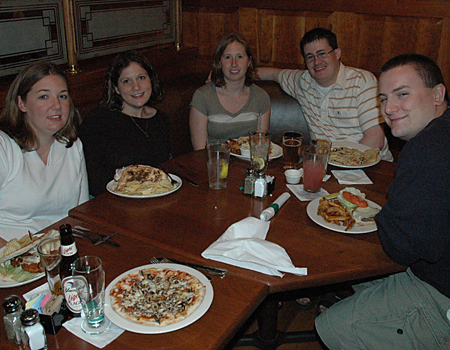