All in all I ended up spending less than 24 hours in Kalamazoo Michigan. This was about the shortest trip Iâ€™ve ever taken. I got in to the hotel yesterday around 4 or 5pm, I canâ€™t remember, probably because I went from East Coast Time to Central Time and then back to East Coast Time, I was all over the place. But as I learned, there was a lot to do in Kalamazoo. I could have gone over to Battle Creek to learn more about Kelloggâ€™s cereals. I would have enjoyed that very much. I also could have gone to the Air-Zoo in Kalamazoo. That was a pretty neat place.

I did end up popping into the lobby of the Air-Zoo there for about 15 minutes to check out the gift shop and buy a Kite for Allison and I to use at the Cape. (Also to get the Photo-A-Day.) It is a 3D kite that looks like a fighter jet. I canâ€™t wait to try it out and get some pictures, maybe even some video. Weâ€™ll hopefully get to use it this weekend at the Cape. The kite is in a 4 foot tall plastic container and I was lucky to get it on the first leg of the flight home with no problem. They did have quite a selection of balsa wood planes too and I would have picked one up for Andy but I was afraid it wouldnâ€™t survive the trip.

I got to the airport, returned the car, performed my quick change in the bathroom to much more relaxed clothing and went to the counter. At the counter the guy there asked if I wanted to get on an earlier flight to Chicago. Sure, either I wait in Kalamazoo or I wait in Chicago, neither had internet access so It made no difference to me. The way I figure it the closer I am to my final destination the better. So now I am in the Chicago airport awaiting my 6:00pm flight. I should get home to PVD at 9:15 where Allison will be waiting to pick me up. That is unfortunately the one thing we didnâ€™t plan very well; how I was going to get home from my trip. But it is a good thing for her to learn where the airport is and how to get there for any future passengers she may have to pick up.

On my flight to Chicago I met a pilot who was from Kalamazoo. We talked through the flight and it was enjoyable. You know my rule by now, I am pleasant and return greetings but am not an initiator of conversations. Flying time is my reading time. The pilot started the conversation so I kept up my end of it. Today is â€œImprove Your Handshake Dayâ€. I heard that on the Bob and Tom show this morning.

Iâ€™m working through the last 100 pages of Flashback and expect to have it finished before I get home. That means I have two books left to go before I start on the Kathy Reiches series. I have to remember to pick up a bookcase soon to put all of our beach books in while at the Cape. Iâ€™ve got some Buffett ones and some Carl Haissen ones, Iâ€™ll have to finds some other ones with a fun beach theme.

I caught up on the Multiplex comic strips, now I have to wait every Monday to see a new one. Speaking of Web Comics, donâ€™t forget that on July 8th Wes Molebash will be at Double Midnight Comics signing his new book, a collection of Youâ€™ll Have That strips. For the weekend we will be Wesâ€™ personal chauffeurs and entourage. Wes is a cool guy; he didnâ€™t request anything like a bowl of light brown M&Ms or anything, because, you know, I would have had to go back to 1985 to get some. If you are in the Manchester area please come and stop by the store, buy a book and get it signed by Wes.

7:55pm (My flight ended up being delayed by alot): This has to have been one of the most whacked out flights I have ever taken. Not because it took off and arrived hours late, not because we sat on the tarmac forever, but rather it was the people.

There was a woman two rows ahead of me with a SARS mask on. Her husband was seated behind her and he downed a couple of bottles of wine, and their kids sat in the row across from the mother. The kids were, as my mom would have described them, ‘Noodges’ (pronounce the nood like the word hood or good, which these kids were not). In between attempts to drink away his cares the father would get up say something menacing to the kids to get them to behave and then sit back down. A couple of times he would reach across the aisle and smack the back of the seat. While his kids may have been used to this behavior, I don’t think the same can be said of the people seated behind the children.

This must have scared the crap out of the little old man and his wife who were seated behind the kids and in front of me. Had I been seated there I would have jumped a bit and probably been forced to say something or at least give this guy a look of disapproval. I mean come on, what are you doing?

I find that in an enclosed space with 30 to 40 strangers it is best to adopt an air of civility to some and relative indifference to other fellow passengers. I ignore the crying babies, the newspaper readers who thrust themselves into my meager space and I can even deal with the recliners. It is when someone completely breaks from the norm that you have no choice to take notice and if it directly effects you, to react. I’ll help someone struggling to lift a heavy bag, but I’ll be impatient with my self important businessman who has already put both of his carry ons in the overhead (incorrectly to boot) and is taking his sweet time to put his suit coat up as well. We get it, you are important and the rules of common courtesy and good behavior do not apply to you, bravo! (which translated into my words means go choke on an olive at your next 3 martini lunch.)

Now SARS woman and the wine aficionado and their delinquent kids weren’t the only odd travelers. Nope, there was a lady in the back who had about four kids under the age of six including a newborn. Something she was doing was against the almighty FAA regulations and she and the flight attendant had words, the last of which from the flight attendant were, “I don’t care what you do.” This was followed by the flight attendant walking back to the front of the plane as the woman in back raised her voice so everyone could hear and jeered at her retreating back, “I see some free tickets coming my way.” And then she went on to make some demeaning comments about the ‘stewardess’.

Another employee of the airlines went down to talk to the woman and explain the situation and the FAA rules. The woman in the back demanded the name of our flight attendant and a number she could call to complain about her.

Two things I observed from this. The flight attendant should not have lost her cool with this woman, this woman is the type who feels entitled to being treated as the queen of Sheba and will bitch and complain to anyone who will listen to her woes (believe me, I know a few and can easily spot them.) The second thing was the actions of the woman in the back of the plane. Relax lady, you are not that important and you need to follow the rules like everyone else. Nobody wants to sit on the tarmac in uncomfortable silence listening to you drone on like a jackass about the way you have been wronged. We’ll sit in uncomfortable silence waiting to take off over an hour and a half late without your shrill harpy tones cutting the stale recycled air, thank you very much. Don’t add to the discomfort by being a complete l
oudmouth jerk.

I did manage to finish Flashback, one of the best Nevada Barr books so far. A dual tale of historical fiction and modern day fiction. The jumping back and forth chapter to chapter kept me deeply engrossed in the action. This may be a frustrating style for some readers but I think it enhanced my enjoyment overall. Barr’s characters are so distinct and imaginative, not as wacky as Carl Haissen’s but pretty out there.

The kite is in the front closet of the plane, I hope it does not get crushed. This flight attendant asked if it could possibly get damaged, I figure the hard plastic case could take a couple of lumps and retain its shape. I hope I am correct in that assumption. I just have to remember not to forget it when I get off the plane.

The plane finaly landed at 11:00pm. We got home at 12:00 midnight. Up at 5:45 to start the day. I am tired. Thanks again for picking me up last night Allison. Oh, and the kite is perfectly fine. So look for pictures and video next week. Some bonus Pictures. 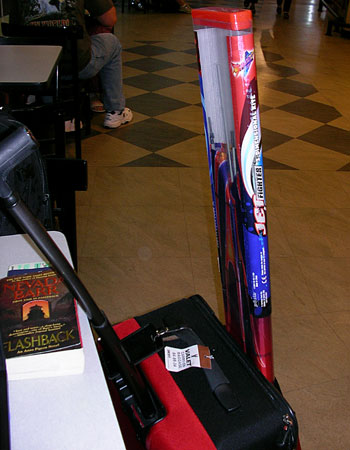 That is one big kite. 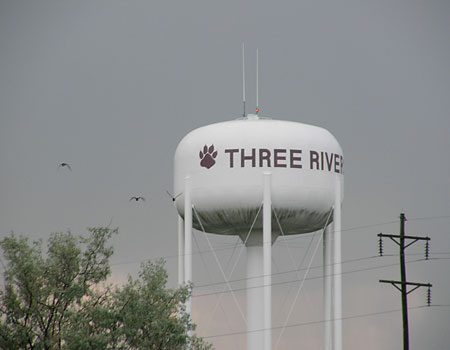 The water tower in Three Rivers, there was some cool lightening around but I couldn’t capture any. 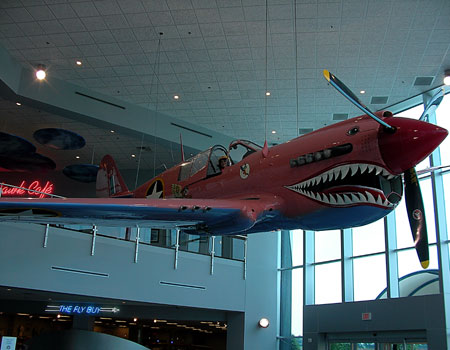 Another shot of the plane at the A-Zoo

One thought on “Kalamazoo Air Zoo”