So today I wanted to give my review of Alton Brown’s new show Feasting on Asphalt. Why no review? The power went out at our house on Friday evening. What this meant to the VCR was a total wipe of all programmed tapings. So no Psych on Friday night, no Feasting on Asphalt on Saturday night. No problem, we got back last night at 10:15 to find the VCR fiasco. I jumped online to see when the show was being rebroadcast, come to find out it was coming up at midnight. And there was another great show called Behind the Eats which was a reveal of all the cool things that they do on Good Eats. That was going to be on at 3:00am.

I reprogrammed the TV to the cable stations and reset the VCR to tape the two shows. (Those of you who are paying attention might see where I am going with this.) I failed to program the VCR to the channels. I had the VCR on and I saw channels and was able to change channels so I thought I was all set. But I was not. I planned to watch the shows this afternoon while I did laundry and other things around the house. I put the tape in the VCR and all I got was a blue screen. I fast forwarded and tried again, blue screen. I jumped up and down turned around and touched the ground, blue screen. So no review of Feasting on Asphalt, no Good Eats and no Psych. Argh! I got the VCR thing taken care of however and set it for all the episodes I missed and all the new ones this coming weekend. So I will have at least two episodes reviewed sometime next week.

Another of Tara’s lilies bloomed the other day. I wish I could tell you the name of this one it is very cool. I laid down on the ground to shoot the Photo-a-Day and I took these other two shots from above. I think Tara should join The North American Lily Society, they have a seed exchange, much cheaper than the $150.00 a bulb lilies they sell out there. 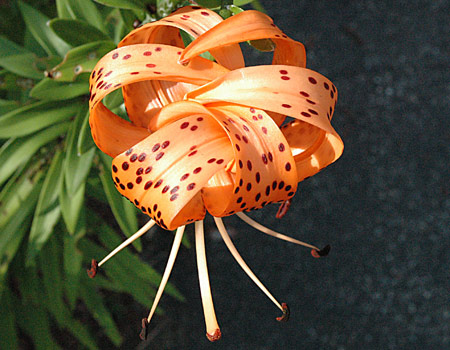 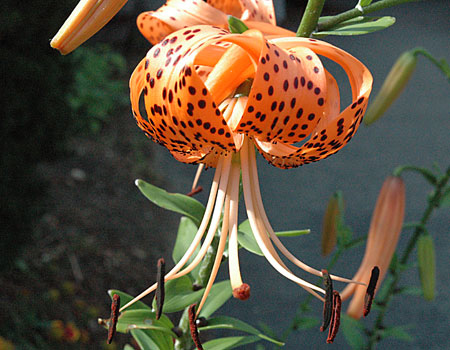