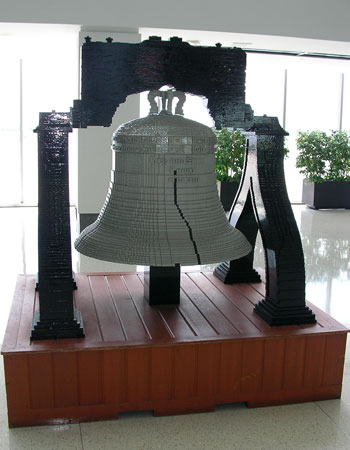 Today I had a demonstration in PA. It was about Â½ an hour away from the hotel. I just made it on time. I had woken up in plenty of time but I was futzing around checking on things on the Internet. I was trying to download some of the â€œWhat the Muffins?â€ episodes. Those are going to be taken down sometime soon and I donâ€™t want to lose them. The guys are planning something brand new and are getting rid of the old stuff to make way.

The demo was interesting. I demonstrated in an office and sat on the edge of a seat while the computer teetered on a desk and the projector shone on the wall, high-tech. I had to use a dial up connection as well because the Internet connection in that room was not turned on and the site had no IT people.

After the demo I went and hauled ass to the airport. I had a 2:45pm flight and wasnâ€™t sure how the new travel restrictions were going to affect my trip. I also had to gas up the car and had no idea where the stations were. They are not located very close at all and there are no signs. So, be aware you travelers returning cars to the Philly airport.

My flight from Philly to DFW was pretty uneventful; however, it was long. I made it to the airport in plenty of time for the flight, security wasnâ€™t an issue and neither was check-in. So I worried for nothing, but had I not then everything would have gone wrong. While in the Philly airport I came across this Liberty Bell made out of Lego. I was walking by to find something to eat and I saw it and had to stop to make it Photo-A-Day.

So the new electric razor ripped up my neck something fierce. Iâ€™m going to have to get used to it, but I canâ€™t use any moisturizers because those are gels and I canâ€™t bring them on the planes. Iâ€™m not paying $4.00 or $6.00 for something I have to throw out before I get onto the plane. So Iâ€™ll moisturize when I get home and power through it while on the road.

I finished reading Death Du Jour on my flight from DFW to Tulsa. It was a good book but similar to the first book in that the resolution happens so quickly. I did like the character development as well and there was one part that was sad but it got better.

When I landed in Tulsa I had dinner at Sonic. I can now say that Iâ€™ve been to Sonic. That is about all I can say.

I am off to look for free wireless Internet access and I hear that there is some at the local IHOP and they are open all night.

After finding the IHOP I settled into a seat and ordered water and the funnel cake dessert. I am signed onto the IHOP networks. Pretty interesting experience. I took a picture for the bonus Photo-A-Day today. 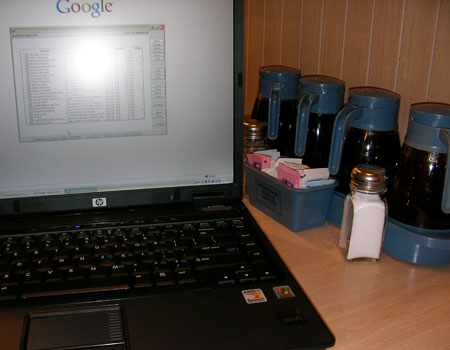 Sorry this was late Andy.