I noticed this sign eating tree two days ago on my trip around town while using the GiSTEQ PhotoTrackr. It is so interesting how the tree looks like a mouth engulfing the sign. The sign itself has started to bow out too. Just an interesting looking sign that I wanted to make sure and photograph.

Also on the ride I saw some wild turkeys up the road from where the Train Mailbox was located. They were jumping over a wall and wandering around. Before I left work I took a couple of photos of the water fountain outside the office. The water as it came over the crest of the fountains edge would fall apart in different ways and I captured an interesting looking face in the water. Looks like the face that tree might have had.

It seems that the folks at Buzznet have seen the potential in my images. I finally got one of my images made into a featured photo. I can’t figure out who nominated me though. Anyway it was this photo.

It is funny, that photo was something I did as an experiment for Photo-A-Day #840. I never gave it much thought as a good photo. I just thought it was rather interesting.

Contest update. Not a huge amount of movement today There is a neck and neck race for first place. Lisa dove right into the competition and is tearing it up. Remember folks there are so many ways to get points. A comment on each photo on Buzznet, Flickr and Zooomr gets you 5 points and that is any photo I uploaded in the past week. I take and post tons of photos each day and this weekend will be no different. Also, over the weekend the Photohunt and Green Thumb Sunday photos are fair game for points for comments. 5 points for comments on each of the images as well as on the posts themselves.

Updated 7:49PM. Okay this is awesome and weird at the same time. I just put up my Photo-A-Day on Buzznet and it gets featured. That is the quickest ever. Here is the Screen Shot. 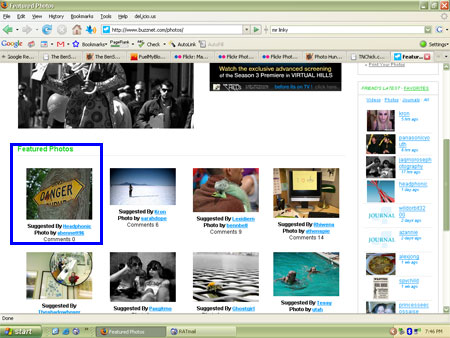 And today I also found out that some of the people who work for Buzznet saw that I was nominated in the BCA’s and they sent out a message tot he rest of the people at Buzznet to vote for me. Wow!