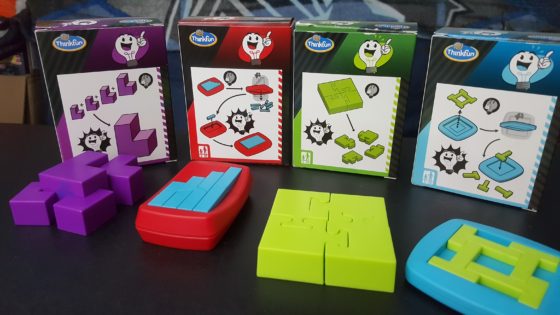 ThinkFun sent me four of their Pocket Brainteasers to play with and review. The opinions expressed are my own.

When I received these new Pocket Brainteasers from ThinkFun I brought them with me to Andrew’s karate class. We were there early so it was nice to have something to do with Andrew that was not him asking to use my phone. The Pocket Brainteasers have four levels of difficulty. Each puzzle can be solved, even though I still cannot figure out the solution for the Fifth Chair. As we played more kids and parents came over and tried out the games with us. At one point it was me and another dad trying to figure out the Fifth Chair and REC-TANGLE. REC-TANGLE was one that took me a while but once I figured it out it was such an Ah-Ha moment.

The nice thing about these is that they can travel well and can keep kids and parents alike occupied for some time as they try to solve the puzzle. You can put them in the seat back pockets of your car or in a purse. I do like that the REC-TANGLE’s case has a cover and is the most perfect puzzle for travelling. The 4 Piece Puzzle would also travel well because it can be one piece that is super hard to take apart so you won’t worry about losing the pieces. But the 4-T Puzzle and the Fifth Chair do not have cases and I would have liked to have seen one for each of these.

You can find out more about these Pocket Brainteasers at https://www.thinkfun.com/products/pocket-brainteasers/ These are $6.99 each and are for ages 8+.