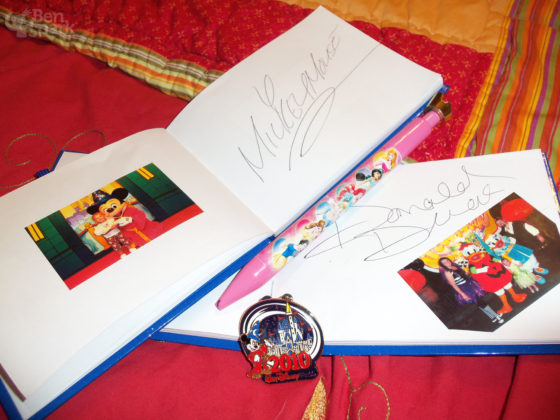 So, we are now back at home after spending nearly a week at Walt Disney World in Florida. Our vacation was a really nice one and it was great to be with the family all week and not do anything online save a few tweets and mobile posts to facebook. Other than that I took a break from Social Media and Blogging. I continued to take my photo every single day because that is what I do. And besides, I was on vacation and so taking photos was a natural fit.

When I came back from Modern Media Man I decided that it was time to make an overall change to how I approach social media. I was spending so much time tweeting, on Facebook and writing long blog posts that I wasn’t getting to enjoy the time I spent away from work because I just gave myself more work. I decided that vacation wasn’t going to be all about work either. I was going to trim things down to the essentials and that meant I was going to streamline the way I operated. On nearly every vacation I can think of I toted around a backpack that was filled to the brim with video cameras, a DSLR and a bunch of point and shoots. Guess how many I used on those trips? Just the DSLR. I never took out the video cameras and hardly used the point and shoots. So this trip was to be different from the start. I contacted Kodak and asked them if they would provide me with a Kodak point and shoot to take with me on vacation. They came through for me by providing me with a Kodak EasyShare M580 to bring with me. I am also taking the month of October to shoot with that camera exclusively. I took over 800 photos, videos and cool panoramas using the M580 on vacation and I love the camera. I will do an in depth review of the camera at the end of the month detailing everything that I’ve learned while using it but for now I can say it was the perfect camera to take on vacation. I always had it on my hip in a Lowepro Ridge 20. I had access to it everywhere and didn’t have to worry about bumping into people with my big Bulky LowePro Fastpack 350 Backpack. I did take that into the park on one day and I was miserable lugging it around, finding a place to put it and juggling Eva when I had it on my back.

I said in yesterday’s post that I would talk about what happened on the way home. It wasn’t good and it is still going on. We brought our bags to the front desk and checked in for the airlines. Because we were traveling on SouthWest vacations we needed to have paper tickets with us. So I checked us in and we got the boarding passes (or so I thought, they were actually just security passes, more later). I was also able to check our bags, two large uprights and two duffels. We did this at 6:41 am and then headed to the Hollywood Studios for our last Character breakfast. We stayed int he park till about 11:00am, then got a bus back to the hotel to get picked up for the Magical Express. I like the Magical Express… When we arrive at Disney. The thought is gone when you use it, you just have to arrive and get on the bus, later your bags come to your room. No hassles with taxis and anything else. It is convenient and quick. But, on your way out of the park you have to stop and pick up multiple people at multiple places and when you are already a wreck about getting the family to the airport and getting through the nightmare that is modern air travel any extra minutes waiting causes me anxiety.

I didn’t have to worry though, we got to the airport and through security in plenty of time. We even had time to come down and read and have a snack before leaving. Then the rain came. Pouring rain with Lightening and Thunder. The flight that was to come into our gate ended up diverted to Jacksonville and so we were delayed two hours. However when the lightening came the ground crew ran for cover but didn’t cover the bags. I know this is the case because when our bags arrived today (we landed last night at 8:30pm) they were still soaking wet. Only two of them were though, the other two were dry. Luckily those two contained things that would have been completely ruined and irreplaceable had they gotten wet. One item was Eva’s autograph book. The autograph book that wee took with us last May when we first started getting autographs and then continued that book and bought a new one this year because she got a ton of autographs. That book, had it gotten water logged and ruined would have been really hard to take.

That is not to say that things did not get ruined. Allison’s mom bought Allison and Eva a bunch of new clothes. Those clothes were in the soaked bags. Clothes, Shoes, and dresses. Many of them were fine but quite a few still had the tags on them and the tags ran, all over the new clothes. Also, remember that hat I mentioned, the one that had all of my Disney pins. That was nowhere to be seen. It was either stolen or it fell out of the duffel bag, unlikely a scenario. So for every trip I’ve made since 2005 I had at least a couple of pins, they are now gone.

There is nothing like having your luggage lost, items stolen, flights delayed and oh yeah personal items ruined to slap you back into the reality that you are no longer on vacation.

One last thing, when you check in at the hotel, double check that you either have just a security document or an actual boarding pass. I did not read that correctly until the woman at the gate told me that I was not actually checked into the flight. That rush of adrenaline right before we were to board did not help my anxiety one bit. I dashed over to the counter and cut about 30 people to get us checked in and onto the flight. Luckily the flight was pretty empty so we did not have to split up when we flew back. We settled in, Eva fell right to sleep and Allison and I were free to watch our videos, read and enjoy the flight. Some give, some take on that whole day of travel.