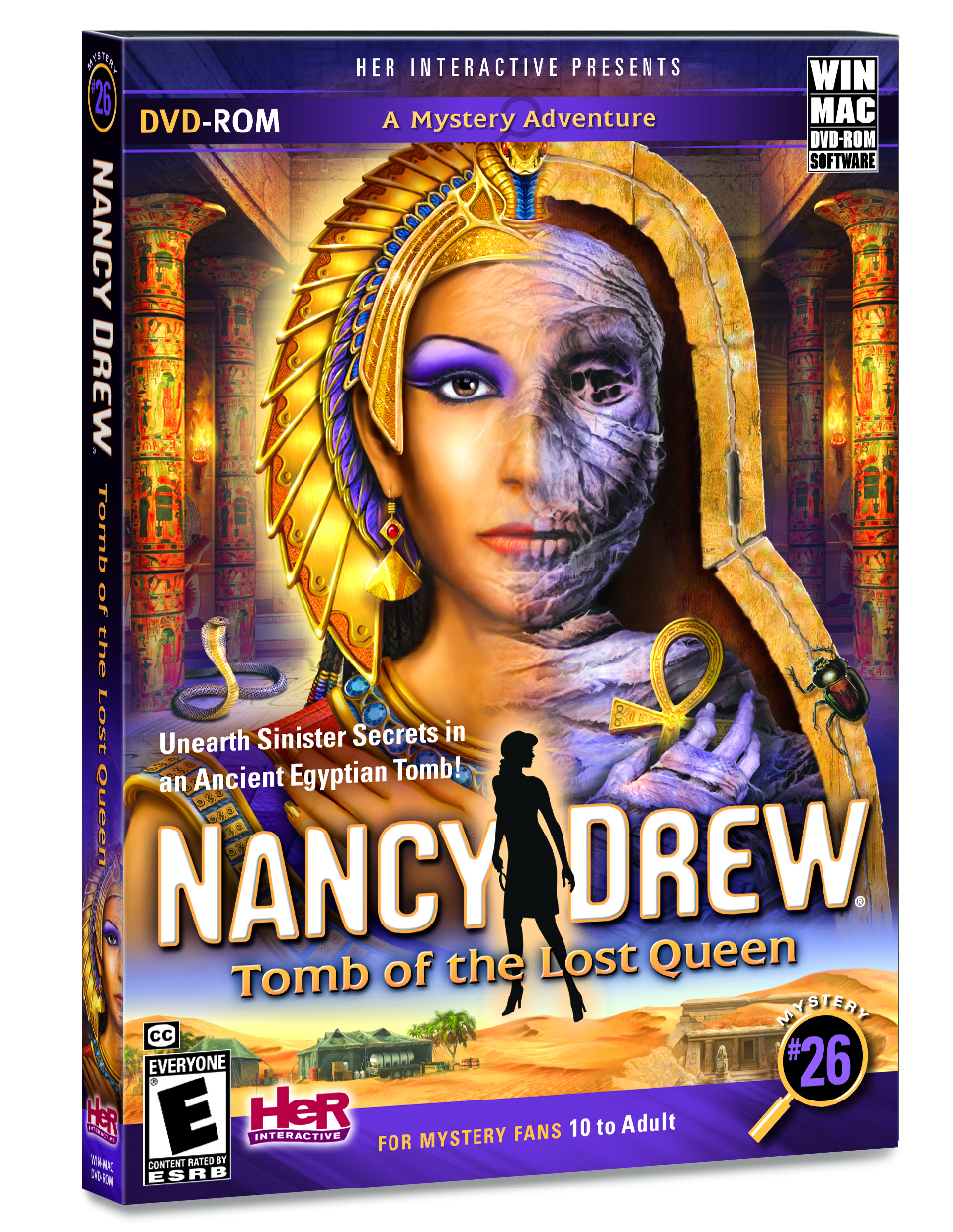 Nancy Drew is a favorite character of our family. She even helped us get our new house. I told that story a ways back but because of Nancy Drew and specifically the Nancy Drew app for iPad turned Eva on to the character and now she simple loves it. Recently Allison bought the first 6 classic Nancy Drew books. So we read the books to Eva, she knows the character and now we have a new game that we can play together. The game is Nancy Drew: Tomb of the Lost Queen, and it is a computer game. We got a copy of it for the MAC and have not had a chance to play it yet. We will be doing that very soon. I do have a press release all about the game and it sounds like a lot of fun. We’ll do a full review once we play it together.

BELLEVUE, Wash., May 8, 2012 – Leading video game publisher and developer Her Interactive, today announced the launch of the 26th edition of the award winning series with Nancy Drew: Tomb of the Lost Queen for PC and Mac and its immediate availability in all major retail stores and at www.herinteractive.com for $19.99. In this all-new Nancy Drew adventure, Egyptologists and archaeologists are abuzz about recent discoveries by a university dig team, but suspicious accidents have left the group isolated and leaderless. Is a curse burying their progress? Or is someone sabotaging their success? Find out as you assume the role of Nancy Drew and uncover the lost secrets buried within the Tomb of the Lost Queen!

“Nancy Drew: Tomb of the Lost Queen is sure to satisfy our core fans with tons of puzzles, unique challenges and a well crafted mystery in the exotic setting of Egypt,” stated Stuart Moulder, CEO, Her Interactive. “For the first time in 5 years, we have updated the user interface for our line of Nancy Drew mystery/adventure games and the results are stunning. The updated user interface combined with the enhanced graphics has resulted in our most visually appealing game to date. ”

“Nancy Drew: Tomb of the Lost Queen is an artful blend of Egyptology, mysterious secrets, captivating storytelling and a surprise ending,” said Megan Gaiser, Chief Creative Strategy Officer (CCSO), Her Interactive. “We are confident that this latest installment in our award winning adventure series will capture the interest of our longtime fans as well as new fans who appreciate a great game when they see it.”

If you take a risk that ends badly, don’t worry; you won’t have to start over. The game will automatically return players to the point before the fatal mistake. Nancy Drew: Tomb of the Lost Queen also features two difficulty settings, Amateur Sleuth and Master Sleuth, to allow players of all skill levels to solve and enjoy the mystery.

Pricing and availability:
Nancy Drew: Tomb of the Lost Queen is available now for $19.99 at www.herinteractive.com

For more information on Nancy Drew: Tomb of the Lost Queen, visit:
http://www.herinteractive.com/Mystery_Games/Nancy_Drew/Tomb_of_the_Lost_Queen/pc

To view the Nancy Drew: Tomb of the Lost Queen trailer, visit:
http://www.youtube.com/user/HerInteractiveGames?feature=watch

About Her Interactive:
Her Interactive is the leading mystery-maker and pioneer of fun and inspiring interactive entertainment. The company, with 25 awards to its name, designs, develops and publishes high-quality, mystery adventure games and apps, and is the world leader in the mystery games category. Her Interactive’s Nancy Drew games have sold more than 9 million copies. This success, in part, is buoyed by the everincreasing numbers of girls and women becoming avid game players. Nancy Drew players now include moms who have introduced their daughters to the girl detective, making her one of history’s longestrunning iconic figures spanning generations. As the number-one PC mystery franchise since 2004, unit sales of the Nancy Drew series have exceeded those of Harry Potter, Myst and Tomb Raider.

More information about the company and Nancy Drew games can be found at www.herinteractive.com. Find Her Interactive on Facebook at www.facebook.com/NancyDrewPCGames, or follow Her Interactive
on Twitter @HerInteractive.

About Nancy Drew:
Nancy Drew debuted in 1930 and is still going strong. She is a smart, independent, gutsy and resourceful teen detective who can crack even the toughest case. Published in 22 languages and with more than 100 million copies in print worldwide, Nancy Drew has engaged readers and served as a role model globally for generations.

One thought on “Press Release: Nancy Drew: Tomb of the Lost Queen”