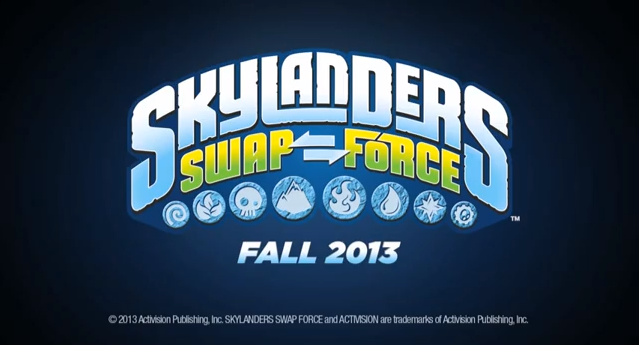 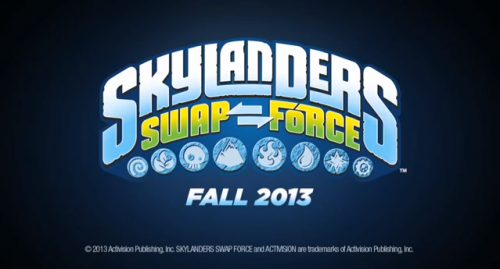 I just got this video in my e-mail about the next version of Skylanders. It is called Skylanders Swap Force and it looks fantastic. They’ve taken the Skylanders theme and added a whole new gimmick, or divided it, or multiplied it actually. Check out the video.

So it looks like if there are 256 combinations that there will be 16 new characters for this game. 16 X 16 is 256 and if my math is correct then that is the number of figures times the number of combinations of those figures or something like that. A nice thing for our wallets actually. From the video there seems to be at least 6 of the characters revealed. They are (My best guess on the elements).

I don’t know yet if previous figures will work in the game but if history is any indication they may very well work with the game. I can’t see Activision shooting itself in the foot by encouraging people to buy and collect so many Skylanders figures for Skylanders: Spyro’s Adventure and Skylanders: Giants and not be able to use them in this third incarnation.

Official Word on the Skylanders Game Facebook Page – And YES! ALL of your Skylanders will work with the new game!

I hope to learn more about this game at Toy Fair next week! I’ll definitely report it here.

Update : – After seeing Roller Brawl and Countdown I am thinking that the Swap-able Characters are more the size of giants and there will be regular sized characters as well as those two figures to not look to be swap-able.

Another Update via the Skylanders SwapForce site.
Here’s what is coming in terms of characters.
What Skylanders are in the new game?

Some great new features in SwapForce including the ability to JUMP. Check out this video of gameplay