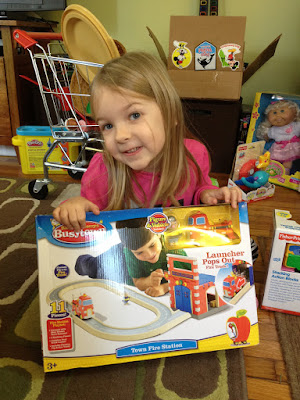 I was sent a few Busytown toys to review. If you are unfamiliar with Busytown you are missing one of my all-time childhood favorites. Richard Scarry’s Busytown is a wonderful series full of colorful characters and some very, very busy characters. When I was a kid I had some Busytown toys, too. You could build the town with interlocking green pieces that had slots where you placed hard cardboard pieces that formed the buildings. The figures were pretty good sized and there were vehicles, too. the one I really remember was Sergeant Murphy and his motorcycle with sidecar. It is nice to see that Busytown toys are out there now and Busytown is still around for kids to play with. 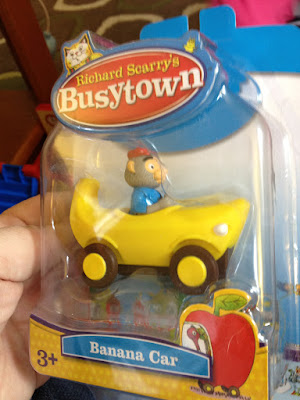 We received the Town Fire Station playset, a Banana’s Gorilla Banana car, a stuffed Hilda Hippo and a stuffed Lowly the Worm with a DVD of some Busytown Mysteries episodes. We had never watched Busytown Mysteries before but I think that Eva would enjoy the show. She’s really liked many of the toys and games that I’ve enjoyed from my childhood. 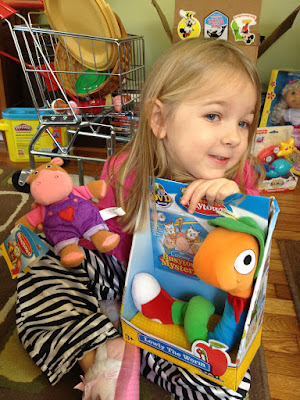 We put together the Town Fire Station first and it went together very easily. The fire station has a launcher for the fire truck. It also has a roof that splits and flips over to become steps. The launcher is rather weak because it did not move the doors of the fire station. We tried it a few times and eventually it did move the doors open and maybe went an inch past the doors. I wasn’t too impressed with that but it was still fun to play with. I just don’t see the launcher as necessary or useful. There was also a Fireman Pig that came with the set too and the pig fits into the fire truck, only after the truck comes out of the firehouse. We opened the Banana’s Banana car too and it fit the track well. Bananas the Gorilla is in the car, he does not come out. There are 2.5 inch characters that are sold separately though and I think that a character built into a vehicle on these tracks is much better than having a removable character. 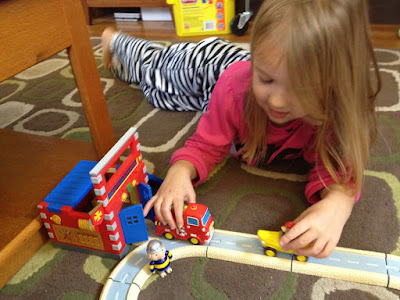 The plush characters were very cute and super detailed. I love that Lowly is able to be posed. It has his signature single red sneaker and greet cap. It is very adorable and I bet that Eva will eventually make this one of the stuffed animals that she will take to sleep with her. We’ll watch the show together and I bet that she’ll be playing with the toys all the time and want to play the Busytown board game that she got as a birthday gift.

Disclosure: We received these Busytown toys to review. The opinions about the toys are 100% our own.