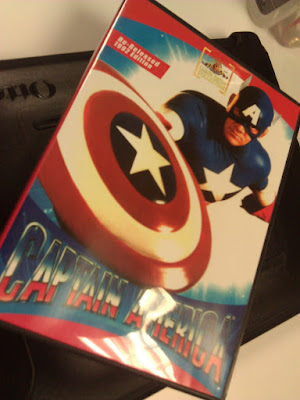 Did you know that before this Summer’s blockbuster Captain America: The First Avenger there was another Captain America movie? I certainly didn’t but when I was given the opportunity to watch the 1990 movie the comic book geek in my said, yes please!

Here is the trailer.

My impression of the movie

While the movie starts a little like the movie that came out this year in that a boy is given the super soldier serum treatment (they don’t call it that here though). The process takes place in a secret facility that is infiltrated by a member of the Red Skull’s army. A defector doctor is the one who does the process and who ultimately dies by the hand of the infiltrator. Then it is up to Steve Rogers to take on the Nazis all by himself because the whole process to become a Super Soldier died with the doctor.

The movie was very dark. And by dark I mean shot practically in the dark. This was probably out of necessity because of the special effects and costumes. The story gets right into the action with very little character development. Steve looks like a typical all american guy however he must have had polio or something because he walked strangely before his super soldier treatment. With special effects being what they were in the 90’s there wasn’t any CGI or anything like that. However there was a fairly good story that followed the life of Captain America from his start to his rebirth after being thawed from the ice.

I’m very surprised that when I was in High School in 1990 I was not aware of this movie. I would have thought it was something that I would have seen. I don’t remember hearing about this movie at all. Watching it now, the movie feels very much like one that was made in the 80’s and not the 90’s. When I look at the movies that came out in the same year and I see many that had much better special effects. It felt more like a made for TV movie that would have been in theaters. The music was B role as well. However, if you enjoy comic book movies even those that don’t quite hit the mark you might enjoy this one.

I did some research on the movie on IMDB and there are some very interesting bits of trivia that go along with this movie. It was never released in the US until recently, like this year because of Captain America: the First Avenger. Director Albert Pyun toured the country with his director’s cut. Again I didn’t hear about this movie getting a theatrical release but I did hear about the DVD release. It wasn’t the best movie out there but wasn’t the worst either. It would have been great in the 70’s because that was the feel I got from the movie or the early 80’s but certainly no the early 90’s.

The movie is now available for the first time on DVD. It can be obtained through MGM’s Manufacturing on demand.

Here is the official Press Release regarding Captain America.

LOS ANGELES (June 16, 2011) – Twentieth Century Fox Home Entertainment’s “manufacturing on demand” (“MOD”) program is excited to announce its newest addition, CAPTAIN AMERICA, available on DVD as part of MGM’s Limited Edition Collection. Based on the bestselling Marvel Comics series, CAPTAIN AMERICA stars Matt Salinger (What Dreams May Come) as a crime-fighting superhero whose strengths and abilities may save the United States from nuclear destruction.

During World War II, a brave American soldier (Salinger) volunteers to undergo experiments to become a new super-soldier, codenamed “Captain America.” Infiltrating Germany to sabotage Nazi rockets pointed at the U.S., Captain America faces off with Nazi superhuman warrior Red Skull (Scott Paulin, The Right Stuff) who defeats the hero, throwing him into suspended animation. Frozen for 50 years, Captain America is found and revived only to find that Red Skull has changed identities and has targeted the President of the United States (Ronny Cox, RoboCop) for assassination. With America on the verge of utter chaos, it is up to one man to save the day!

Disclosure: I was provided with a copy of the movie for the review. The opinions about the movie are 100% mine.