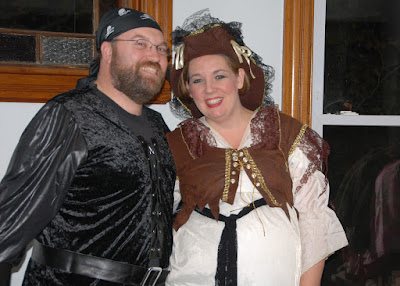 Almost a couple of weeks ago I was offered the opportunity to try out some pirate costumes to celebrate the release of PIRATES OF THE CARIBBEAN: ON STRANGER TIDES Available on Blu-ray 3D & Blu-ray Hi-Def Combo Pack! I jokingly asked my contact if they had a “pregnant serving wench” costume. And you know what, they did. Actually it is a Mommy to be Pirate costume. There was a fun, all black pirate costume for me and an adorable little buccaneer costume for Eva. While these were not costumes that looked like those from the characters of the movie they were actually pretty nice. 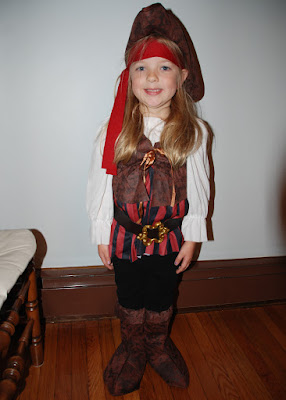 Putting on the costumes for our Pirate Pizza Party last night made me really sad that we did not go to Disney this year for Mickey’s Not So Scary Halloween. We really looked good all together in our costumes and I felt a little more confident in my pirate costume than I did in a Peter Pan one. Eva was calling herself Izzy from Jake and the Never Land Pirates all night and would have carried that over to a trip. But the costumes did make me really wish that we were in Disney and going on the Pirates of the Caribbean ride together. Maybe next year. We’ll see. 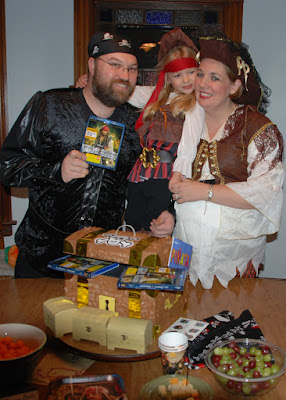 But we did have fun in our costumes at our party and I embellished mine a bit and bought a foam Pirate cutlass the other day. I’ll definitely use mine again, maybe on that Disney trip in the future. I kept having the thought of Allison going into labor last night while wearing her pirate costume and me in mine. That thought made me laugh a little throughout the night. Oh what a story that would have been.

Someone Has to Jump

Disclosure: We were sent pirate themed costumes to wear and blog about. The opinions about them, the pirates of the Caribbean movies and fictional pirates all together are 100% our own.