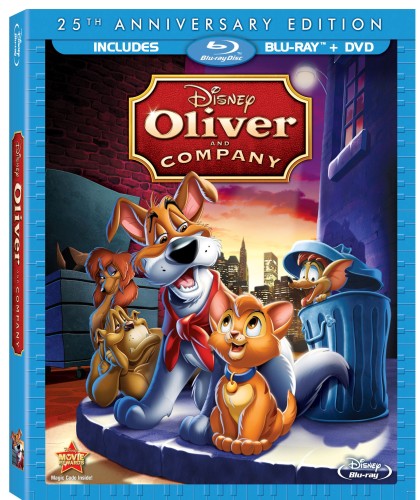 We received a copy of the 25th Anniversary Blu-ray/DVD Combo Pack of Oliver and Company, which comes out August 6, so that we could watch it and review it. Opinions are 100% our own.

Disney dips into the classics with this re-imagined tale of Oliver Twist the orphan who became a street thief and ultimately finds a home. In this tale Oliver is a little kitten played by Joey Lawrence, Joseph now. The Artful Dodger is now a carefree dog played by Billy Joel and so there is going to be plenty of music. Billy Joel wasn’t alone in the musical portion of the movie because there were songs by Bette Midler and Huey Lewis as well.

The animation is good and the story is full of music. It was actually the first Disney musical (3 or more songs in the movie) since the Fox & the Hound. The kids enjoyed the movie but were scared of the parts with the character Sykes. That makes sense in that he was an evil character in the original story. However, he gets his later in the movie.

Eva’s favorite part was the party at the end. She does love a happy resolution to a story. We discussed the movie together at dinner and explained to her that our cat Oliver actuaklly got his name from Oliver Twist because Allison was an English major and when we were looking for names for our cats we were thumbing through a book of classics.

Here is an official synopsis of the movie and details on the Blu-ray/DVD.

Synopsis: Celebrate the 25th anniversary of a Disney classic with the stunning Blu-ray debut of Oliver And Company, featuring perfect picture and sound. Relive this charming animated adventure, packed with excitement, fun and unforgettable songs by Billy Joel, Bette Midler and Huey Lewis.

In the heart of New York City, Oliver, a mischievous orphaned kitten, is befriended by Dodger, a carefree pooch and his ragtag family of misfit mutts. Life gets even better for Oliver when he is adopted by a lonely little girl named Jenny. But when tough guy Sykes and his Doberman sidekicks try to keep Jenny and Oliver apart, the spirited kitten and his newfound friends discover the meaning of courage and find a home where they truly belong.

Writer: Jim Cox (Fern Gully: The Last Rainforest, The Rescuers Down Under)