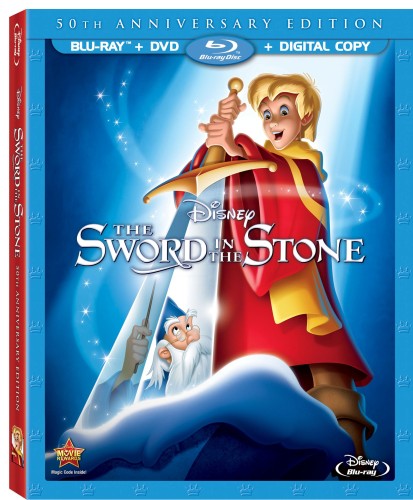 I am a huge fan of Arthurian Legend and when I was given the chance to watch and review one of my favorite childhood movies I jumped at the chance. The opinions expressed are 100% my own.

I have a collection of about 30 or so books about King Arthur including T. H. White’s The Once and Future King which was the source material for the Sword in the Stone. The Sword in the Stone was actually book one of White’s series of four novels. In that novel as well as in this movie we are introduced to Arthur, who goes by “Wart” a small boy who is being raised by Sir Ector and who is foster-brother to Sir Kay. Wart is destined to become King Arthur and Merlin the wizard teaches him many lessons that he will need to become a great and just King.

The other day I watched this movie with Andrew. He was pretty into it, too.

It was fun to see the movie again after so many years. The animation on Blu-ray was crisp and clear and the storyline fun and entertaining. Seeing Wart come into his own after learning so many lessons from Merlin was, if you mind the pun, uplifting. What I’ve always loved about the story of King Arthur is that he rises up from obscurity to become a great leader after learning what a great leader should be through Merlin’s tutelage. This movie tells us that story of how he becomes that leader through learning about scientific principles, compassion and using brains over brawn. I love watching it and am happy to see it out on Blu-ray.

Synopsis: Disney proudly presents the 50th anniversary edition of a spellbinding and beloved animated classic. Conjure up magical family fun with the humor, adventure and Academy Award®-nominated music (Best Score – Adaptation or Treatment, 1963) of The Sword In The Stone – now on Blu-ray Combo Pack for the first time ever!

Take an amazing journey with a young orphan named “Wart” and the extraordinary wizard Merlin. According to legend, only someone with the purest character and inner strength can pull the enchanted sword from the stone and claim the throne of England. Armed with new found confidence and the power of friendship, Wart discovers his destiny and learns the best magic is the kind you find inside yourself!

Voice Cast: Sebastian Cabot (The Jungle Book, The Many Adventures of Winnie the Pooh) as Sir Ector, Karl Swenson (The Birds, Judgment at Nuremberg) as Merlin, Rickie Sorensen (Tarzan and the Trappers, Tarzan’s Fight for Life) as Wart, Junius Matthews (The Many Adventures of Winnie the Pooh, Winnie the Pooh and Tigger Too) as Archimedes, Martha Wentworth (101 Dalmatians, The Stranger) as Madam Mim, Norman Alden (The Transformers: The Movie, Back to the Future) as Sir Kay, and Alan Napier (Marnie, Batman) as Sir Pellinor

Bonus Features: New Alternative Opening: Where Wart Meets Merlin plus all the original Classic DVD Release Bonus Features including Music and Magic: The Sherman Brothers, Sing-along with The Movie, All About Magic (excerpt), A Knight for a Day & Brave Little Tailor