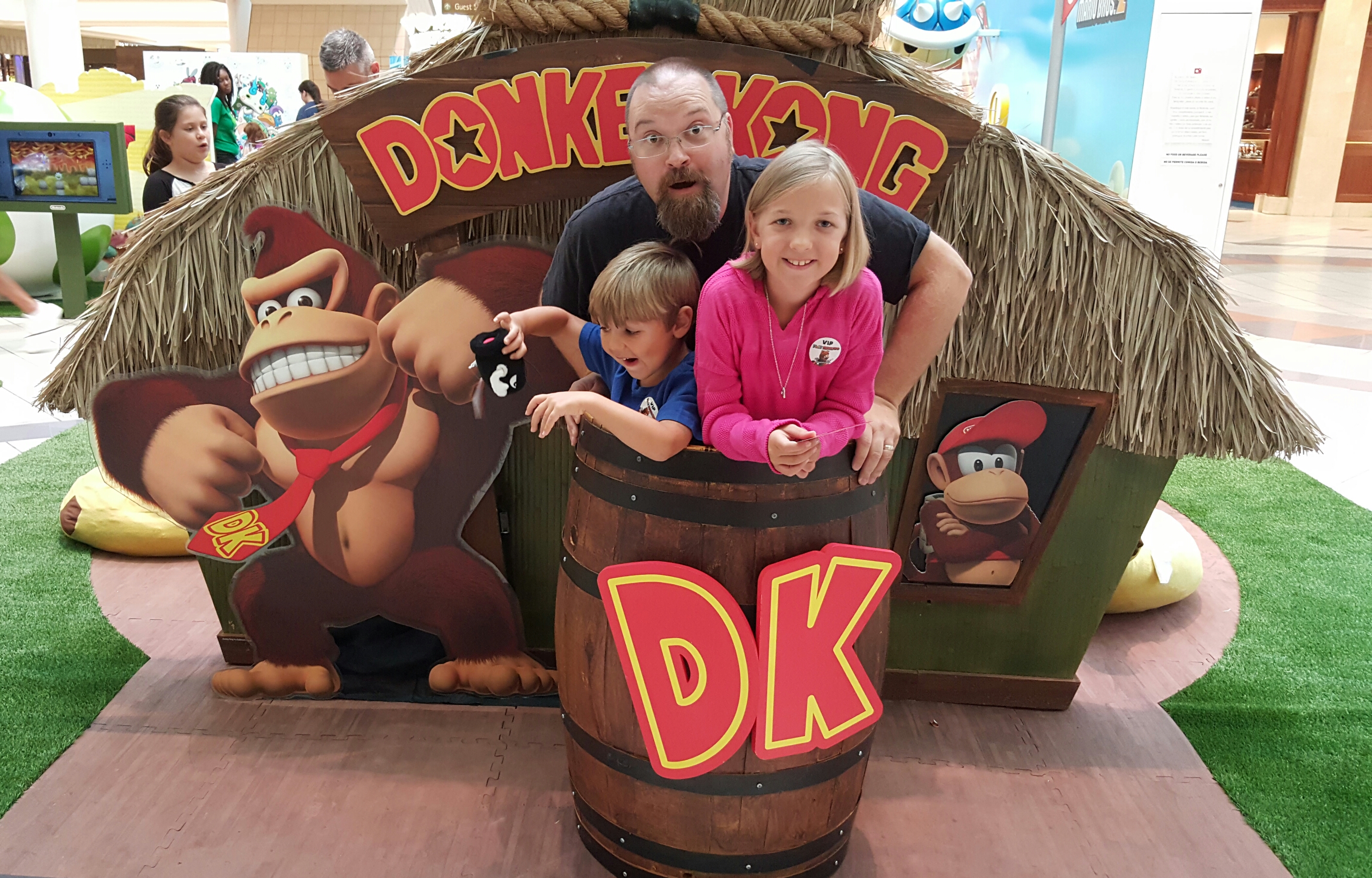 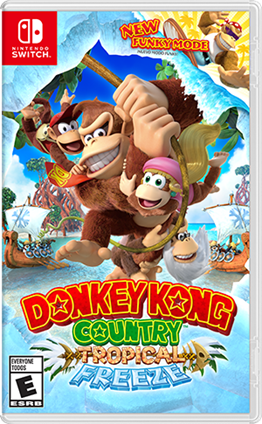 The photo above is from almost exactly two years ago. The whole family went to a special Nintendo 3DS night. While we were there I won a New 3DS XL and a bunch of games. One of the games was Donkey Kong Country. Well, a couple of weeks ago I was sent a copy of Donkey Kong Country Tropical Freeze for the Nintendo Switch by Nintendo . They sent us a free copy to play with and review. Here is what we thought. 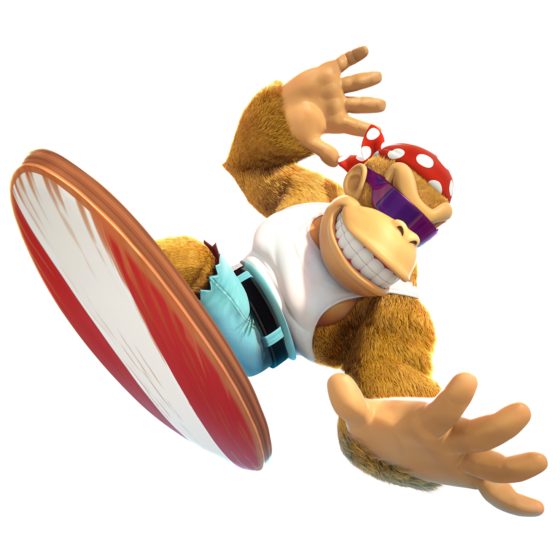 The first time I played Donkey Kong Country Tropical Freeze on the Nintendo switch I played in Funky Mode with Funky Kong. This is a character playable in this version of the game. He’s has not been a playable character in a main Donkey Kong Country game before and he’s a fun character to use. Funky Kong as a playable character was introduced to make the game more accessible and a bit easier for the causal player. He is pretty overpowered in that he doesn’t get hurt by spikes, he can double jump and he can breath underwater indefinitely. So, he was a great character to try out right away because I was able to learn all the moves of the game and get comfortable before playing with a character like Donkey Kong who only has 2 hearts and cannot do all that Funky can do, without help. You can see a bit about the storyline and some gameplay int he trailer below.

The basic storyline of this Dnkey Kong country game is that Arctic invaders have turned Donkey Kong Island into their personal frozen fortress, and it’s up to you to save the day. Play as Donkey Kong in Original Mode and team up with Diddy Kong, Dixie Kong, and Cranky Kong—each with unique abilities—to overcome platforming challenges and frosty foes. Traverse islands packed with platforming perfection and nonstop action as the classic Kongs in the original game, or mix things up by playing the story as Funky Kong in new Funky Mode! 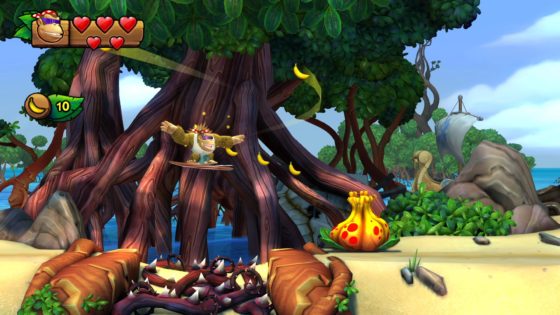 The opening sequence is cute and the boss characters are funny, plus that army of penguins continues to have a bunch of silliness up their sleeves. I like the one that shoots fish like arrows. It is a colorful and fast paced game with tons of extra spots to get bonus coins and bananas. I’m no fan of that fruit but in this game I make sure not to miss a single one. Or, at least I try not to miss them because they can be worth extra lives. 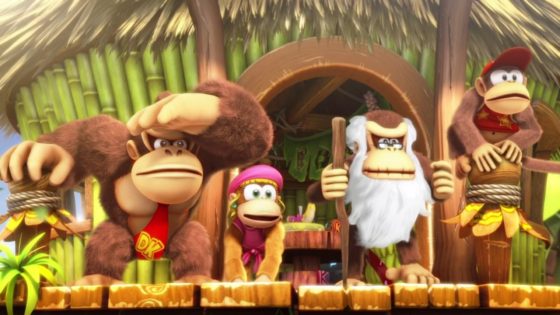 You can play the game in single player or two-player modes. I played a few times with Andrew and when I had to stop because I had to head to sleep (I sleep during the day on the weekends because of work) he wanted to continue playing. This is a good sign that he has found a game that he enjoys. I had him play as Funky Kong because, as I said earlier, he is a much more forgiving character. Original mode is more challenging because you need to team up with Diddy, Dixie and Cranky to be able to do all that Funky can do, plus working with those characters increases the amount of hearts that you have. 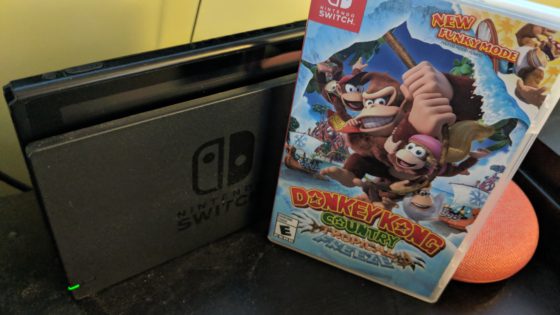 This is a great game with a ton of replay appeal. A great look and also so much color and humor. It is challenging enough for seasoned gamers like myself and newer gamers like Andrew. You can learn more about Donkey Kong Country: Tropical Freeze on the official website at donkeykong.nintendo.com/tropical-freeze/. 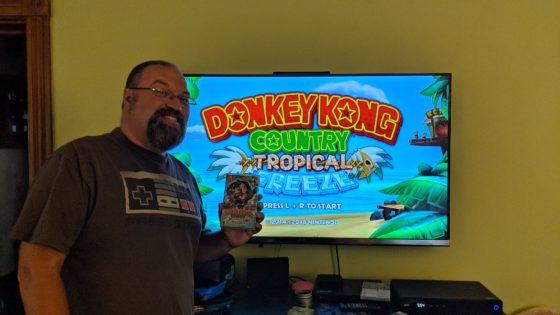