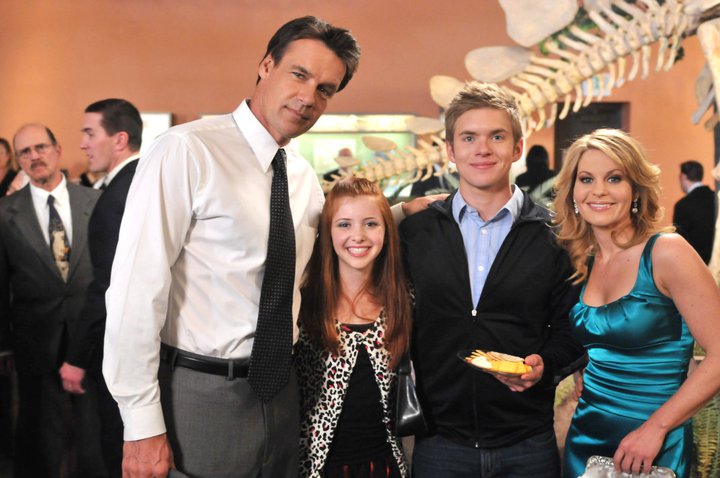 Last Tuesday night I had the opportunity to watch a private in home screening of the upcoming Fox Family Movie: Truth Be Told. The movie starts Candace Cameron Bure and David James Elliott. The premiere of “Truth Be Told” is on Saturday, April 16th on FOX at 8pm/7ct. Here is a quick synopsis of the movie from the official Truth Be Told site.

When leading marriage counselor Annie Morgan (Candace Cameron Bure) is offered an opportunity to host a relationship talk show, she jumps at the chance. But fearful that being single might ruin her big break, she conspires with an old college friend and recent widower, Mark Crane (David James Elliott), to pose as a married couple with kids. Their story starts to unravel when Annie and Mark join her eccentric soon-to-be boss (Ronny Cox) for a weekend at his ranch in New Mexico. Comical misunderstandings mark the event as Annie struggles to keep up the ruse, finding herself emotionally invested and conflicted by her own conscience. Will she confess the truth about her marital status and her feelings for Mark… and will the truth set them free?

so, what did I think of the movie… read more to find out.

Going into this I thought it was going to be a really sappy cheese-fest. I have been sucked in by the cheesiness of the “family movie” before and to be fair many family movies are really cheesy. I did not get that vibe from this movie at all. In fact I found the movie to be fun and moving without being overly sappy, contrived or cheesy. I enjoyed it.

When I viewed the movie the first time I was on a live chat with one of the stars, Candace Cameron Bure was in the chat room with us. She was quick to ask if anyone had any questions and answered all that we had. She gave us insight into the filming of the movie and what it was like on set. She even joked a little with everyone on the chat about Full House. We were all fans of the show from way back. I’m pretty sure I saw every episode. It was nice to have that very personal touch while watching the movie. I was as much into the chat as I was into the movie.

The movie itself is every bit a decent family movie. At the heart the movie was about how a lie can be devastating and how one lie can build upon itself and take on a life of its own. While both Annie and Mark were lying for a greater good, to ultimately be able to help more people, they were still lying. Even though we have seen these sort of scenarios play out in other movies I think that when the truth does come out, the resolution and reaction of those involved was not contrived. It felt like a real scenario. Too many times these movies with the major plot point based on characters lying becomes real slapstick but that was not the case here.

The relationships shown in this movie were also very positive. A bother and sister having a healthy relationship was nice to see. There is a moment between Annie and Mark’s daughter Zoey that had some very real dialog that I was both surprised and impressed with. I guess I was expecting something sappy in that moment but it had the feel of a conversation that two people in the situation would actually have.

This is a perfect movie for the family. There is no sex, no violence and no suggestive language and yet, it was still entertaining. I re-watched the movie this Sunday with Allison and Eva. We ate our M&Ms and Skittles from our movie kit and sat around my laptop. This time I watched the movie without doing any chatting and picked up on a few things that I missed while trying to watch and chat at the same time. The movie was still very good and it held the attention of Allison and Eva. I thought that Eva would like ti because of the ranch and the horses. I told her that the ranch was like Shadow Ranch in the Nancy Drew iPod app she is so fond of. Eva liked the horses and the ATVs. This kid likes action. She did ask us about the guns during a skeet shooting scene. We had a little discussion about that but she was fine.

We watch movies together as a family often. Since Eva is only 3 years old the movies we watch are mostly animated. We are blessed with an inquisitive little girl and so we have the opportunity to have teaching moments based on what we’ve watched. For this movie we are able to have a way to refer to lying in a way that Eva can understand. So having a discussion about the consequences of lying can be helped along with such a good example of what can happen when you lie.

I hope that if you have a family and would like to be able to sit down and watch a movie together that you consider Truth Be Told this Saturday on Fox at 8pm/7pm central. If you are an American Idol fan you might really enjoy a special guest musical performance too. I’m not going to give it away though.

Here is the movie trailer.

You can also visit the Family Move Night website where you can learn all about Truth Be Told and the other upcoming family movies. There is also a Facebook page for Family Movie Night and a Twitter Feed.

As an aside, I have to say, I am more than a little bit jealous of my friend Jennifer Leet of The Dirty Shirt. She actually got to go to New Mexico to see the movie Truth Be told being filmed. I enjoyed my IM chat with Candace Cameron and she even replied to me on Twitter but to have a chance to chat with her and David James Elliott would have been very cool. I love movies and being on a set would have been so fantastic. I was on one set once, the set of Smallville and got to watch a scene be filmed, that was pretty cool, but a movie, man that would have been fun.

Disclosure: I wrote this review while participating in a blog tour campaign by Mom Central Consulting on behalf of P&G and received a movie kit to facilitate my review and a gift code to thank me for taking the time to participate. Opinions about the movie are 100% mine. Photo From Truth Be Told Facebook Page