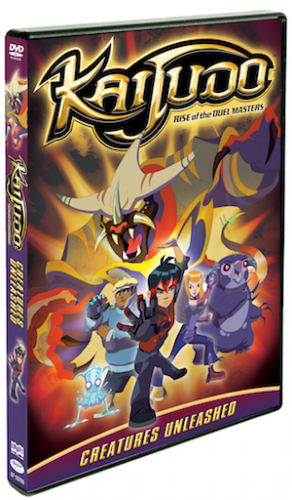 DVD comes out on December 4 but can be pre-ordered at Amazon.com.

The first episode sets up the series pretty well. We are introduced to our hero, Ray. Ray lives with his mom and grandfather. His dad is not in the picture and we’re not sure what happened to him (dead? missing?). Ray also likes to draw and he draws different sorts of creatures in amazing detail. We also learn that Ray has had some trouble with bullies.

We are also introduced to Master Chavez. While on the outside he is a popular martial arts instructor he is also a Master of Kaijudo “The Way of the Creature”. Master Chavez has been taking care of tears in “The Veil” which is a divider between worlds. Master Chavez saves Ray and his friends Allie and Gabe when Ray accidentally summons a creature to defend himself from a bully.

The episode also establishes what Ray stands for. He’s of mixed heritage and is proud of who he is, he tries to avoid bullies but is at the end of his rope with them. He also is quick to defend his friends and stick up for them even if this makes him more of a target for the bullies.

I wasn’t sure if I was going to like this show but it did win me over a bit. There was an actual story, a bit of mystery and the good voice actors. I have a few clips to share with you as well as some character bios and images and a press release.

Most residents of San Campion know Hector Chavez as a martial arts instructor at the local dojo. Ray, Allie, and Gabe now know the truth: Master Chavez is a Duel Master, preserving the Veil and protecting earth. Master Chavez tracks down creatures who accidentally wander through breaches in the Veil, sending them back to their own realm and sealing the breach. He trains constantly with Gilaflame the Assaulter, his drakon dueling creature. Together, they can take on creatures much larger and more powerful than themselves.

Fourteen-year-old Raiden Pierce-Okamoto (everyone calls him Ray) knows that he has a connection to something beyond the world he can see. He dreams of powerful creatures from a very different land . . . and then one day, Ray accidently summons a creature to defend himself against a bully. 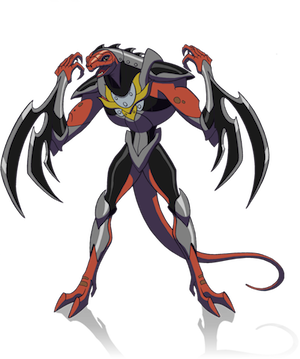 Gilaflame is ten-foot-tall, armored reptilian drakon. Possessing extraordinary speed and armed with razor-sharp blades, Gilaflame’s attacks are precise and devastating. However, when summoned into combat by Master Chavez, Gilaflame is even more deadly. Chavez has trained it to not only slash with the blades, but also to throw sparks from them, lighting fires to trap and confuse enemies. 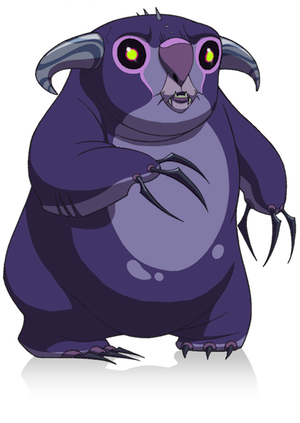 Squeaky is the prime example of the saying “Looks can be deceiving.” Squeaky may look like a cuddly koala bear on the outside, but in battle she quickly becomes a force to be reckoned with, especially with Allie by her side. Even though she stands at a little over six feet tall, Squeaky is considered a toy-poodle in the Creature world. She is fiercely loyal and is both dependent on and protective of Allie. Hailing from the Darkness Civilization, Squeaky is not only Scaradorable, but has sonic attacks, fear bats, formidable claws and a piercing scream attack – the reason Allie nicknames her Squeaky. If you push her hard enough, watch out! 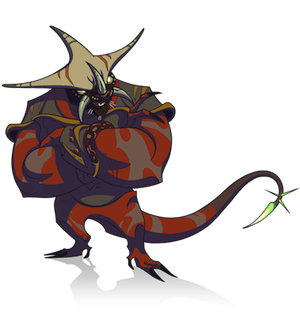 You want Tatsurion the Unchained at your side in battle! Whether your enemies are up close or at long range, Tatsurion can deal with them. This Armored Dragon/Beast Kin hybrid can pummel foes up close with horns and claws or use his wrist-mounted rocket launchers, chain whips, and a high-power, shoulder-mounted howitzer to take down opponents at long range.

OWN THIS COLLECTIBLE DVD DECEMBER 4, 2012 FROM SHOUT! FACTORY

This holiday season, kids and families are invited on a wondrous journey into the imaginative world of KAIJUDO: RISE OF THE DUEL MASTERS™, a current animated hit series produced by Hasbro Studios and Wizards of the Coast. Featuring the voice talent of popular actors Scott Wolf, Freddy Rodriguez, John DiMaggio, Oded Fehr, Phil LaMarr, David Sobolov, Kari Wahlgren and Jason Marsden, this popular action-fantasy series offers an inspiring story about a young hero,Ray, who possesses the rare ability to befriend and duel alongside fantastical creatures from a parallel dimension. It’s up to Ray to master the ancient art of KAIJUDO in order to protect both worlds. Moreover, this adventure-filled series highlights the tales of friendship, loyalty and determination, and further addresses the show’s central theme of anti-bullying.

On December 4, 2012, the whole family will be highly entertained by the exciting storytelling, incredible action and awesome creature combats when KAIJUDO: RISE OF THE DUEL MASTERS™ – CREATURES UNLEASHED DVD hits store shelves in the U.S and Canada from Shout! Factory, in collaboration with Hasbro Studios and Wizards of the Coast. Featuring five adventurous episodes, an exclusive alternative art “Kenina” playable trading card, and special bonus feature A Look at KAIJUDO: Rise of the Duel Masters, this DVD is priced to own with a suggested retail price of $14.97.

Synopsis
Ray, a 14-year-old who lives with his mom and grandfather, has been recruited by the Duel Masters to study KAIJUDO – “The Way of the Creature.” They chose Ray for his natural talent as a creature tamer and duelist. Along with pals Allie and Gabe, Ray learns to work with the magical creatures… in their world. Each duel he fights yields new experience and allies in both worlds. The Veil, which has divided the two worlds for a thousand years, is crumbling. Hope lies with those who can masters the art of KAIJUDO.

About Hasbro
Hasbro, Inc. (NASDAQ: HAS) is a branded play company providing children and families around the world with a wide-range of immersive entertainment offerings based on the Company’s world class brand portfolio. From toys and games, to television programming, motion pictures, digital gaming and a comprehensive licensing program, Hasbro strives to delight its global customers with innovative, well-known and beloved brands such as TRANSFORMERS, LITTLEST PET SHOP, NERF, PLAYSKOOL, MY LITTLE PONY, G.I. JOE, MAGIC: THE GATHERING and MONOPOLY. The Company’s Hasbro Studios develops and produces television programming for markets around the world. Programming in the U.S. is distributed on The Hub TV Network, a multi-platform joint venture between Hasbro and Discovery Communications (NASDAQ: DISCA, DISCB, DISCK). Through the Company’s deep commitment to corporate social responsibility, including philanthropy, Hasbro is helping to build a safe and sustainable world for future generations and to positively impact the lives of millions of children and families every year. It has been recognized for its efforts by being named one of the “World’s Most Ethical Companies” and is ranked as one of Corporate Responsibility Magazine’s “100 Best Corporate Citizens.” Learn more at www.hasbro.com. © 2012 Hasbro, Inc. All Rights Reserved.