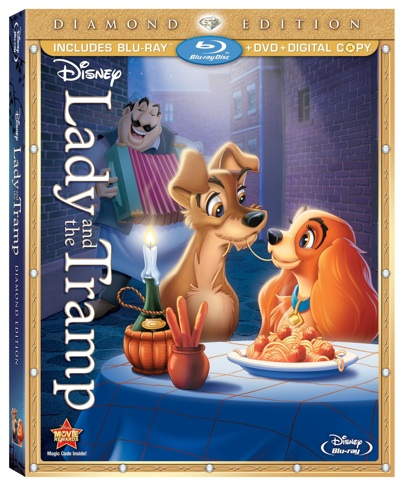 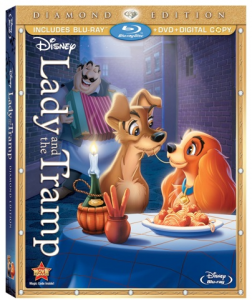 Today Allison, Eva and I watched Lady and The Tramp on Blu-ray. We have watched the movie before as a family. that was when Eva was a three year old. She didn’t quite remember it but enjoyed watching it today. This was the first time that we tried a Blu-ray and a Second Screen app on the iPad. I wasn’t able to get it to work very well because we were chomping away on popcorn so the audio sync didn’t well and I couldn’t get BD Live to work either. However, once we were done with the movie I saw on the Bonus Features the option to sync with Second Screen. I wish I explored that first. But now I at least know how to do it for future movies.

We weren’t totally without use of Second Screen. You can use Second Screen manually and it was pretty fun playing with that app. There were options to play with flip books, color in characters and learn more about how the movie was made.

The movie is an impressive one especially when you realize that the characters were hand drawn. I enjoyed learning about how the animators studied dogs for the movie and how they developed the voices and character designs. The movie is truly a Disney classic that we are happy to have in our collection. You can get it for your own collection tomorrow February 7, 2012.

I have a few clips from the movie as well as the official Press Release below.

LADY AND THE TRAMP DIAMOND EDITION – BEHIND THE SCENES PHOTOS WITH PEGGY LEE, WALT DISNEY, ANIMATORS AND PRODUCTION TEAM

“One of the great classics…more glorious than ever in dazzling Disney Blu-ray High Definition!”

LADY AND THE TRAMP: DIAMOND EDITION

Synopsis: A classic love story unfolds in the best Disney tradition as a lovely young pedigreed cocker spaniel named Lady, who lives a pampered life, finds herself falling romantically for Tramp, an amorous street-smart pooch without prospects. Although they have fun together on several dates, including a sentimental spaghetti dinner by moonlight at Tony’s restaurant, their relationship is strained not only by Lady’s loyalty to her human family and their newborn baby, but by Tramp’s devil-may-care attitude that eventually gets Lady in trouble and tossed into the dog pound. However, good-hearted Tramp redeems himself by saving the baby from potential harm and thus wins Lady’s love and the affection of her human family.

Share this timeless Disney Classic with your family as Walt Disney’s beloved classic, Lady and the Tramp, finally releases from the Disney Vault for the first time ever on Blu-ray. This heartwarming tale now charms a new generation of families and fans with its exquisite animation and unforgettable songs in one of the greatest love stories of all time. Featuring high definition sound and immersive bonus features your family can enjoy together, Lady and the Tramp Diamond Edition is a must own addition to your Disney collection.

One thought on “Review: Lady and the Tramp DVD & Blu-ray”