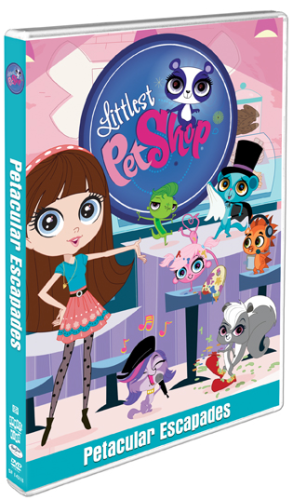 We received a copy of the latest Littlest Pet Shop DVD compilation to watch and review. Opinions are 100% our own.

The Littlest Pet Shop is one of those shows that Eva will watch when it is on. She always enjoys it but it is not on our DVR rotation for recording (Which is good because it is new season time and Momma and Dada have their shows to watch). So, it is good that we were able to get a copy of this DVD so Eva could catch up on the episodes from the show.

While the show does not have the same following of a My Little Pony it is still smartly written and many of the characters are voiced by the same cast as MLP so there is some crossover in audience. The show itself is cute and has some funny moments that even parents will get. Blythe is a good character, she’s smart, funny and does her own thing even when bullies try and keep her down. It is good to see some stronger female characters in programs.

The stars are really the pets in the pet shop, they all have their own personalities and they can talk with Blythe, who can understand them. She and the pets get into all sorts of adventures. Five of those adventures are on this DVD.

Blythe and her best friends — Zoe the spaniel, Pepper the skunk, Sunil the mongoose, Russell the hedgehog, Penny the panda, Vinnie the gecko and Minka the monkey — are back for five more exciting adventures in the Littlest Pet Shop! On October 1, 2013, Shout! Factory Kids, in collaboration with Hasbro Studios, will release Littlest Pet Shop: Petacular Escapades on DVD. This collection features encounters with legendary parrots, movie stars and Blythe’s sudden inability to understand the pets! All of these adventures and more happen in these petacular episodes of The Littlest Pet Shop!

About Hasbro Studios
Hasbro Studios is the Los Angeles-based entertainment division of Hasbro, Inc. (NASDAQ: HAS). The studio is responsible for entertainment brand-driven storytelling for the company across television, film, commercial productions and short-form. It develops, produces and distributes TV shows based on Hasbro’s world class brands, including TRANSFORMERS, MY LITTLE PONY, LITTLEST PET SHOP and FAMILY GAME NIGHT. Many of these shows air on Hub Network, a U.S. television network for kids and their families, that is a joint venture between Hasbro and Discovery Communications (NASDAQ: DISCA, DISCB, DISCK). Hasbro Studios shows can also be seen on networks in more than 170 countries globally. Since its formation in 2009, the studio has received seven Daytime Emmy wins and 16 nominations. On the film side, the studio is developing and producing a number of features based on Hasbro’s brands, including TRANSFORMERS 4 (Paramount), STRETCH ARMSTRONG (Relativity Media) and CANDY LAND (Sony). The studio team also oversees the production of commercials that feature Hasbro’s brands as well production of short-form content that can be seen on all of the major digital and social media platforms globally.