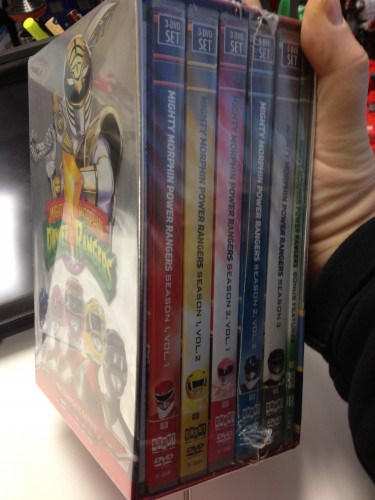 I was too old to have ever gotten into the Mighty Morphin Power Rangers TV show. It debuted in 1993 and there has been a Power Rangers series out ever since. Shout Factory with Saban Brands, LLC have gathered the complete first season into a 19 DVD Box Set. That is 145 episodes from the series plus the Ten Episode Alien Rangers miniseries and two additional discs full of bonus content. The bonus content even includes rare archival material and there are some brand new retrospective featurettes. Here is what can be found in the bonus content.

What I remember of the series was that the Pink Ranger, Amy Jo Johnson was from Cape Cod and we lived on the Cape in the summer and then she was on the TV show Felicity and once there was a reference to the Pink Power Ranger on a Halloween episode. Other than that I remember kids playing Power Rangers on the beach and the theme song because it was everywhere. Power Rangers were everywhere you looked and kids must have loved it. Well, this first series is now ready to be picked up in stores on Tuesday November 20, 2012 and can also be pre-ordered on Amazon.com through this link Mighty Morphin Power Rangers: The Complete Series