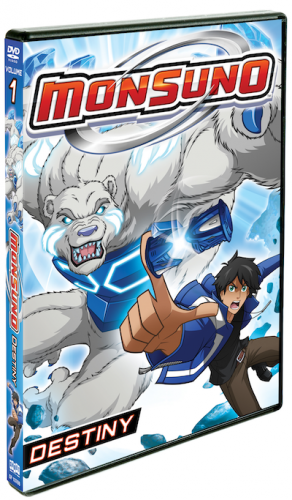 I tried to watch this DVD but could not get into the show. A month or so ago I watched a DVD for another game based show called Kaijudo where a kid becomes part of this unknown world of monsters what fight each other at our behest. I thought that was fairly well done and had decent animation as well as voice work. I did not think the same about Monsuno. I tried, I really did but this is just not for me. I’m sure that some of you have kids who are into this show or these toys so you might be excited that you can buy the DVD that was released on January 8th. Me, not so much. See for yourself with these few clips and you can learn more about the show from the Press release below.

The Race to Harness the Power of Monsuno!

On January 8, 2013, Shout! Factory Kids, in collaboration with FremantleMedia Enterprises (FME), the brand extension and licensing arm of FremantleMedia, will release MONSUNO: DESTINY, the first DVD collection based on the highly popular animated series on Nicktoons! Delivering five action-filled episodes and captivating entertainment that kids and families are sure to enjoy, the DVD features bonus content including Behind-The-Scenes Videos and Character Bios, and has a suggested retail price of $14.97.

The MONSUNO series is an epic boys action adventure series where kids discover, command and battle creatures with tremendous destructive potential. When a race to harness the power of Monsuno ensues between a group of everyday kids and the evil forces focused on destroying the Earth, our heroes spring into action to defend the planet. Built around powerful, action-driven animation, dynamic characters and a deeply woven original story mythology, MONSUNO provides a completely original entertainment experience.

MONSUNO: Destiny
They hurled through space eons before man existed. They burned through the planet’s atmosphere and crashed into four corners of the world, bringing chaos, destruction and the extinction of the dinosaurs. And then, as suddenly as they appeared…they vanished.

Now, the Monsuno are BACK! And their rise will either spell the ultimate destruction of our planet or launch the courageous adventure of mankind’s newest hero, the unpredictable teenager, Chase Suno!

Disclosure: I received a copy of this DVD to watch and review. Opinions are 100% my own.