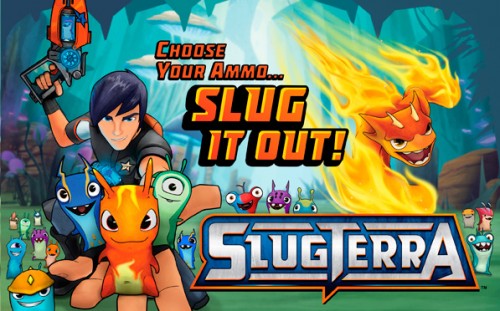 I received a copy of the new DVD Slugterra: Return of the Shane Gang to review. It is from Shout Factory Kids and includes five episodes from the Disney XD show Slugterra. I had never seen the show nor heard of it before and to look at the DVD cover I was not exactly expecting much. I tend to believe that many of these shows are all the same without giving them much of a chance. But, in the case of Slugterra I did give it a chance and watched all five episodes in a sitting. The first episode hooked me in almost immediately and the second solidified that interest.

Slugterra is set in the world of Slugterra which is actually below the Earth, 100 miles below. It has a high tech/old west feel to it where SlugSlingers either cause trouble or keep the peace. Keeping the peace was the job of Will Shane until Dr. Blakk blasted him (We don’t know what happened to him). This occurs within the first few minutes of the first episode. Will’s prized slug, Burpy, heads to the surface to give Shane’s son, Eli, a letter. Eli is a young boy and his father explains in the letter that Eli can go to Slugterra when he reaches 15 years old. Apparently this kid has no mom because the minute he turns 15 he just up and heads down to Slugterra. This is where the story really gets going.

Eli meets Pronto, who is a tracker and a bit of a rogue. Pronto is a molenoid and molenoids have a built in magnetic compass, that is why they can track anything. Pronto is the comic relief character that you don’t completely trust. He’ll probably double cross Eli at some point and redeem himself in the end.

Eli then meets Trixie and Kord at the Duel. Trixie looks to be a human girl but has lived in Slugterra her whole life. The people of Slugterra do not know about the surface world and Eli must keep the knowledge of where he comes from a secret. Trixie knows everything there is to know about slugs as well as the other slugslingers. She records the duels and helps Eli learn the strengths and weaknesses of the slugs and slingers.

Kord is a cave troll who is an amazing engineer. He keeps the team’s gear upgraded and in working order. This includes their blasters as well as their Mechas. Mechas are the mode of transportation for slugslingers. They look like animals but are mechanical and sort of have a motorcycle vibe to them also. Think of mechas as horses and slugslingers as gunslingers of the Old West.

With the team assembled Eli must now assemble his arsenal. The secondary cast of characters are the slugs themselves. Slugs are living ammunition for the blasters. When a slug is loaded into a blaster they are in their dormant or protoform. When they are fired from the blaster and reach 100 miles an hour they transform and can do amazing things like breath fire, freeze opponents, ram things and electrify things. Will Shane explained to his son how the slugs are the key to slugterra. Not just by being ammunition but also because of the ecosystem of the world. This is why Eli knows that he has to bond with his slugs and protect them. Eli names his slugs and cares for them especially his Dad’s prized slug, Burpy, one of the rarest species of slug.

There wouldn’t be much of a story without a bad guy and in this story the bad guy is Dr. Blakk. Dr. Blakk is a sinister individual who experiments on the slugs and turns them into ghoulish hyperpowered versions of their otherwise docile selves. Dr. Blakk corrupts many of the slugslingers with this new ammo which upsets the balance of power in the world. It may also very well upset the ecosystem. It is up to Eli and the new Shane gang to stop Dr. Blakk and his ghouls.

So, I watched the whole DVD one night and then the other day I showed an episode to my daughter, Eva and she loved it too. She loved the character or Trixie and after the episode she went and grabbed some water guns to act as our blasters so we could play Slugterra. Here are some clips and the official word on the show.

Disclosure: I received the copy of this DVD to watch and review. Opinions are 100% my own.