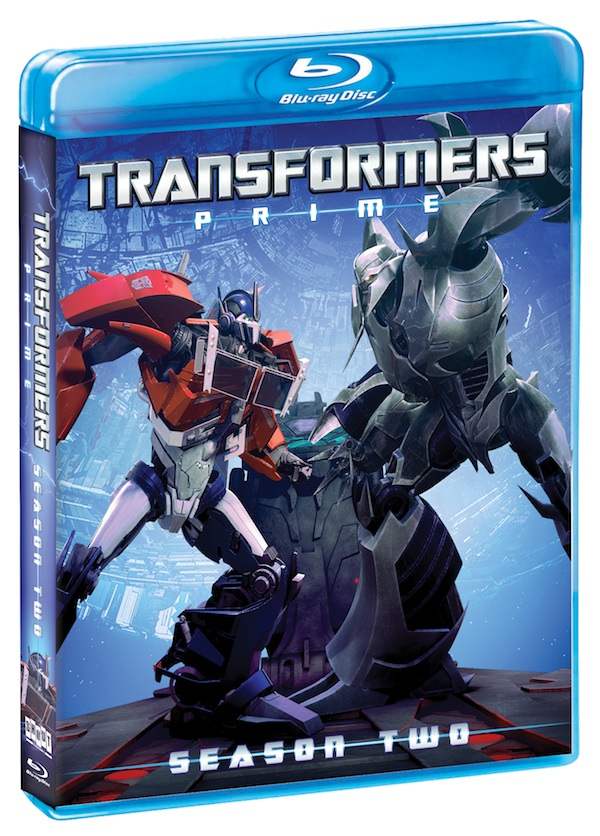 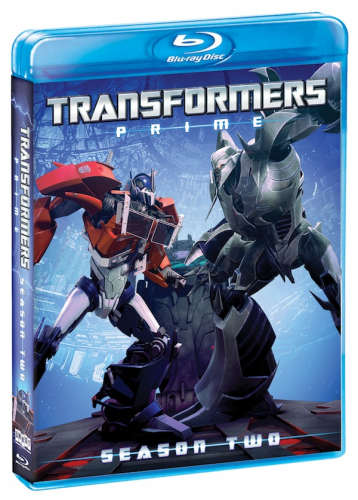 In the second season of Transformers Prime we pick up right where we left off at the end of Season one. Optimus has defeated Unicron but at the cost of his own memories. Optimus believes that he is once again Orion Pax, a data clerk on Iacon who was friends with Megatron. Megatron take Optimus to the Nemesis and even brands him with the Decepticon insignia. The storytelling in this series is intense. As a fan from as far back as the origin of the Transformers franchise I am so pleased that this series is true to honoring the history of the series but takes great pains to update and improve upon it. There is no secret why this is an award winning series. It is smart and funny, compelling and exciting.

In season two we see the Autobots and Decepticons racing across the globe to discover ancient Iacon artifacts. These items turn out to be weapons and tools of great power and importance. they were sent to Earth by Alpha Trion so that Megatron could not get his hands on them and turn the tide on the war. Throughout the season loyalties are tested, new respect and understanding is reached, a new member of the team joins the Autobots. We see less of the humans in the series but they prove to be pivotal in the final episodes of the season. Fan favorite Wheeljack appears in multiple episodes as well and Shockwave even appears along with a flashback involving Cliffjumper (No Dwayne the Rock Johnson voice though).

Rewatching the season on Blu-Ray was incredible. The detail on all of the characters from reflections to scratches is amazing. The whole storyline coming together shows the care that was taken by the writers and producers to make this show consistent and cohesive. There are also some very informative commentaries and then an awesome bonus of Larry King interviewing Peter Cullen at San Diego Comic Con. This is an essential Blu-Ray set to have for any Transformers fan. I was amazed at how quickly it was released, too. I received my review copy the day after the last episode of season two aired. Instead of watching the two episodes that I had on the DVR I watched them on the Blu-Ray instead and that made a huge difference in quality and viewing enjoyment.

With UNICRON defeated by OPTIMUS PRIME, what was thought to be the end of AUTOBOTS’ darkest hour is actually proving to be just the beginning. The dynamic second season of Hasbro Studios’ acclaimed animated hit series TRANSFORMERS PRIME digs deeper into TRANSFORMERS mythology as both the AUTOBOTS and DECEPTICONS uncover clues relating to secret artifacts of Iacon, CYBERTRON’s capital city. Their discoveries could not only change the balance of power in the war, but also potentially revive their dead home planet. Fans of all ages can relive the thrilling adventures of TRANSFORMERS PRIME when the complete SEASON TWO debuts on home entertainment shelves nationwide in the U.S on DVD November 20, 2012 and on Blu-ray November 27, 2012 from Shout! Factory, in collaboration with Hasbro Studios.

TRANSFORMERS PRIME: SEASON TWO contains all 26 captivating episodes in perfect high-definition picture and purest digital sound available. Special bonus content highlights include OPTIMUS PRIME: Up Close and Personal Panel with Larry King and Peter Cullen from San Diego Comic-Con International 2012 and brand-new interviews with the series creative team! This is an essential home entertainment collection for every TRANSFORMERS fan, collectors and entire family. The 4-disc Blu-ray collection is priced to own at $ 59.99 SRP. The deluxe 4-DVD set is sold separately and has a suggested retail price of $29.93 SRP. Pre-order available now at Amazon.com or ShoutFactory.com

About Hasbro
Hasbro, Inc. (NASDAQ: HAS) is a branded play company providing children and families around the world with a wide-range of immersive entertainment offerings based on the Company’s world class brand portfolio. From toys and games, to television programming, motion pictures, digital gaming and a comprehensive licensing program, Hasbro strives to delight its global customers with innovative, well-known and beloved brands such as TRANSFORMERS, LITTLEST PET SHOP, NERF, PLAYSKOOL, MY LITTLE PONY, G.I. JOE, MAGIC: THE GATHERING and MONOPOLY. The Company’s Hasbro Studios develops and produces television programming for markets around the world. Programming in the U.S. is distributed on The Hub TV Network, a multi-platform joint venture between Hasbro and Discovery Communications (NASDAQ: DISCA, DISCB, DISCK). Through the Company’s deep commitment to corporate social responsibility, including philanthropy, Hasbro is helping to build a safe and sustainable world for future generations and to positively impact the lives of millions of children and families every year. It has been recognized for its efforts by being named one of the “World’s Most Ethical Companies” and is ranked as one of Corporate Responsibility Magazine’s “100 Best Corporate Citizens.” Learn more at www.hasbro.com.
© 2012 Hasbro, Inc. All Rights Reserved.

Disclosure: I received a copy of the Transformers Prime Season Two Blu-Ray to try out and review. Opinions about it are 100% my own.