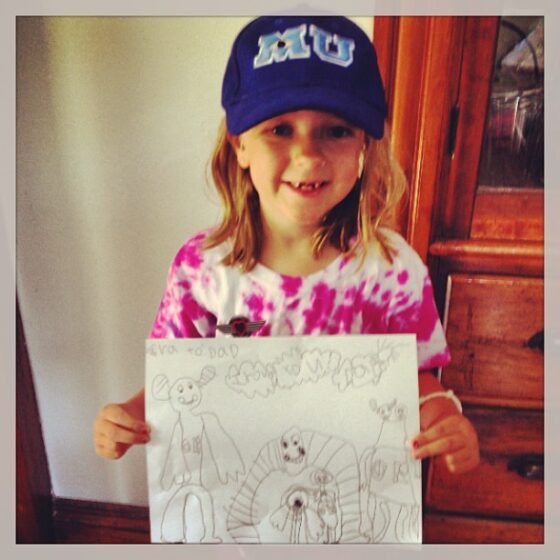 I attended a Press Event for Monsters University in April. Travel, Lodging and Food were provided. Today I saw the movie on my own, with my own money and I even bought snacks for me and Eva. Opinions of the movie are 100% my own.

I’ve been talking about Monsters University since before my trip in April and I’ve been pretty excited to see the full movie. Eva has been as well but she has been flip-flopping on whether or not it will be too scary. This morning I asked her if she wanted to go. She said no. Then I played a few of the trailers and she saw a trailer on TV and decided that she wanted to go. Okay, well, we’ll see how this goes.

Before we left the house Eva got out a piece of paper and she drew the image above. She drew that from seeing the trailers and more, she wasn’t looking at anything when she did it either. I think it is rather impressive for a five year old. She even drew herself into the photo. I gave her the MU hat that I got in California and wore the one that I bought. She asked if she could bring Art, one of the new monsters and a toy that Andrew picked out at the Disney Store while we were on vacation. I put all of it together along with the Monsters Inc. shirt I got Eva in California, but she opted to wear the tie-dye shirt instead. Ah… College. 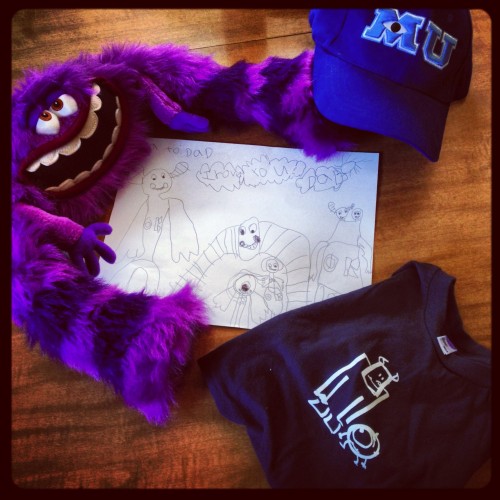 Okay, on to the movie. I had seen the first 40 minutes and loved it. I was eager to see more. Re-watching the first 40 minutes was just as good as seeing it the first time. I caught more jokes and more things that I missed the first time through. There are so many monsters in the background that it is a colorful feast for the eyes. In this movie we see giant sized monsters, flying monsters and swimming monsters. So many different monsters were created for the film to be in the background. There were also a good many monsters created to be in the foreground as well. There are six different fraternities and sororities in the film and each one has some standout members that are developed a bit more as characters.

The movie is about Mike’s story. from a very early age he decides that he wants to become a Scarer. To him this is the best possible job he could ever have and he works very hard to get into the Scarer program at Monsters University. The thing is, Mike is a cute little monster and no one takes him seriously as a Scarer. Mike works incredibly hard to learn everything possible about scaring. His rival is James P. Sullivan, or Sulley to his friends. Sulley comes from a famous Scarer family and he hasn’t had to work hard at anything, ever. Sulley figures that you don’t have to know anything about scaring, you just do it. This unlikely pair ultimately become a great team, but before that happens they have to get through college. 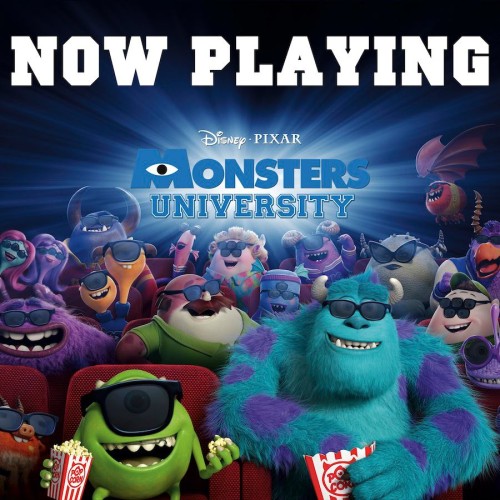 The movie is really about, what if you try your hardest to achieve your dream but you just don’t achieve it. I’m not giving anything away about this since this is a prequel movie and we know that Mike does not become a Scarer. The journey to that point is what is explored in this movie and I think it dovetails perfectly into Monsters Inc.

I loved the characters in this movie. My favorite new character is Art from Oozma Kappa. He is this weird looking monster with tiny arms and big giant legs and he moves in strange and funny ways. He also has some great lines and he’s like that weird kid in college that puts soda in his cereal and stuff like that. He’s an odd duck but people like him.

I also enjoyed the voice talents of Nathan Fillion. He plays the leader of a prestigious fraternity called ROR. When I first saw the film I totally missed that he voiced Johnny Worthington III but I completely knew it this time. He does a great job in the role.

Without giving too much away I can say that the movie was great and it did have some intense scary scenes, at least towards the end and especially for a sensitive five 1/2 year old. Even though Eva said that she would be able to see it and that she knew that everything turns out alright in the end (It’s a kids movie, of course it does) she still flipped out near the end to the point where I watched the end of the movie from the hallway of the theater. I watched and held her close and whispered reassurances to her and turned her away from anything that might have been too scary. One thing made us both jump when we though all the scariness was over. In the end however we were laughing and she was reassured and happy. We talked about the movie the whole way home. She even asked if there was a coloring page on the Monsters University site and there was.

If your child was not scared by Monsters Incorporated then most likely they won’t have any issue seeing Monsters University. Mine is just a very sensitive little one. There are a few things I need to remember for movies with the kids. Earplugs because the sound is too loud, a sweater because the theater is too cold and patience for me because you knew know how a kid is going to react.