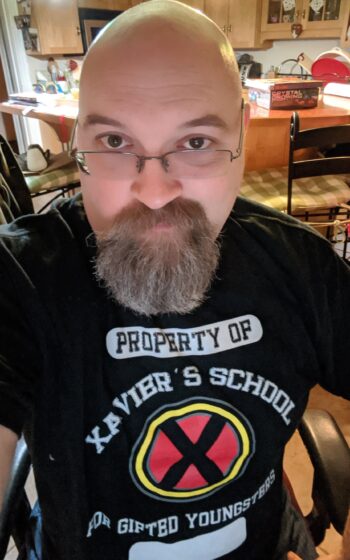 I finally did it. I finally went through with shaving my head. I actually had Allison and the kids and my self shave it while on a facebook livestream tonight after dinner. I can’t seem to embed this in this post so here is the link to Dad Gets a Quarantine Haircut. I had been threatening to do this for a while. Well, not so much threatening but talking about it and Eva saw it as a threat. She did not want me to shave my head. The funny thing is that when it was over and she looked at it she said, “Oh, that’s not much shorter than usual.” No, no it was not. But at the same time it really was. This was a whole new feeling for me and I’m now going to have to shave often to keep it looking the best it can be. I had become increasingly unhappy about my photos because of my hair. There was such a wide patch in the middle of my head that it looked like Moses parted it each morning. I called that area the valley of the damned because none of my follicles wanted to live there anymore.

Since I finished the Voltron set yesterday I had to decide what to do next in terms of my lunchtime video. Well, I had picked up a fun little LEGO Creator set last week that makes a pirate themed tree house and two other things. I had Andy help me out in the video and we built it together. I had considered making LEGO lunch all about LEGO Dimensions the video game but I discovered that the Toy PAd that I had for the Wii U would not work with the XBox One. I looked online and it appears that that device needs its own proprietary toypad. So, back to ebay I went for a toypad and also for a Skylanders portal of power. I thought, Hey, I bought Starlink for the XBox One and I could play that. I opened up the box and the game wasn’t inside. I had bought it new but now sign of the actual game. So crazy, and so back to ebay I went. More livestreaming of video games on the way.

Today Andy did his stripe test for karate from home. I took a video of him doing his form and several kicks. then I sent it in to be evaluated. He passed. Now I have to do my test.