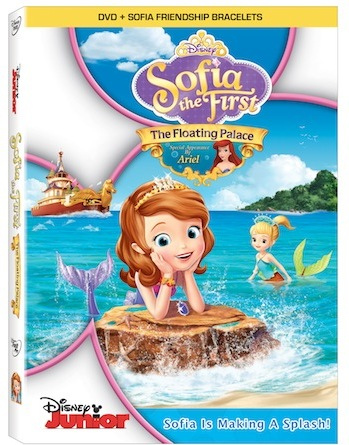 Sofia the First has been a cartoon staple in our house since it debuted. When the first primetime special, The Floating Palace, premiered we made sure to save that on the DVR. The kids have watched it dozens of times. It is nice to see that this is being released on DVD and that there are three bonus episodes included on the disc. Doesn’t hurt that we can free up some DVR space as well. Look for the DVD on April 8th, just in time for a nice Easter Basket gift.

SOFIA THE FIRST: THE FLOATING PALACE

Synopsis: Do YOU believe in mermaids? You will – when you set sail on a magical full-length adventure under the sea with Sofia the First! After Sofia helps a young mermaid named Oona, Sofia’s amulet grants her the power to transform into a mermaid and visit her new friend’s secret underwater kingdom. But when Cedric (disguised as a sea monster) plots to steal Oona’s enchanted Mermaid Comb, danger surfaces for both worlds. With a little help from special guest, Princess Ariel, Sofia embarks on an adventure to rescue Oona. Overflowing with oceans of song-filled fun – plus three more exciting episodes – Sofia the First: The Floating Palace proves that when families and friends work together, they can weather any storm and save the day!

Background: Disney Junior’s “Sofia the First,” which follows the adventures of Disney’s first little girl princess, Sofia, who is learning how to adjust to royal life after her mom marries the king, is the #1 TV series with Girls 2-5.* The November 24, 2013 premiere of “Sofia the First: The Floating Palace” became the #2 telecast in cable TV history in Kids 2-5 and Girls 2-5, and the #2 preschool cable TV telecast ever in Total Viewers and Women 18-49, behind only “Sofia the First: Once Upon a Princess.” **